Lofts, cupboards and sheds are being cleared out in Hanover ahead of this weekend’s first Brighton Jumble Trail. 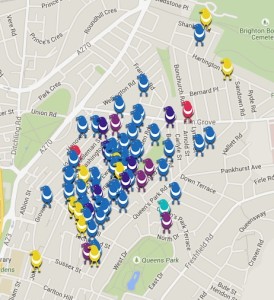 The trail, which will take place on Saturday from midday until 4pm, with almost 80 stalls in most streets in Hanover and the surrounding area selling anything from toys to vintage records, clothes and even honey.

The idea came from residents who wanted to do something similar to the Hanover Day festival, which as well as a parade and bands saw residents setting up bric a brac stalls on their doorsteps.

People in the neighbourhood wanted to revive the festival this year, but the costs and organisation involved in setting up an event on that scale were daunting.

So while plans for a future Hanover Day have not yet been entirely shelved, a Jumble Trail for this summer was suggested instead.

The date was chosen to coincide with two street parties in Windmill Street and Stanley Street, as well as the Tarner Community Project Summer Party.

Organiser Jenny McCall said: “We had the idea that people could have a clear out and set up a jumble stall right outside their own front door, creating a Hanover jumble trail winding up the hill.

“Windmill and Stanley Streets are also holding their annual street party on Saturday, so get some altitude and end your trail at the top of the mountain.”

An auction to raise money for the Windmill Street Party is also live, with lots including free pub meals, window cleaning, gig tickets and even a personalised cartoon of your house, with any excess funds going to the Tarner Community Project.

And hot on the heels of the Hanover trail, another is being held in Clifton Street in Seven Dials next month on Saturday, 8 August.