Police have published new CCTV images of two men wanted after a stag night attack in Brighton left a 43-year-old man with a broken ankle.

The victim was with his two brothers on a stag night in Brighton. They were making their way back to their hotel when they were confronted by three other men in King’s Road close to the junction with Middle Street. 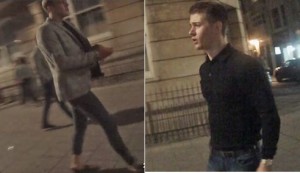 The brothers, who were all from Kent, were then attacked by the other men, at about 11pm on Saturday 25 April.

One was punched to the ground and suffered a badly broken ankle. Another of the brothers was also punched.

The attackers then fled.

The first attacker was described as white, about 5ft 9in tall and of medium build, with short cropped or shaved blond hair. He was wearing dark trousers, a light top and a light-coloured blazer.

The second attacker was described as white, about 5ft 9in tall and slim, with cropped dark hair. He was wearing a dark-coloured polo top.

The third attacker was white and slim. He was wearing a grey short-sleeved t-shirt.

Officers have managed to enhance CCTV images captured in the area that show two of the men they want to interview.

Investigator Lisa Baker said: “We need to trace these men so they can be questioned about the attack.

“We also need to speak to anyone who was in the area at the time of the attack, in particular, anyone who saw what happened or who saw the attackers fleeing afterwards.”

Anyone with information is asked to phone Sussex Police on 101, email 101@sussex.pnn.police.uk or contact the independent charity Crimestoppers anonymously on 0800 555111.