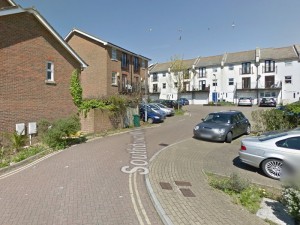 Southdown Mews, where one in eight houses is a party house. Image taken from Google Streetview

A planned six-month review of the measures was promised after the voluntary agreement with Brighton and Hove Holiday Rental Association (BHRA) was put into place last October.

But this has now been postponed until February next year, leaving those affected bracing themselves for another hen and stag party season full of disruption.

Former councillor Geoffrey Bowden, who chaired the scrutiny committee which developed the guidelines, told a meeting the Queen’s Park Local Action Team (LAT) on Wednesday evening: “I have had reports that the six month review is going to be dropped which is a bit disappointing.

“I have been inundated with emails and messages from people. Residents have given up phoning the council because they can’t get through or asking for a noise investigator. We now have two noise officers, and I suspect they will be chopped.

“The reason for the review being dropped is that we had had no complaints about noise, but when I was a councillor I seemed to be a lightning rod for complaints, and I forwarded all of them.

“I was told of one house where there was a football match at 11.30pm, with balls against neighbours’ windows.

“I have no doubt that if you complained to BHRAs they will say it’s not one of our members. They want to influence their members and promote good practice.

“If we could get everyone to operate on those lines, we would have a more peaceful and happy community.

“They are good money makers, and there is some argument that the money is sticky and benefits the wider economy, but they also take family homes out of circulation.”

Karen Edwards and Barry Dowty, who live in Southdown Mews where three out of the 24 houses are short term holiday lets, said the agreements drawn up by BHRA were not being observed.

These include notifying neighbours of existing and new holiday homes on an annual basis, providing contact details, employing a 24-hour noise patrol on weekends and putting a sign on the front of the party houses displaying a 24-hour complaint hotline number.

Mr Dowty said: “Taking our mews as an example, they were supposed to put something through everyone’s door to say this is where you complain, and who to contact. Nothing like that has happened and there are three of them in our mews.”

He also said that residents had given up complaining as nothing ever seemed to be done, and that problems peaked in the summer months, which might also account for the lack of reports since October.

A council spokesman said the review had been postponed in order to concentrate on the most pressing issues put before the council’s overview and scrutiny committee.

He said: “Progress against the recommendations from all previous Scrutiny panels are kept under regular review. At the first meeting of the new overview and scrutiny committee in June a very full draft work programme was agreed for the year ahead, including a routine monitoring report on short term holiday lets at the meeting in February 2016.

“In order to strike the right balance of new scrutiny work and the monitoring of previous panels, the focus of time and discussion at committee should be on those issues that are understood to be of greatest current concern, and are therefore being considered on an ongoing basis by the chair with the other party spokespersons of the committee.

“If fresh concerns are raised about a previous panel that is due for monitoring, including short term holiday lets, then this will be taken into consideration; no monitoring would simply be shelved.

“We would encourage ongoing issues to be reported to services, or to scrutiny, to help determine if the overview and scrutiny committee should be involved.”

The Brighton and Hove Holiday Rental Association was approached for comment, but did not respond by the time of publication.