Paramedics saved a man’s life this afternoon after he collapsed in the middle of a noodle bar. 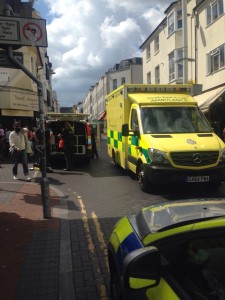 The man was halfway through his lunch at E Kagen in Sydney Street when he suddenly fell off his chair on to the floor at about 2.15pm.

Staff and diners rushed to his aid while one of the chefs called 999.

An ambulance and a fast response car rushed to the scene and five medics performed CPR on the unconscious man until he regained consciousness.

Jo Wadsworth, who was in the restaurant with her family when the man collapsed, said: “It was quite shocking to see someone being given CPR as everyone was having their lunch but the paramedics took really good care of him.

“The man was clearly very shaken from his ordeal, but the crew were able to get him on his feet before he was taken outside.”

As Sydney Street was closed to traffic today, the ambulance and response car parked in Trafalgar Street, blocking it to traffic for approximately 45 minutes.