Pride reveller pulled from under train at Brighton Station

A Pride reveller was pulled out from under a train at Brighton Station on Saturday night by bystanders after she fell down the gap between the train and the platform. 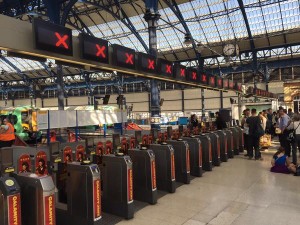 The woman slipped and fell under the stationary train as it stood at the busy platform shortly after 11pm.

But thanks to the help of fellow Pride-goers, she was quickly pulled to safety and escaped without any injuries.

One of the Good Samaritans, Milo Ridley, said: “It happened really quickly – we were just looking along the platform and this lady fell down the gap betwen the train and the platform. She was almost under the train.

“I just helped her out, grabbed her arm and pulled her out. I put her on her side as she was semi conscious.

“She wasn’t injured or cut or anything – the police got her up and she was alright.”

A spokesman for South East Coast Ambulance Service said: “We were notified of an incident at Brighton Station on Saturday night at around 11.10pm where a person had reportedly fallen onto the tracks next to a stationary train before being pulled up by bystanders.

“However, we were stood down by police as the person was uninjured.”