As the Albion’s footballers run on to the pitch for the opening fixture of the new season against Nottingham Forest on Friday evening, PC Darren Balkham will reflect on a very busy ‘close’ season of planning football policing operations in Sussex and Surrey. 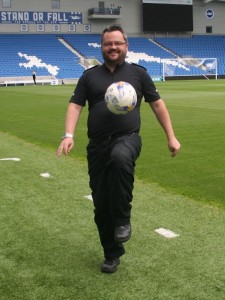 Darren is a dedicated football officer working with colleagues in other police forces and football clubs from all around England and Wales and sometimes overseas to ensure that everyone who goes to football matches can enjoy their visits safely. They also ensure that anyone with criminal or violent motives for attending football won’t get to see the match – sometimes for years!

He works with the security teams at Brighton and Hove Albion, Crawley Town and Woking and also provides advice to more than 300 other non-league sides across Sussex and Surrey. He oversees a team of 15 accredited officers and as soon as the fixtures were announced on June 17, he was busy making contact with all of the clubs that his three sides will be meeting over the next nine months. Negotiations with the Football Association at an early stage ensure that Albion and Crawley home fixtures never clash.

It’s a job that makes Darren the envy of quite a number of football fans who have come to know him over the 17 years that he has been undertaking the role, but he points out that even though he is a football lover, he rarely gets to see much of the action.

“Essentially, I’m a neighbourhood copper with three very specific communities,” he said. “Football policing has changed immensely over the years and the vast majority of security in and around the stadia is carried out by the clubs’ own teams.

“Working together we have developed a consistent approach to what are essentially private events and this has produced a tried and tested approach that has drastically reduced the need for police officers. Indeed, very often I’ll be the only copper who fans will see inside the ground.

“I’m really proud of the matchday operations that we run and any problems are now the exception rather than the rule. We apply the principles of community policing and it’s just as important to me to be high-fiving the kids in the front row as to be dealing with the occasional person who does step out of line. I know it’s working as there will always be a lot of reaction to an incident, invariably supportive of the clubs’ stewards and police, which years ago would scarcely have turned a head.”

This approach has endeared Darren to the fans who often speak to him about incidents away from the grounds and football altogether. He either deals with these himself or passes them on to colleagues in other parts of the counties.

Never off duty, he was on holiday in Orlando (where he took a day out to liaise with Major League Soccer colleagues!) when he received a call from an Albion fan who was on a train where another team’s supporters returning from a match were causing problems for fellow travellers. Darren called up a British Transport Police colleague, who was on holiday in Spain, and when the train arrived at its destination, officers were on hand to deal with the troublemakers. “Now that’s really international policing!” he chuckled.

His role involves being in attendance at home and away fixtures throughout the season and this led to him travelling 19,000 miles for the job last season. He knows hundreds of fans personally and many more know him through his Twitter account @suspolfooty. Some of his liveliest conversations come when travelling back from away matches where the team hasn’t performed well.

“I seem to find myself on the end of passionate and disappointed rants on the journey back, but I just have to tell them that I haven’t got a hotline through to any of the managers!” he said.

Part of Darren’s job is spreading the word to more than 300 non-league clubs in Sussex and Surrey and he acknowledges the work being done by security heads at the Albion and Crawley, Adrian Morris and Grant Ritchie, and Clayton White at Woking, in inviting new safety officers to their grounds to learn at first hand the importance of their roles. This helps to expand the consistent approach adopted at professional level across the footballing community.

Last year, Darren was successful in applying to join the UK football policing unit, which is funded by the Home Office and deploys officers to nearly all England away games.

“The idea is to assist local police in engaging with our supporters and in part, helping to dispel the reputation and often myths that surround England supporters.

“I’ve already been to Tallin for the game against Estonia and my tenure includes Euro 2016 in France and the World Cup in Russia in 2018. However, I don’t expect to be relaxing and watching the games. In fact, I’ll probably see less football than if I was at home with my feet up in front of the television!”

Those who still envy him the job may be asking where his allegiance really lies and he admits that he is always interested in the fortunes of Albion, Crawley and Woking, but his heart belongs elsewhere.

“It’s no secret who I support and I get plenty of banter both on social media and at matches as people know I’m a die-hard Manchester United fan.

“I’ve policed at every Championship, League 1 and League 2 ground in England and Wales, but never Old Trafford. I’ve always said that when United draw Albion at home, it will be the pinnacle of my career and I shall think about retiring. I might have to avoid the train trip back down south though, whatever the result!”

Look out for Darren this season around the grounds. Along with other dedicated football officers, he’ll be sporting a new strip of a half-blue and half-yellow top, but it’s the same home and away and you won’t find it in the club shops.