Bus driver retrieves cash after being robbed in Hove

A youth robbed a bus driver in Hove after being told that he couldn’t board because he didn’t have money for a fare.

The Brighton and Hove Buses driver – on the number 5 route – was robbed in Palmeira Square on his way towards Hangleton. 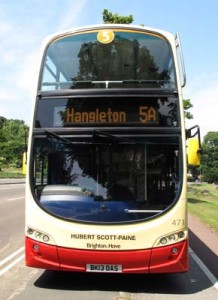 Sussex Police said: “Police are seeking witnesses to an incident in which a teenager snatched cash from a Brighton and Hove Buses bus driver after he was refused permission to board.

“The incident happened while the bus was stopped westbound at Palmeira Square, Hove, at around 1pm on Thursday (13 August).

“A youth who was told he could not get on because he had no money to pay the fare became verbally aggressive and lunged at the bus driver.

“He ripped open a pocket containing cash and made off but the driver, who was unhurt, managed to retrieve the money before the youth disappeared.

“The suspect is described as white, 5ft 6in, in his mid-teens and with dark hair. He was wearing a dark hoodie with a blue stripe on the arms, dark blue jeans and red and black trainers.”

Anyone who saw what happened or who has any information is asked to phone Sussex Police on 101, email 101@sussex.pnn.police.uk or call the independent charity Crimestoppers anonymously on 0800 555111.