The pioneering work of female scientists was celebrated at a symposium at Sussex University attended by 60 A level students from local schools.

The Rosalind Franklin Symposium honoured a chemist and x-ray crystallographer who was crucial to the discovery of DNA, the genetic information passed from parents to children.

Members of Dr Franklin’s family joined the 60 A level students and more than 200 scientists and academics from Sussex at the day-long symposium yesterday (Thursday 10 September). 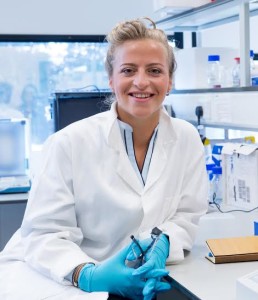 The line-up included eight leading figures from the world of science. The life sciences symposium highlighted the work of the current generation of women scientists and aimed to inspire the next generation.

Professor Serpell said: “Although female scientists are still very much in a minority in many areas of science, I’m proud to be part of an initiative at Sussex that is endeavouring to provide more opportunities for women academics.

“There are clearly many female scientists who are doing work which stands out in their field of endeavour and we must do more to inspire the next generation.”

“All of my family members made me aware of the work Rosalind did from a young age.

“I had an incredible teacher in junior school who had a big double helix who was inspired by her.

“Rosalind inspired me through inspiring people close to her. I would have been fascinated to meet her.

“In my first lecture at university there was a photograph of her on the screen … and her photo is in all my textbooks.” 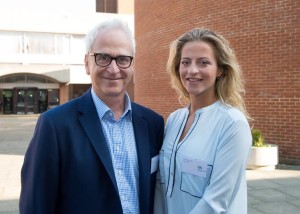 Hannah praised Professor Serpell and the teaching staff at the Falmer campus, adding: “She said that Rosalind was a massive influence to her.

“I love my course. And all my lecturers are great. Sussex is fantastic – and the way that Sussex really care about the students and their opinions.”

She said that she would encourage other girls and young women to give science a try. She said: “There are a lot of stereotypes but I’ve got the most wonderful group of friends.

“You can have an impact. You can actually make a difference.

“I really enjoy explaining what I study and learn about to people who don’t understand science.

“A lot of people think it’s scary but it’s not. Science should be accessible to everyone. I’m so passionate about it.

“Get involved with science. People think you have to be really intelligent. I’m not this crazily smart person.

“A lot of people perceive scientists to be socially awkward – and some are but mostly they’re not.”

Hannah’s father, Nigel Franklin, also attended the symposium in his aunt’s honour. He shared a quote from a letter that she had written to her father when she was a student at Cambridge University.

It said: “You look at science (or at least talk of it) as some sort of demoralising invention of man, something apart from real life, and which must be cautiously guarded and kept separate from everyday existence. But science and everyday life cannot and should not be separated.

“Science, for me, gives a partial explanation of life. In so far as it goes, it is based on fact, experience and experiment.”

Mr Franklin said the symposium in her name was quite topical as Nicole Kidman was about to star as Dr Franklin in the play Photograph 51 on the London stage.

Photograph 51 is the name given to an x-ray image that proved crucial in identifying the structure of DNA.

The play officially opens on Monday (14 September) and describes Dr Franklin as the woman who discovered the secret to life.

Mr Franklin said that 14 members of his family were already going to go together to see the show.

He defended his aunt’s reputation which was coloured by a difficult working relationship at the time when Photograph 51 was taken. Appreciation of her work and character have grown in the years since.

As well as her groundbreaking work in helping to understand DNA, she pioneered work on the polio virus and coal.

Mr Franklin also touched on the gender imbalance in science. He said that roughly equal numbers of boys and girls studying science GCSEs.

The gap, he said, widened at A level, degree level, postgraduate level and among academics.

Before the symposium Laurence Pearl, a Fellow of the Royal Society and head of the Sussex’s School of Life Sciences, said: “The University of Sussex is deeply committed to supporting female scientists and, in honour of Rosalind Franklin, ensuring their discoveries and work get the recognition they deserve.”

Professor Pearl added: “We are delighted to welcome such an impressive array of scientists and excited at the prospect of introducing them not only to fellow scientists but also to a sizeable contingent of 17 and 18-year-olds, who will be our scientists of the future.”