The Madeira Lift has closed “for the forseeable future” after last month’s floods damaged its power supply. 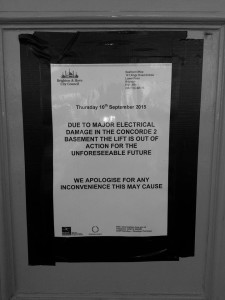 This month, a notice was put on the lift doors informing people that: “due to major electrical damage in the Concorde2 basement, the lift is out of action for the unforeseeable future [sic].”

It also apologised for any inconvenience this may cause.

A council spokesman said the basement was damaged during the storm on August 13, when large swathes of the seafront were flooded.

Southern Water has launched an investigation after claims a sluice gate in the storm drain running along the beach was left closed, stopping the flood water from escaping.

As well as Concorde2, Riddle and Finns, the Gym Group and Brighton Bike Hire were hit by flood damage.

A council spokesman said: “It’s not a problem with the lift itself but the power supply owned by UK Power Networks This would take some time to fix but in any case the lift would normally shut at the end of September.

“It’s expected the power supply will be sorted out over the winter so the lift can reopen as usual next Easter.

He added: “It has nothing to do with the condition of Madeira Terraces.”