The lack of public toilets on The Level has caused such an increase in antisocial behaviour in one Brighton street that residents are considering installing gates to keep the public out. 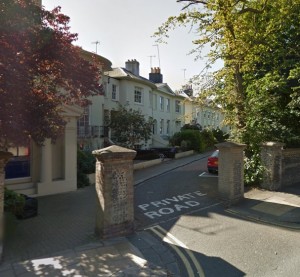 Since the award-winning regeneration of the Brighton Park, more people have been using the gardens at Hanover Crescent as either a toilet or a private place to take drugs, leaving behind smelly deposits and needles.

Residents believe this is largely due to the lack of toilets in the new park, which are now only open in the afternoons because of issues with vandalism and drug-taking, with an attendant hired over the summer to stop antisocial behaviour.

Park Crescent to the north of the Level recently installed new, larger loops of barbed wire in a bid to keep people out of its large, private communal gardens.

And now the Hanover Crescent Committee has applied for planning permission to install vehicle and pedestrian gates, plus spiked railings along the wall.

Committee member Neil Smith said: “Some people, especially those who live at the ends of the crescent and who are affected more, believe that there has been an increase after the regeneration of the Level and it’s certainly a true statement that there aren’t many public toilet available, and those close at night.

“The gates are one possible option of several that we are considering to mitigate these incidents.”

The committee has previously considered planting over the “secret path” which runs along the wall behind the bushes, but this was reconsidered after a resident started a petition to save it, which was supported by the Brighton Society.

Mr Smith said: “At the last AGM in May, the committee’s recommendation was not to do anything to the path until we had tried other things such as planting spiky bushes, more lighting, or the option of gates.”

The £40,000 cost of installing the gates and railings would have to be met by residents, who have not yet been consulted on the proposal, and the high price tag may mean the work is done in stages, or not at all.

The crescent was first conceived exactly 200 years ago, and the road and facades were completed in 1822, with each house then built by its respective owner.  All the houses, lodges, gates and wall were Grade II listed in the 1950s.