Tributes paid after Sussex cricketer dies at the age of 22

Tributes have been paid to Sussex cricketer Matt Hobden who has died in unexplained circumstances at the age of 22.

The body of the fast bowler was found by police at a property in the Scottish town of Forres, near Inverness, on Saturday (2 January).

Police are investigating his death but it is not thought to be suspicious.

Sussex County Cricket Club said: “Sussex Cricket is deeply shocked and saddened to hear of the passing of Matthew Hobden. 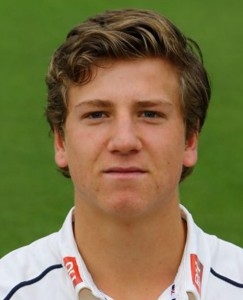 “Matthew was an exciting young cricketer with a big future ahead of him in the game.

“He was a fantastic individual who had progressed through Sussex’s Youth and Academy ranks, having been born locally in Eastbourne.

“He made his first class debut for Sussex in 2014 and had represented the county across all three formats over the past two seasons.

“He will be greatly missed.

“Sussex would like to offer their deepest condolences to Matthew’s family and friends at this difficult time.

“Players and staff will be offered as much support as is possible.”

“The death of the man, who is believed to be from Sussex, is being treated as unexplained.

“Inquiries are at an early stage but there are not thought to be any suspicious circumstances.

“A report will be sent to the procurator fiscal as is the usual standard.”

Hobden was one of six fast bowlers chosen to take part in the Potential England Performance Programme this winter.

The group had been expected to travel to Johannesburg to spend time helping the senior England squad to prepare for the one-day international series against South Africa.

The England side wore black armbands during the second test in Cape Town as a mark of respect.

Hobden used to play locally for the Preston Nomads and made his first class debut for Sussex at Hove in June 2014.

As well as showing promise as a bowler – with a career best of 5 for 62 against Warwickshire – he holds the record for a tenth-wicket partnership with the bat. He scored 65 not out – his top score – as he and Ollie Robinson notched up 164 against Durham.