Anti-cuts protesters to march on Brighton Town Hall this Saturday

Scores of people are expected to march through Brighton on Saturday in protest at “unprecedented” cuts to council services. 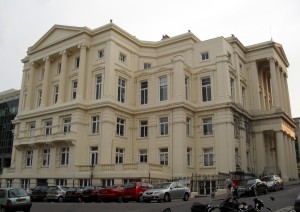 Brighton and Hove City Council is considering reducing or closing services in every department in a bid to balance the books after its Government grant was slashed.

Councillors say they are being forced to make the cuts or face Government officials taking over and slashing services even further – but protesters say instead of implementing a government agenda, they should reject austerity.

“Although these cuts are a result of the anti austerity policies of the Tory government it is the 54 councillors who will ultimately carry out these cuts.

“Whatever these politicians tell us they could reject these harsh cuts. Hundreds of jobs are under threat, family centres will shut, day centres for the elderly will close and mental health services will shut. March and demonstrate against these cuts, march from the Level to Bartholomew Square.”

However, the march has been criticised by Labour councillors, who say that they have no choice but to set a legal budget and called on the unions to direct their protests at the Government instead.

Council leader Warren Morgan said: “We are losing a third or more of our funding for local services, all of the grant from government, over the coming three years. At the same time the costs of providing social care services are increasing rapidly.

“With over £140 million taken out of the council’s budget by the Conservatives, we will not be able to afford to pay for the same level of services we do currently and still set a legal budget.

“We are working hard to keep redundancies to a minimum, find different ways of delivering services, raise income from other sources, and find innovative solutions to the extremely difficult financial situation that we and most other councils are facing.

“It is the job of unions to represent their members, but they need to join with me in taking the fight to Government, not the town hall. I have and will continue to make the case to Government ministers for the funding our services need.”