Teen robbed at knifepoint in Portslade

Police are investigating an incident in Portslade on Saturday, 20 February, in which a 17-year-old boy was robbed at knifepoint. 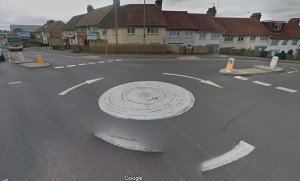 It happened some 40 minutes after midnight when the victim, walking north along Trafalgar Road, was crossing the roundabout.

He noticed a man running towards him from the direction of Shelldale Road, and this man then held a knife to his chest and demanded cash.

But after the victim showed the suspect an empty wallet he ran off, telling him: “Don’t call the police”.

The suspect is described as a white man with tanned skin, 5ft 7in, wearing a dark hoody with the hood up and dark tracksuit bottoms.

Anyone who saw what happened or who may have other information is asked to email 101@sussex.pnn.police.uk or call 101, quoting serial 49 of 20/02.