An online game of house colour snap has seen enterprising Brightonians taking pictures of cars, dogs, bicycles camper vans and even their children next to matching colour Hanover homes. 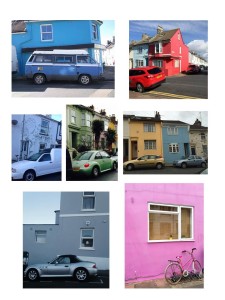 The fun first started a year ago by Amaze charity fundraiser Nicky Bagilhole, who was amused when she saw cars parked next to houses of the same colour in her neighbourhood, and shared the joke on the local Facebook group.

Since then, it has taken on a life of its own, and now the best images are set to be made into a charity 2017 calendar for Amaze. 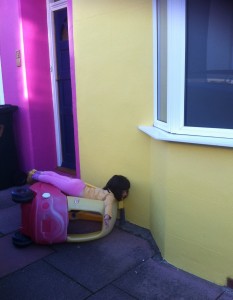 This picture by Fanny Arbuckle of her four-year-old daughter Zaya in a ride-along toy car will have pride of place, having been liked on the Hanover Community Notice Board by 700 people since it was posted yesterday.

Fanny said: “I love looking at the board – everyone’s witty and lighthearted and it’s a melting pot of creative and clever people.

“I picked up this free toy car from an ad on the board, and when Zaya tried to ride it along the pavement, she couldn’t get through because of all the parking (which is another hot topic locally!)

“So I let her ride it under close supervision in the middle of the quiet road and took a quick picture as it looked so brilliant.”

Fanny posted that picture on the board, and when a commenter mock-chided her because the car didn’t match the houses, the gauntlet had been well and truly thrown down.

“Zaya’s only four and didn’t really understand what we were doing at first, but when I explained why it was funny, she was really up for it.”

The picture above was taken in Toronto Terrace at the top of the hill, with the toy car “crashed” onto the pavement and Zaya balanced on top to complete the match. 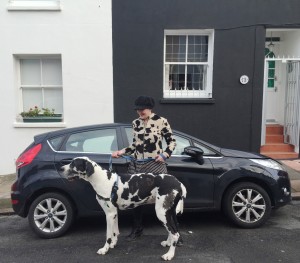 Nicky Bagilhole, who herself features in this pictures walking her neighbour’s Great Dane Gus, said she’s over the moon at how the game has taken off – and is hoping to now put it to a worthy use raising money for Amaze.

She said: “I love the colourful place where I live, the people, the houses and of course the matching cars. I first shared photos of matching houses and cars with Hanover Community Notice Board about a year ago and the concept immediately caught the imagination of the creative people on the hill. 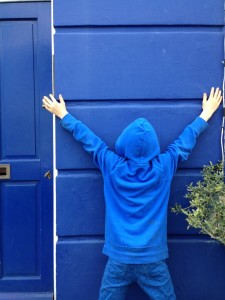 “It has since progressed to a bit of a game, which includes people in the shots and there is pretty much a photo shared to brighten up every day.

“I can’t take credit for the pictures, but I do want to celebrate them. So I am collecting them all and will produce a calendar in the autumn for local charity Amaze who support families with disabled children, many of whom live in Hanover and the surrounding areas.” 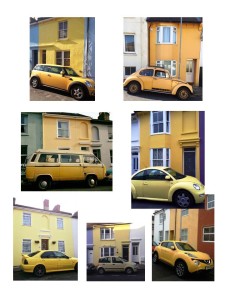 The calendar is also set to feature a reference to another meme from the Hanover Community Notice Board – the convention that if you post a picture of a lost item such as a toy or glove, you must include part of your shoe in the picture.

The trend was inadvertently started by one community minded resident, Ken Frost, and a picture of his pointy white shoe will be included poking into the front cover of the calendar.