A former Brighton coffee shop has been taken over by squatters. 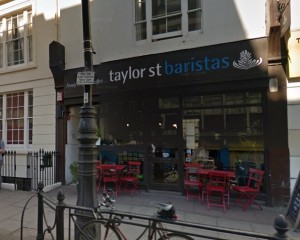 Taylor Street Baristas closed in November after its owners decided to concentrate on their branches in London.

Just over a week ago, squatters broke in and took it over, and since then windows have been broken and the interior of the shop smashed up.

One passer by, Carly Wilson, who saw trouble kicking off outside the squat on Wednesday, said: “There was a bunch of nutters kicking the door in and the place looked all smashed up. The place is screwed, windows smashed, loads of randoms in there.”

A spokesman for Stiles Harold Williams, which is marketing the leasehold, on offer for £19,500 a year, said: “We are awaiting the court date to have them removed.”

A police spokeswoman said: “We were called to a report of a fight in Queens Road, Brighton, at 1.30am on Wednesday (13 April) outside the closed down Taylor Baristas shop.

“We attended but all was in order.”