Academics strike over pay at Sussex and Brighton unis tomorrow

A row over pay will see walkouts at both the city’s universities tomorrow and a rally on the seafront in the afternoon. 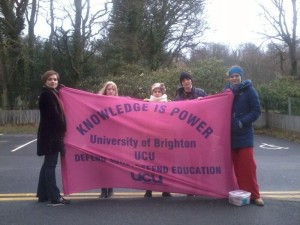 UCU members will also attend a rally at the Old Ship Hotel in Brighton from 2pm.

Staff will also begin working to contract from tomorrow, which means they will refuse to work overtime, set additional work, or undertake any voluntary duties like covering timetabled classes for absent colleagues.

If no agreement is reached in the coming weeks, members have agreed to further strike action targeting open days and graduation ceremonies in June and July. The union is also beginning preparations for a boycott of the setting and marking of students’ work.

The dispute has arisen following a pay offer of just 1.1% from the Universities and Colleges Employers Association (UCEA). UCU said universities could afford to pay more and the latest offer did little to address the real terms pay cut of 14.5% that its members have suffered since 2009. The squeeze on staff salaries comes despite pay and benefits for university leaders increasing by 6.1% in 2014/15.

Regional official Mike Moran, said: “A 1.1% pay offer is particularly insulting when we know vice-chancellors have had over 6%. After years of pay restraint and constant demands to do more for less, staff have said enough is enough.

“Industrial action which impacts on students is never taken lightly, but members feel that they have been left with no alternative. It’s time for universities to invest properly in teachers, researchers and administrators. The employers need to come back with a better offer which reflects the hard work of staff.”

Two thirds (65%) of members who voted backed strike action and three-quarters (77%) voted for action short of a strike.

A spokesperson for the University of Brighton said: “We will be ensuring that any disruption is kept to a minimum and on both days the university will remain open for business as usual.

“We are not anticipating any disruption to scheduled exams and assessments.”