A person has been stabbed in Portslade and a man attacked with a wooden stake in a nearby park in a separate incident.

The person was taken to the Royal Sussex County Hospital, in Brighton, but has since been released.

Sussex Police were unable to say today whether anyone had been arrested in connection with the incident which took place yesterday (Friday 3 June). 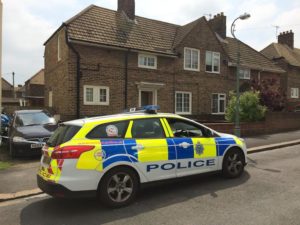 A semi-detached house in St Nicholas Road was still cordoned off this afternoon where one neighbour said that there had been a fight and his neighbour’s front door was kicked in.

Yesterday the whole road was taped off for several hours as was the nearby St Andrew’s Road entrance to Vale Park where a man was attacked in a separate incident.

The victim spoke to youths who were interfering with tree stakes in the park and, after being verbally abused, he was attacked from behind with a large wooden stake.

The matter was reported to Sussex Police yesterday afternoon although, again, the force was unable to say today whether it had managed to find and arrest the suspects.