Brighton shopkeeper blames Brexit as she closes after 22 years

A Brighton shopkeeper claims Brexit has contributed to the demise of her business after 22 years of trading.

Emma Plus, a designer clothes store for plus-size women, opened its doors in Church Street in 1994.

Shop owner Emma Hayes said: “We have found it rather difficult in recent years to trade to the level that we would like. The internet, costly parking (and) the general decline of the high street have all told on us.

“Also, I do believe that there has been a recession for parts of the economy which began in the crash and has never really gone away.

“The thing that actually finished us off once and for all, though, was Brexit. From the moment the referendum campaign started, we found our customers were extremely anxious and were cutting back drastically on their spending.

“I don’t know whether it was just the particular profile of our customers or whether it’s retail generally. I think that very few of my customers voted for Brexit and many are very angry at the result.

“In the past few months we have been facing days when no one whatsoever has even been walking through our door. This means that my company is not trading solvently.” 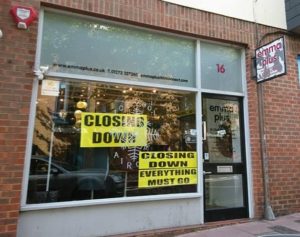 The store has also had problems with suppliers recently, with all of their clothing coming from Europe.

Ms Hayes said: “I had to think about whether I could, in all good conscience, agree to have £40,000 of new autumn stock sent into this shop when there appears to be no reason to think that we have the trade to finance the payment of that stock.

“I wouldn’t like to encumber other businesses with debt on our behalf.”

Despite making less profit this year than usual, Ms Hayes had planned to keep the shop open as she believed that things would improve with increased footfall from John Lewis.

The popular department store has bought the Boots site just round the corner in Queen’s Road, on the corner of North Street, opposite the Clock Tower.

She said: “I had to think about my (and my suppliers’) liabilities and consider if it were ethical to continue.

“I have loved working here. It has been amazing and I have been so lucky. I’ve loved my working life, which is something that not everyone can say.”

The shop is holding a closing down sale which is due to end on Thursday 22 September.