Photos have been released of a man police want to speak to in connection with a robbery at a cash machine in Hove. 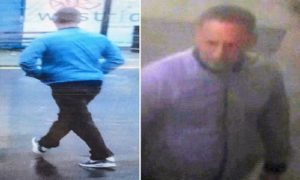 The 30-year-old victim was withdrawing cash from a NatWest Bank ATM in Tisbury Road at 2.40pm on Monday, August 1, when he was approached from behind and threatened with an unknown sharp object. The victim didn’t believe it to be a knife, but it was pushed hard into his back causing a raised and an open scratch.

The man made off with the £10 that the victim had just withdrawn. He is described as white, in his mid-40s, 5′ 10″-5′ 11″, of slightly larger than average build, with stubble on face and close shaven brown grey hair.

He spoke with a British accent. He was wearing a sky blue bomber shell suit style jacket with dark blue collar, cuffs and waistband, dark or navy jeans and blue/grey Nike Airmax trainers.

Anyone who recognises the man or has any other information about it is asked to email 101@sussex.pnn.police.uk or call 101 quoting serial 978 of 01/08. Alternatively, you can contact the independent charity Crimestoppers anonymously on 0800 555 111 (www.crimestoppers-uk.org).