Two Brighton men have been arrested after a young man was stabbed on Brighton seafront in the early hours of Saturday morning. 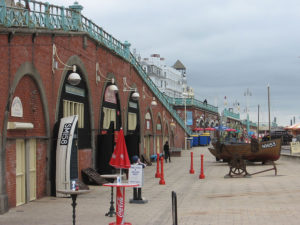 The lower esplanade near where the attack happened. Picture by Alex Gunningham on Flickr

The 24-year-old victim is still in hospital following the attack, which happened at around 2am on the Lower Esplanade on Brighton Beach opposite the junction with Ship Street.

The man, from Croydon, suffered a single stab wound to his chest and was taken to Royal Sussex County Hospital where he remains in a stable condition.

One of the suspects was seen to run from the scene and threaten someone else near to Ship Street before being arrested.

Two men, both local, were arrested nearby. An 18-year-old man from Brighton and a 22-year-old man were both arrested on suspicion of GBH and possession of a bladed article.

Detective Sergeant Cheryl Lewendon said: “The victim was rushed to hospital where he is still being treated, thankfully he is in a stable condition.

“We have arrested two men but believed one other man was also involved. He is described as white, around 20-years-old, slim, around 6ft and wearing dark clothing.

“We are appealing for any witnesses who saw the altercation or has any information to come forward to police. Alternatively, you can call the independent charity Crimestoppers anonymously on 0800 555 111 (www.crimestoppers-uk.org).”

Both men have been bailed until December 19 while investigations continue.