An emergency meeting is to be held this evening in a bid to combat an outbreak of antisocial behaviour which risks turning a small Brighton park into a no go zone. 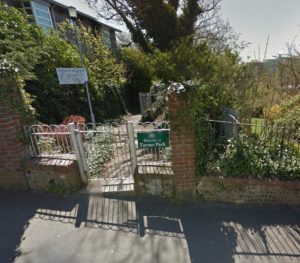 Over the last few weeks, Tarner Park off Sussex Street has been hit by acts of vandalism, arson and burglary, all committed late at night, as well as yobbish behaviour, swearing and motorbikes being ridden through the park at other times.

The park, which is next to Carlton Hill School and Tarnerland Nursery, is also home to the Tarner after school club, and parents are already becoming wary of going into the park as a result.

There are fears the problems could escalate yet further if nothing is done to stop those responsible.

And those who help look after the park warn that the same fate could befall other parks in the city as the council copes with massive cuts in the parks budget by giving more responsibility to residents groups and volunteers.

Emma Jacquest, CEO of the Tarner Community Project which runs the after school club said: “This has been escalating since early summer when they ripped our external notice boards off the building and our lovely rose arch to the garden and set fire to these, they then set fire to our new bin.

“Now they have broken into our storage container and stolen all the bikes – in total approx £2,000 and the other night they attacked the floodlights.

“The police advise us to inform them of everything that happens however small and install CCTV, otherwise as many of these incidents happen in the middle of the night, they will never be able to catch these criminals. We are looking into the costs for CCTV but I think this may be too expensive for us.

“My greatest concern is this group is growing in numbers and their activities are getting more dangerous. I am aware this is spilling out into the local streets too, so urgent action needs to be taken now.”

She added: “This is happening at the same time as the parks consultation, and the council are already not making repairs to things when they break. As the lights break, they’re not replaced, they can be gone for a year or two.

“In the consultation, there’s quite a lot of onus on residents and local people taking on the maintenance. We are already doing that, and I’m not alone in thinking this could be an example of parks becoming no go zones.

“Without structured support, who’s going to look after the parks? As residents, we can’t throw people out of the park, we don’t have any power at all, but obviously it has a massive impact on the whole area.”

A spokesman for Sussex Police said: “The central Brighton neighbourhood policing team is fully aware of anti-social behaviour problems in Tarner Park and the most likely times when these are occurring.

“Patrols in the area are being increased and police community support officers aim to attend a residents’ meeting on Monday (17 October) when the issue will be discussed.”

The community project hopes to be able to reclaim the value of the bikes via insurance. It’s urging anyone who sees antisocial behaviour, or has information, to call 101 or email 101@sussex.pnn.police.uk.

The meeting will be held today at 6pm at the Tarner Community Project.