Albion reclaimed top spot in the Football League after cruising to victory against Queen’s Park Rangers.

The Seagulls could end 2016 as the Football League’s top club, 20 years after they were rock bottom of it. A victory against Cardiff on Friday would ensure a poignant and superb turnaround in the club’s fortunes.

Albion went ahead in the 11th minute. Dale Stephens wove his way towards the Rangers defence and played and excellent ball to Sam Baldock who side-stepped Nedum Onuoha and lashed the ball home from 20 yards.

Rangers had been equal to Albion up to this point and dominated most of the rest of the half.

Gaetan Bong had a rare effort on goal and Glenn Murray headed wide from five yards out when superbly placed to double Albion’s lead.

Albion finished the half strongly. Stephens and Anthony Knockaert both saw efforts go close. Knockaert’s free kick landed on the roof of the net.

The Seagulls were much quicker to close Rangers down as the  second half got under way.

March broke clear down the left but his cross was cleared away from the six-yard box as Albion struggled to get players forward.

Then March worked an opening for himself only to see his shot saved by Alex Smithies when one on one.

The rejuvenated Knockaert was running at the Rangers and causing James Perch some hard work.

As Albion pushed, Stephens tried to seize on a loose ball in the box. Luongo just got there first but clattered Stephens to the ground.

Referee Keith Stroud, who seems to be at the Amex even more than Sky presenter Peter Beagrie, had no hesitation pointing to the spot for Albion’s third penalty in the past two home matches.

Murray dispatched his 15th goal of the season to give Albion a comfortable cushion. 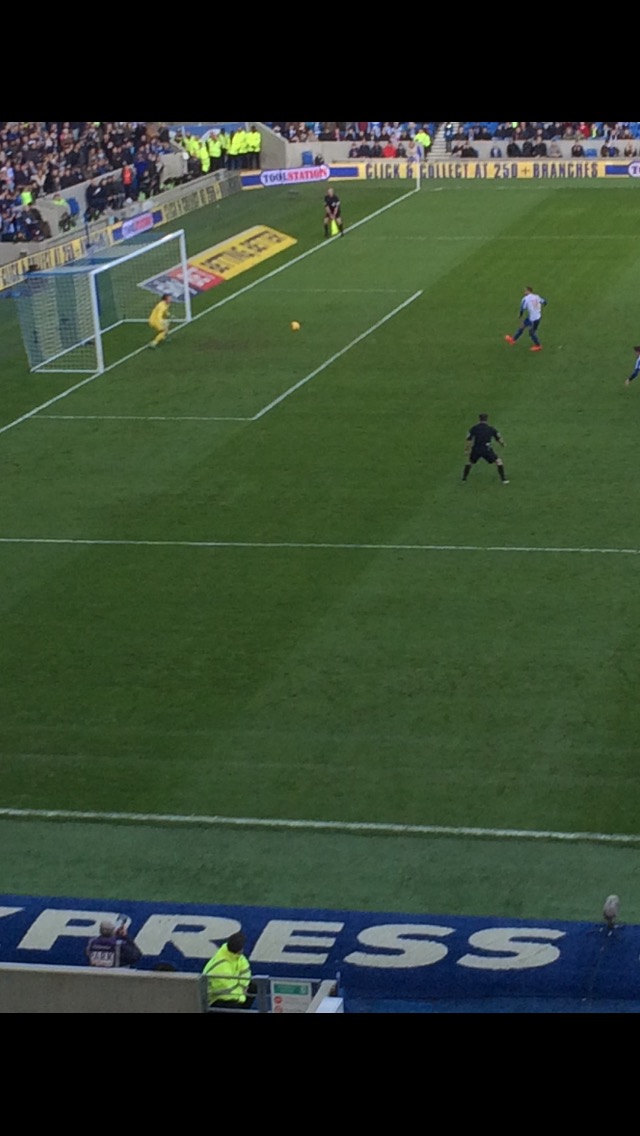 However, Stroud, who must almost count as a Brighton resident, gave Albion a belated Christmas present and sent QPR skipper Onuoha packing.

Two down and a man down Rangers knew the game was up.

Albion turned on the style while the Albion fans in the West Stand taunted Rangers boss Ian Holloway that he was getting sacked in the morning.

Albion frustrated the QPR players by stringing at least 25 consecutive passes together to the delighted chants of “Ole” from the crowd.

It was reminiscent of the famous Leeds v Southampton match in the mid 1970s when  Leeds kept the ball for over two minutes with series a flicks and back heels which prompted commentator Barry Davies to exclaim: “Poor old Southampton just don’t know what day it is.”

With 21 minutes still to play,  Knockaert combined well with Bruno Saltor and Stephens to fire under Smithies to give Albion a 3-0 lead.

The Frenchman avoided the congratulations of his team-mates,  ran to the touchline and held up a picture of his late father who passed away last month.

Sylla had a chance to grab Rangers a consolation but Stockdale, who had little to do in the second half, was equal to his header.

Albion are top, two points clear of Newcastle at the summit of the Football League.

May is a long way off. But, by Easter, Albion could have one foot and four toes in the Premier League.

The horrors of staring Football League relegation in the face, as they were this time 20 years ago, seem a million miles away.

But many things about Brighton and Hove Albion are a million miles (or pounds) away from what they were in 1996-97.

Cardiff come to the Amex on Friday as the Seagulls look to finish off a great year in style.