Labour has expelled a newly elected member of the Hove constituency party’s executive committee after less than a fortnight. 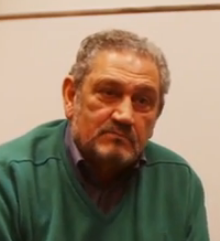 Riad El-Taher, 77, was thrown out after it emerged that he was jailed for 10 months for buying oil from Saddam Hussein in breach of United Nations sanctions.

Mr El-Taher has spoken openly about his prison sentence during discussions on the Middle East.

But even though it was six years ago the party was quick to respond when the details were published in the latest issue of the satirical magazine Private Eye.

The report in Private Eye said: “Nothing makes supporters of Jeremy Corbyn angrier than the suggestion the Labour leader and his comrades endorse dictatorial movements and regimes.

“So you might think Momentum would stay away from ex-cons with alliances to criminal dictatorships. Not so.

“Last week Momentum won nine of the ten executive seats at the AGM of the Labour party of that Leningrad of the Sussex coast, Brighton and Hove.

“Heading its list of winners was Iraqi businessman and British resident for 20 years Riad El-Taher.

“‘I have been an active campaigner on issues to do with the Middle East,’ he announced, ‘and strongly believe that human rights should be central to an ethical foreign policy.’

“He was certainly active in the Middle East. In 2011 El-Taher stood trial at Southwark Crown Court for breaches of the UN sanctions on Iraq.

“Admitting having made payments totalling $501,934 in 2001, El-Taher insisted his oil deals with Saddam Hussein were motivated by a desire to ‘alleviate the suffering of the Iraqi people’, and he persuaded Tony Benn and Tam Dalyell to support his plea that he was nothing more than a misunderstood altruist.

“Passing sentence, however, Judge Nicholas Loraine-Smith said: ‘It seems to me that your primary motive was financial.’ The judge sent him down for 10 months.”

Ivor Caplin, the former Labour MP for Hove and a Defence Minister following the 2003 invasion of Iraq, said “At no time did Mr Riad tell either officials or local members of his serious conviction. There is no place for his lack of integrity by not informing people.

“I am pleased that this matter has been dealt with swiftly by the Labour Party and that he has been properly expelled from membership.”