Hove Civic Society has come out in favour of plans to build dozens of flats on the derelict site of the old Sackville Hotel on the seafront.

It said that the initial proposals – to build 98 flats in a 17-storey tower in Kingsway – commanded little support.

But the applicant, Hyde Housing, had carried out a serious consultation and come up with a better design for a smaller number of homes in a building that wasn’t nearly as tall.

The new scheme proposes 60 flats in a building ranging from four to eight storeys in height – or about 80ft (25 metres) tall.

In a letter to Brighton and Hove City Council, the society said: “Hove Civic Society’s committee has considered the application as submitted and has also had the benefit of a presentation by the architects of the scheme and discussion with other civic bodies represented at the council’s Conservation Advisory Group.

“We support the application in principle, subject to satisfactory planning consideration of factors such as car parking and privacy of neighbours, which have been raised in public comments.

“As is well known, the previous application to develop this empty site commanded very little support from across the community for a number of reasons, not least the height and mass of the proposed building.

“We welcome the fact that the applicant has undertaken a serious process of consultation and engagement with the community in preparing the new application and has shown openness and flexibility in trying to address local views and concerns.

“The result is a proposal of notably higher quality than the previous application and one which is much more in keeping with local opinion.

“In terms of design quality, we particularly welcome the clear impression made by its four vertical ‘bays’, which should fit well with the overall rhythm of neighbouring buildings in the streetscape of Kingsway. 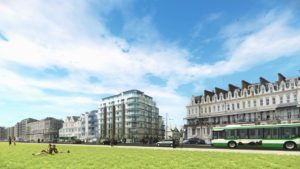 “The former Sackville Hotel which occupied this site was an imposing if rather quirky four-bay building and the proposed design should be a strong and attractive successor to take its place in the streetscape.

“We also welcome the scaling down of the new building as it turns the corner from Kingsway into Sackville Gardens.

“This is helpful in creating a transition, in scale and style, to the late 19th-century houses on the western side of the street.

“Also helpful is the placing of the vehicle entrance, marking a clear physical separation between the new building and the rest of the street.”

The new scheme has attracted far less opposition than the previously proposed Sackville Tower, with most objections relating to parking problems, the height of the building and concerns about second home owners.

In a planning statement, consultants Iceni Projects said that the overall height was in keeping with a number of seafront buildings just to the west of the King Alfred Leisure Centre.

Some objectors believe that any new building should be restricted to four storeys because it is on the edge of a conservation area.

Iceni Projects pointed out that it is also a council-designated tall buildings corridor 500 metres from the King Alfred where the council has already granted permission for a much taller scheme.

And although the planning permission has lapsed, the council is behind a scheme that is likely to lead to at least one block of flats about 18 storeys high.

Pre-application feedback sent to Iceni Projects by the council said: “The height, scale, bulk and vertical rhythm of the proposed new building, both to the seafront and the transition to the lower buildings in Sackville Gardens, would appear to be appropriate in this location.”

The council’s Planning Committee is expected to decide whether to grant planning permission, with a target date of the end of June.