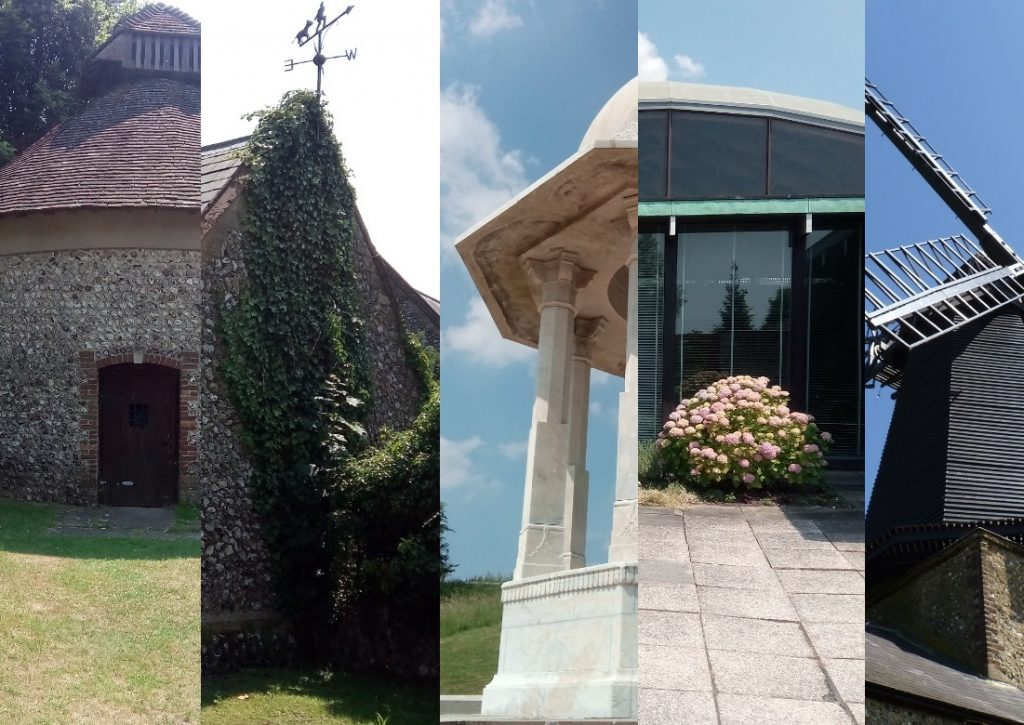 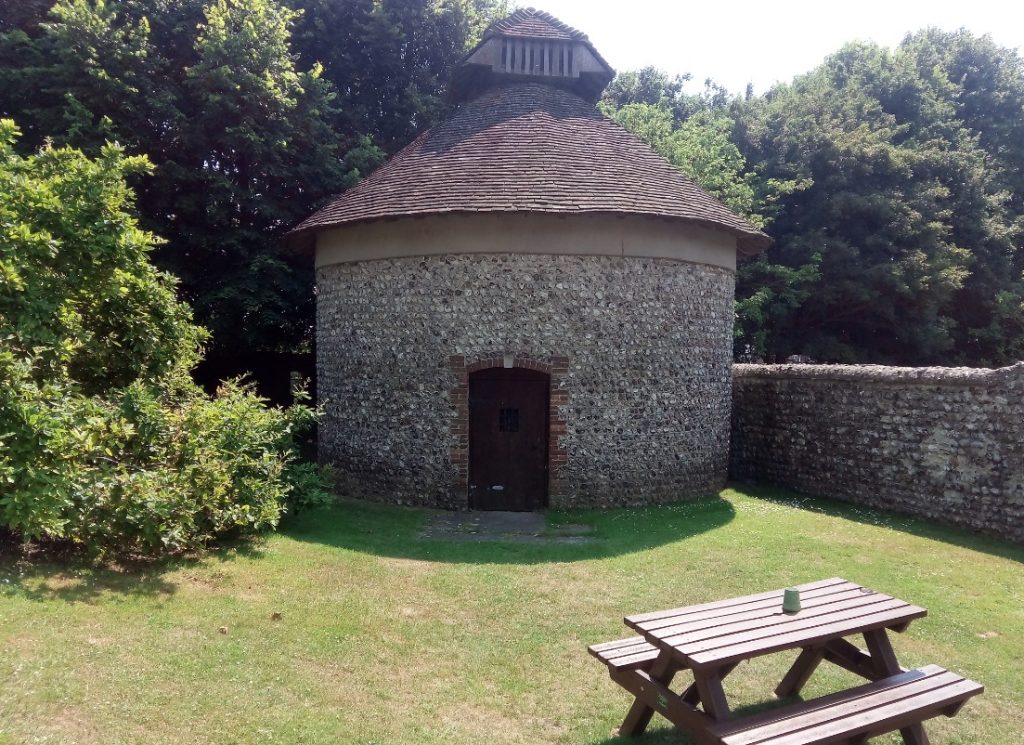 This 17th-century dovecote stands in the grounds of Hangleton Manor in Hangleton Manor Drive, which is said to be the oldest secular building in Brighton and Hove and dates from 1540. The circular dovecote has reputedly been haunted by ghost pigeons on the count of a monk placing a curse on it way back in its early days because he was angered by the droppings left by the birds.

The dovecote is built of small flint cobbles laid in a coursed formation and its cone-shaped roof is laid with tiles of clay which sits on top of a frieze of cement. The north facing wooden door has a glazed grille of wrought iron. Luckily for us it has been impressively restored in the 1980’s by a group of volunteers from a ruinous state. As the walls were crumbling and the roof had caved in and its distinctively designed combined perch and ladder, which resembles a gate, was renewed. It has held more than 500 birds in accommodated blocks of chalk. 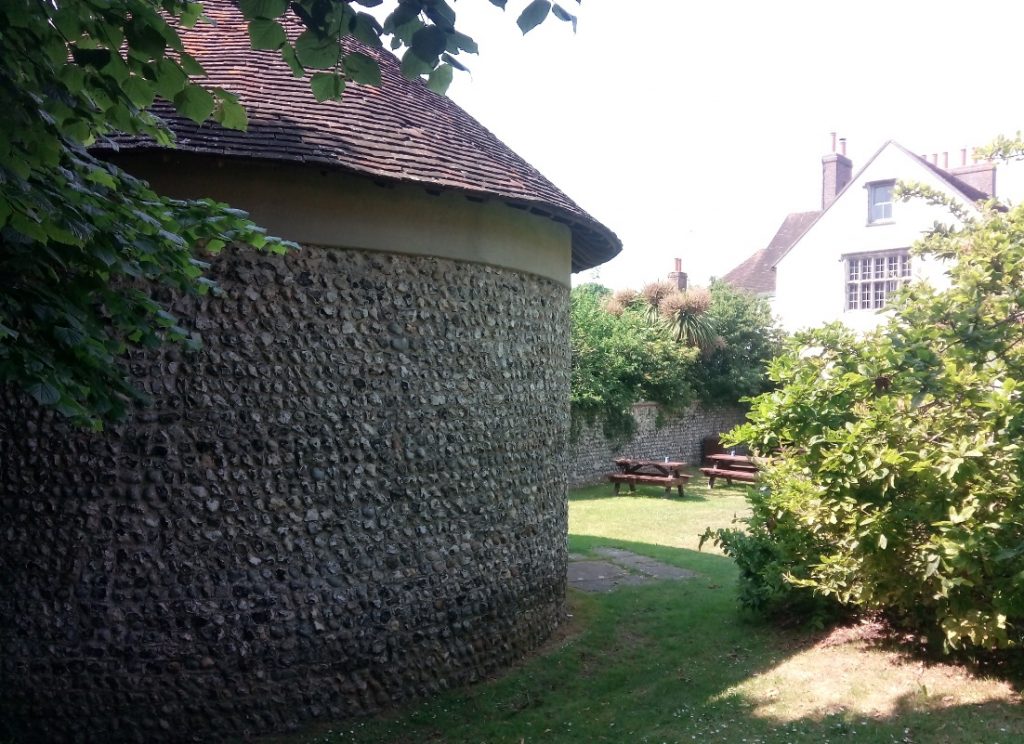 The Dovecote in the garden of Hangleton Manor

Very close by is St. Helen’s Church, with its 11th Century flint nave, which is the oldest architectural structure surviving in Brighton and Hove. 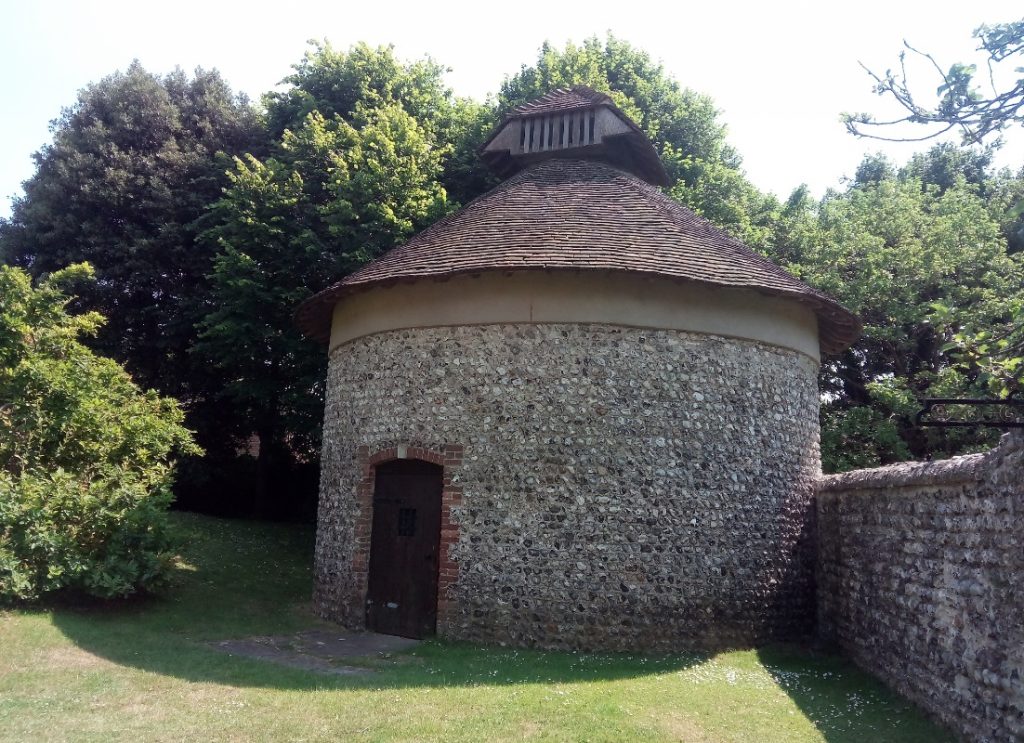 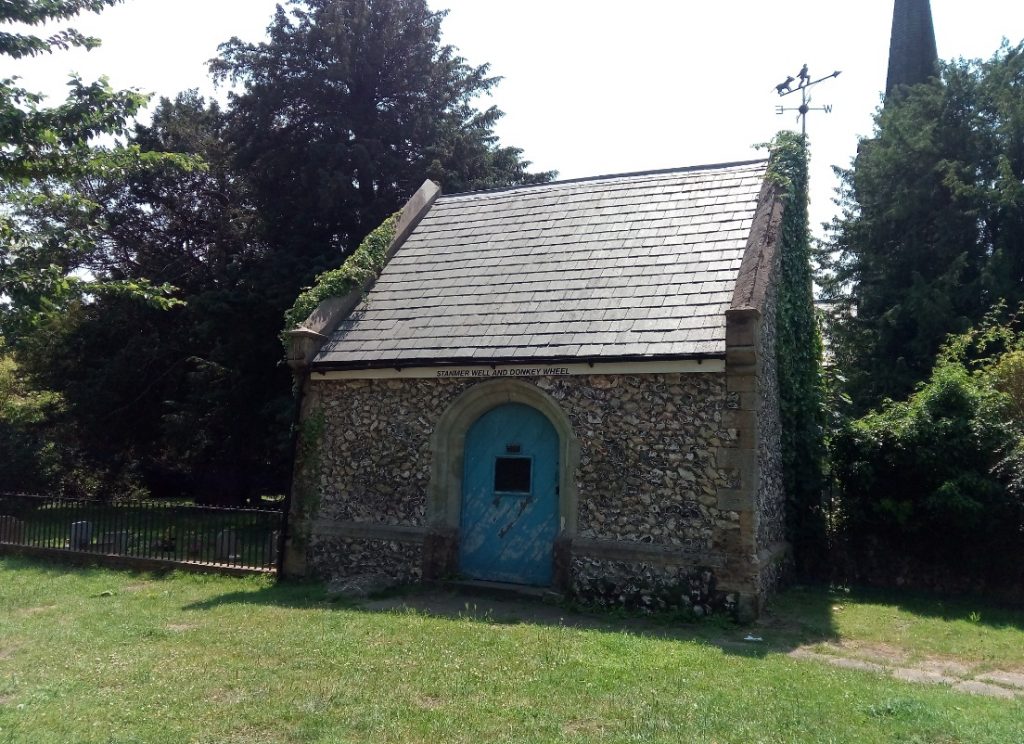 Sitting within Stanmer Conservation Area and hiding behind the knapped flintwork exterior and slated roofed Early English style Stanmer Church within its churchyard is the Stanmer Well and Donkey Wheel.

This unusual well house was rebuilt 1838, which was exactly the same time as the building of the new Stanmer Church as commissioned by the landowner, the third Earl of Chichester, Henry Thomas Pelham. His family has begun their association with the village in the 16th Century and took ownership of the whole estate and its lands in the early 18th Century and the nearby Grade I listed Stanmer House was built in 1722. The Pelham’s then demolished the original houses and buildings of the old village and thus created the estate-village you see today. 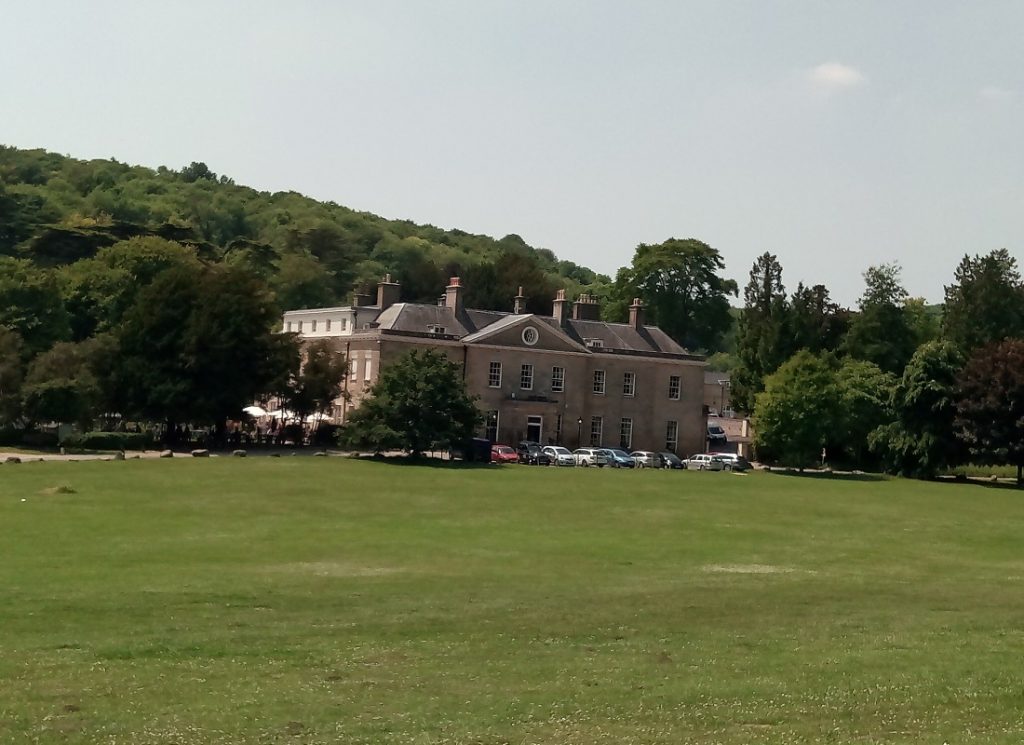 Stanmer House near the Donkey Wheel

The rare vertically mounted donkey-wheel is 13ft in diameter and was powered by a donkey walking a circular path around the well up until 1870 and then by a man up until 1900! The well was dug in the 16th Century and is an amazing 252ft deep! 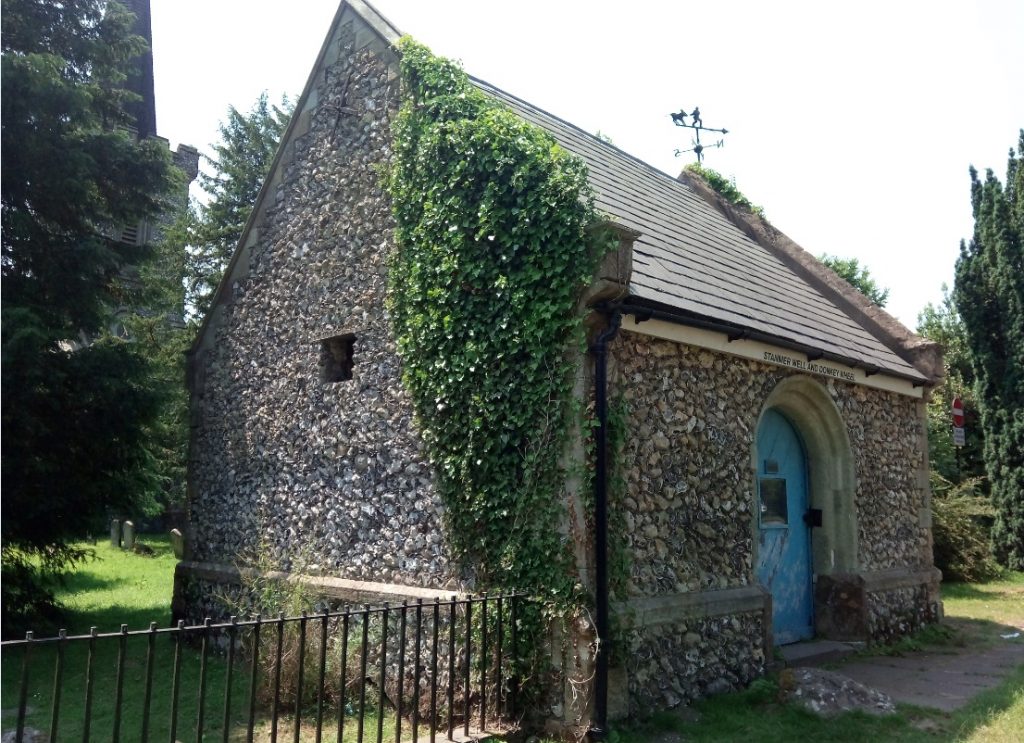 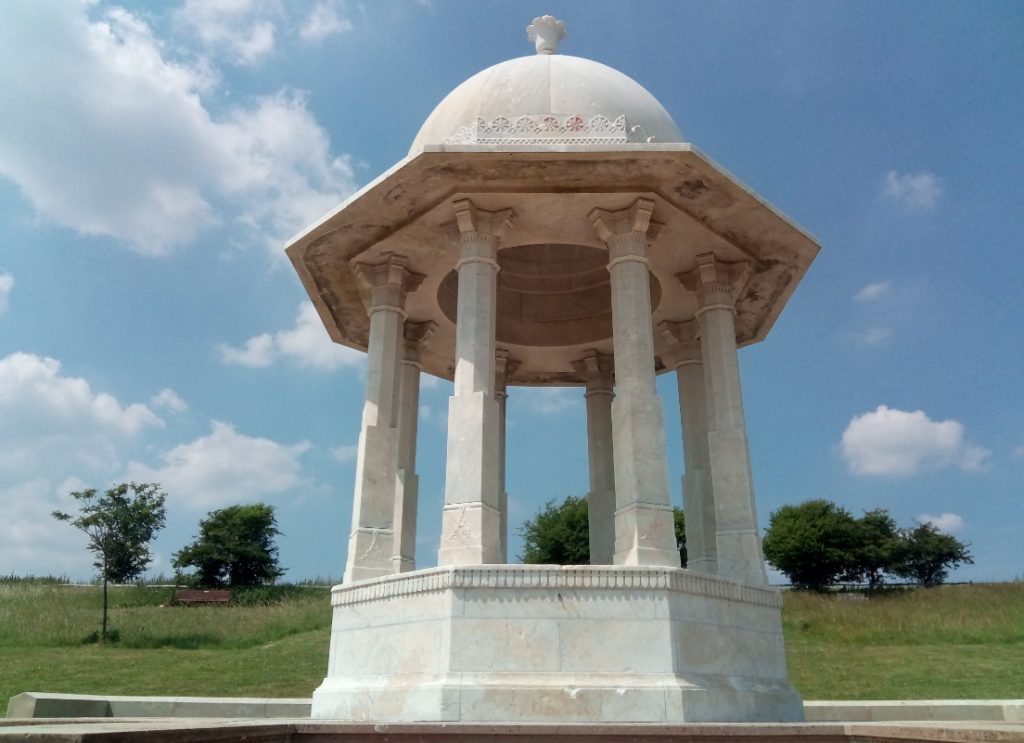 The isolated but peaceful Grade II listed Chattri was constructed on a windswept position 500ft above Brighton & Hove on the South Downs and is only accessible from a path off of a bridleway.

It was unveiled almost one-hundred years ago in 1921 by the then HRH Prince of Wales and was jointly funded by the India Office and Brighton Borough Council.

It marks the exact spot where 53 (of the 1.5 million) brave Indian soldiers who fought for the British Empire during the First World War were cremated. Three large granite slabs lie over the crematory bases. Chattri is Hindi, Punjabi and Urdu for umbrella and thus explains the shape of the Indian style memorial and it also symbolises the protection offered to the memory of the dead. 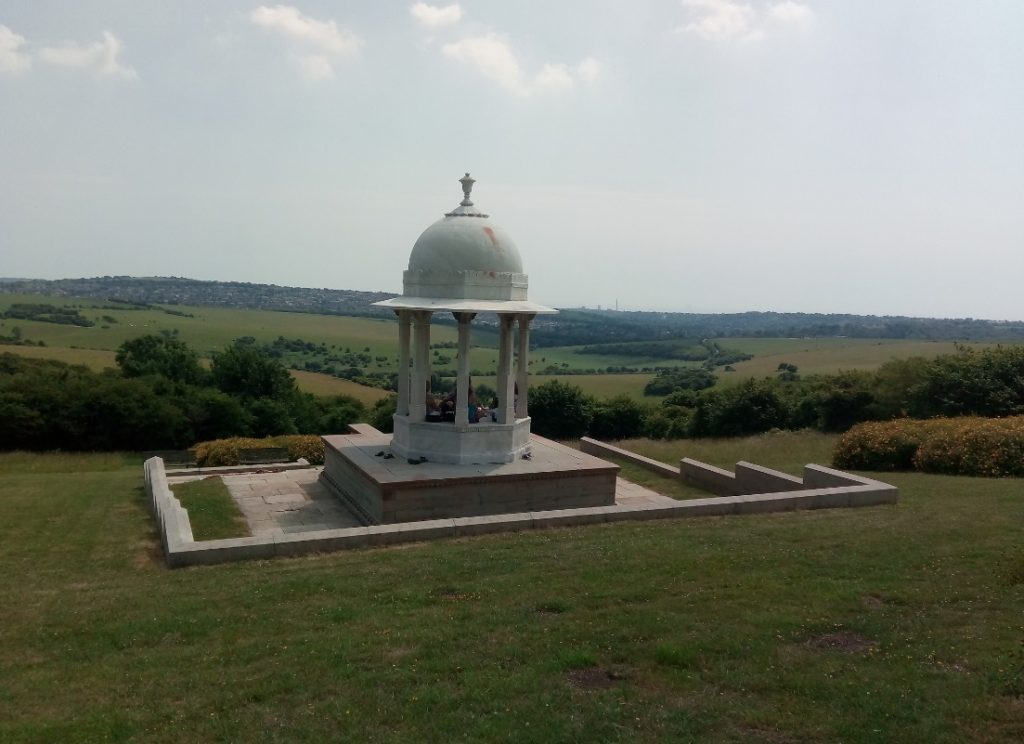 The Chattri’s view of Brighton

From 1951, the Patcham Branch of the Royal British Legion held a moving annual memorial service, which since 2000 was taken over by the Undivided Indian Ex-Services Association and a local Sikh teacher and it is believed to be the only ceremony of its kind in England. 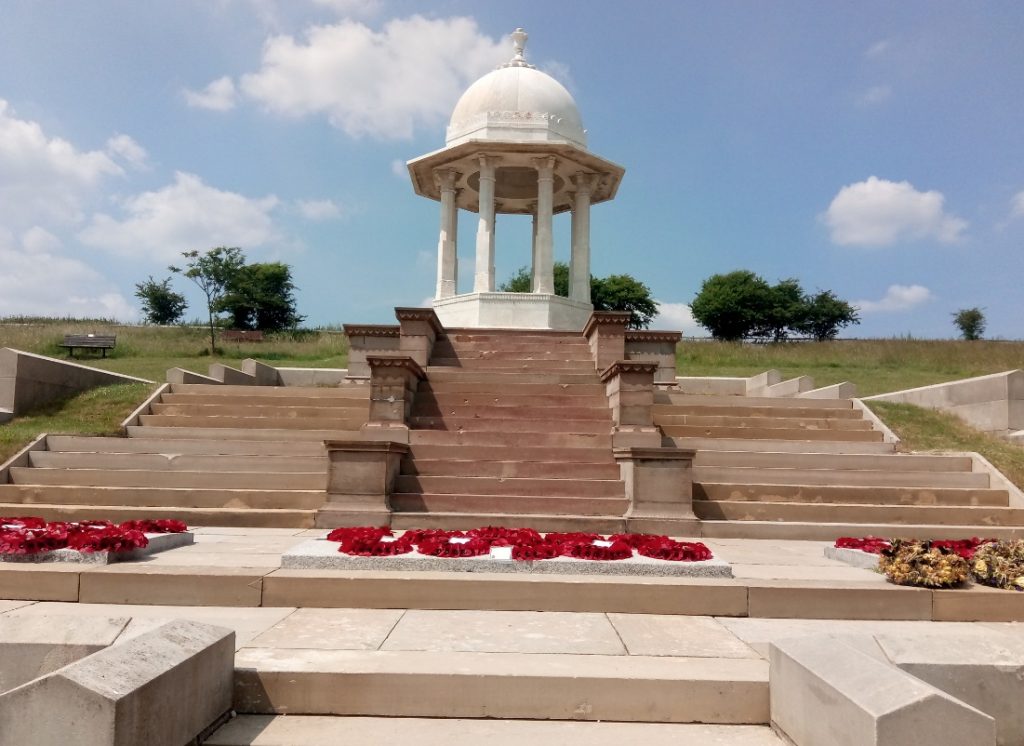 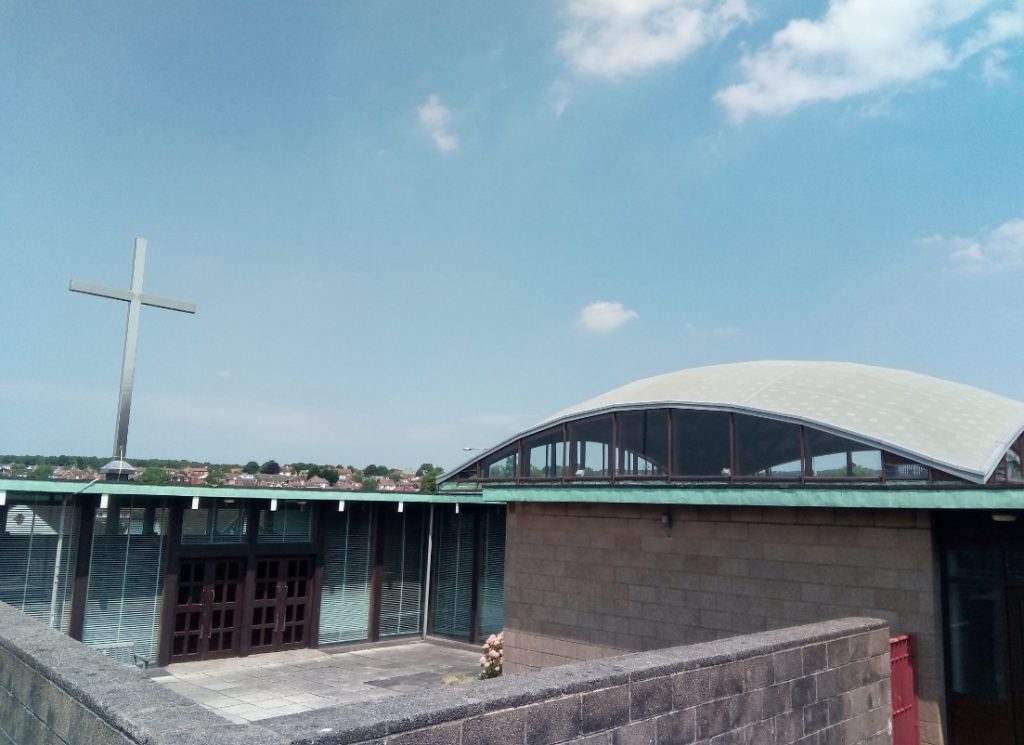 Located at 14 Church Close on the corner where Braybon Avenue meets Carden Avenue in Patcham, St. Thomas More’s Catholic Church is of a rather unusual modern design with a large cross adorning it (but no bell tower) and it serves the areas of Patcham, Westdene and Hollingbury for the Diocese of Arundel – Brighton.

The church was built in 1963 as a square concrete box design with an impressively large wooden geodesic dome, which was built by four men over a period of seven months and it creates the feeling of light and openness. The geodesic dome was invented by Buckminster Fuller, the American architect and its design is able to cover more space without internal supports than any other enclosure. The building is not currently listed, but I suspect in a few years time, people will see its beauty. 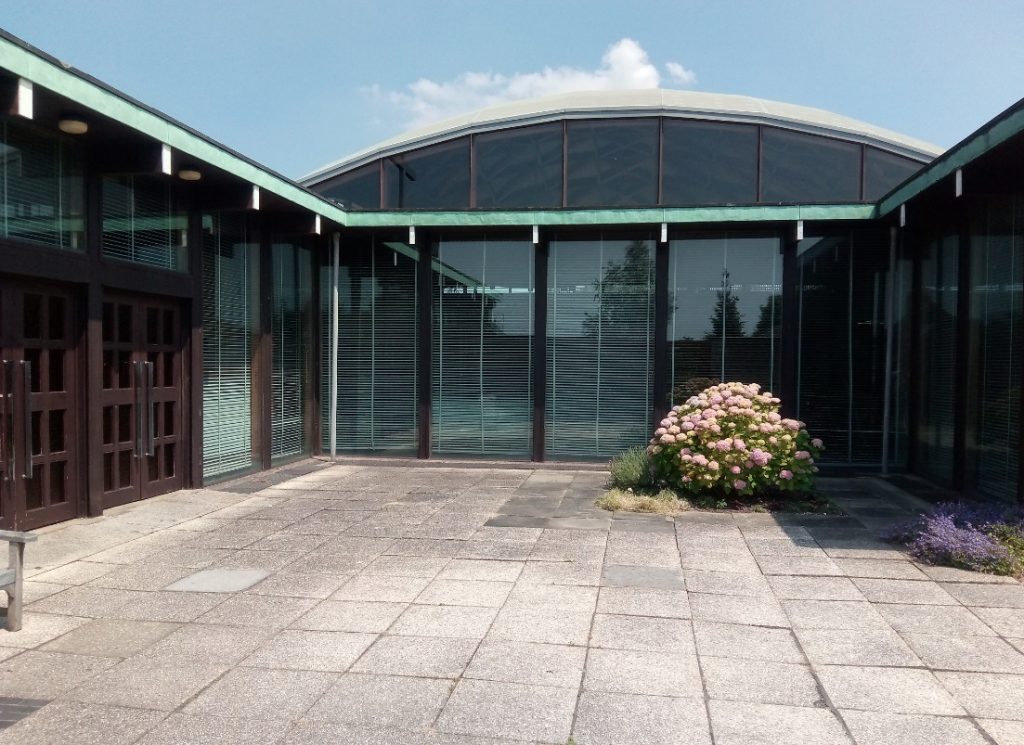 Lots of glass let’s the light pour in

The church is named after Sir Thomas More who was born in 1478 and died aged 57 in 1535. He was an eminent English lawyer, statesman, author, father of four and Chancellor of England and he did not support Henry VIII’s divorce from Catherine of Aragon in order to marry Anne Boleyn. He is venerated by Roman Catholics as Saint Thomas More and his resting place is the Church of St. Peter ad Vincula in London. 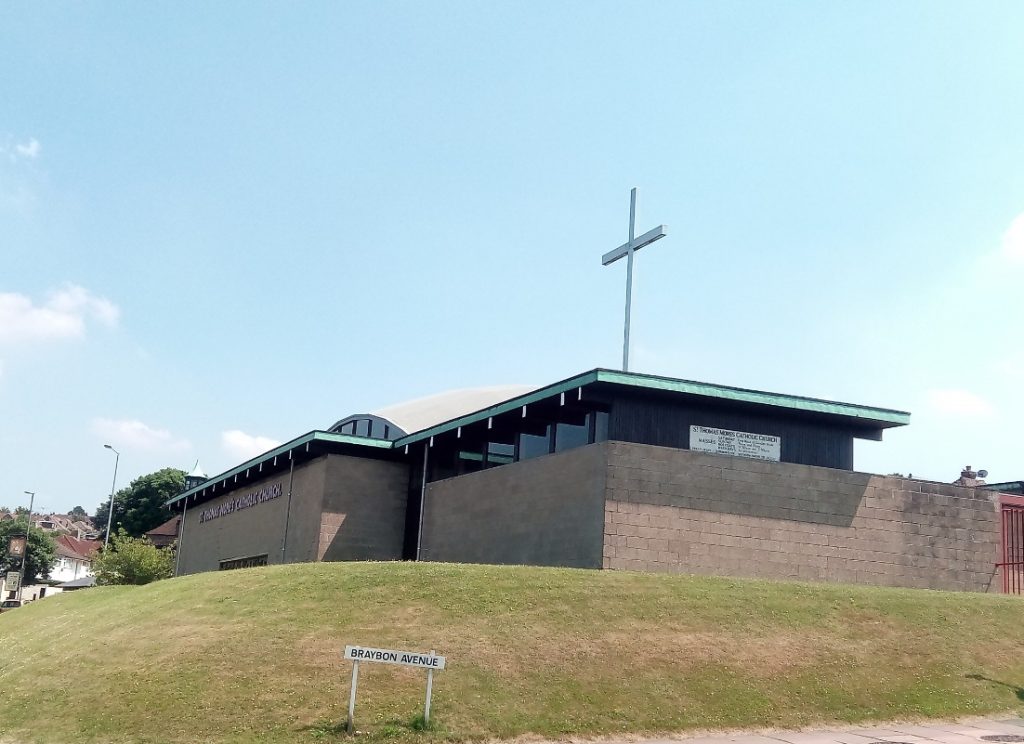 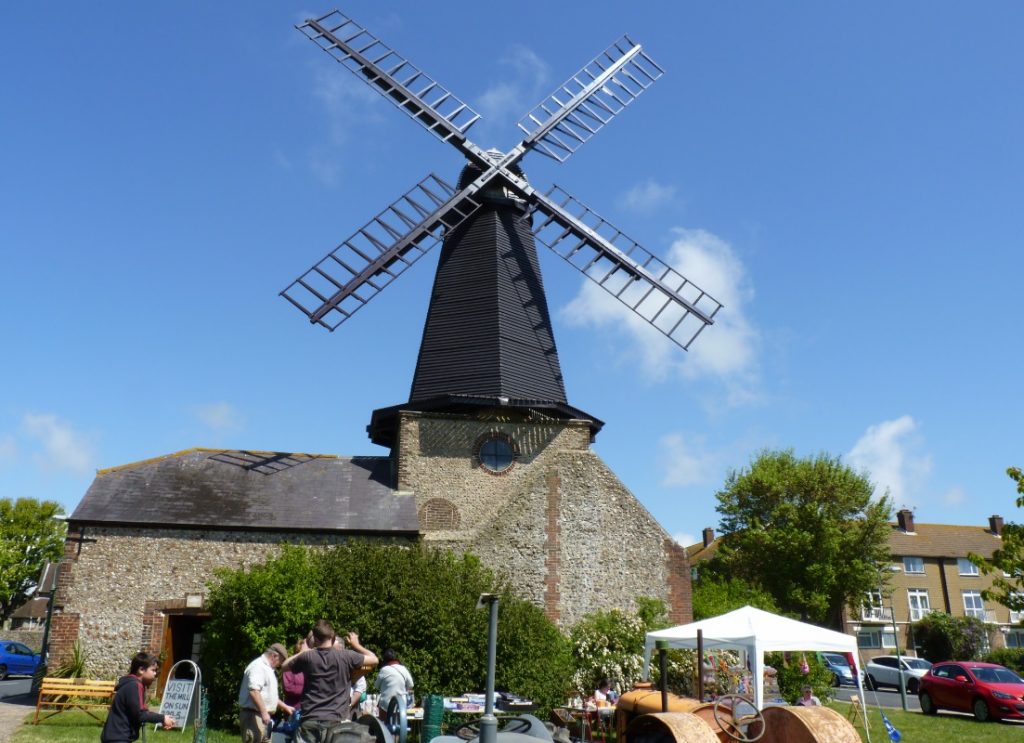 Located in Holmes Avenue, Hove is the unique Grade II* listed hexagonal three-storey smock mill known as West Blatchington Windmill. She (as all windmills are referred to as females, other than Jack Windmill in Clayton, but that’s apparently a she too – confusing eh?) was built in the early 1820’s and first appeared on a map in 1823 and was painted by John Constable on 5th November 1825.

She very unusually is sitting on a three-story brick base and she worked up until 1897 when two sails were damaged. Now any Sussex or Kent molinologist’s (oooh new word – Q. what does it mean? – A. one who studies mills) reading this will be tutting right now, as we here in Sussex don’t refer to the mills arms as sails, we call them sweeps! 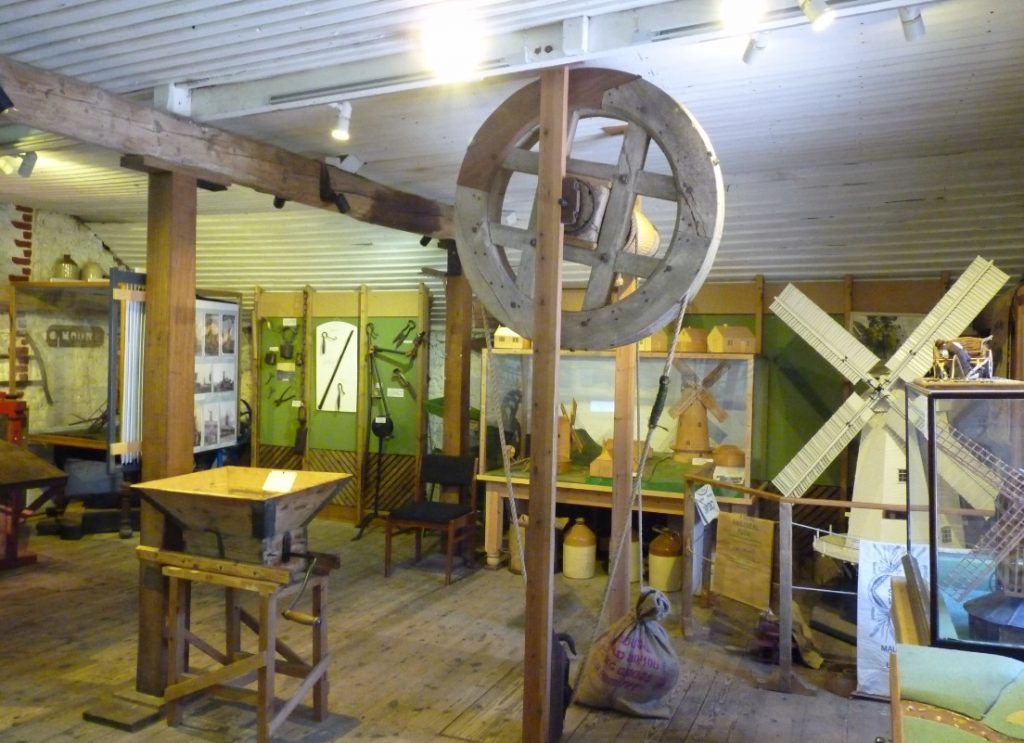 The interesting thing here is that the mill has machinery inside and a museum and so one can understand the workings as to how the (Windy) Miller got his flour. It’s type is known as a smock mill because in silhouette, it resembled the garment worm by millers and shepherds of the time. The mill is open to the public, thanks to Peter Hill and his team of volunteers. 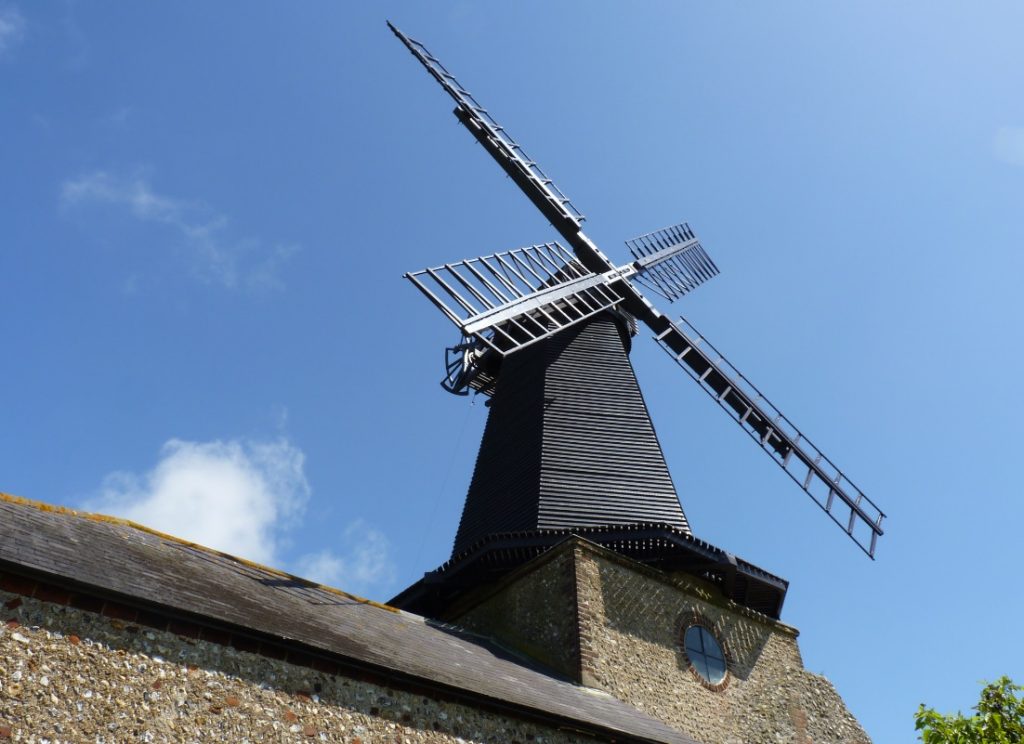