A man suspected of stealing a rucksack, laptop and headphones from Brighton University has been caught on camera.

The same man is later believed to have robbed a woman in Lewes Road, Brighton, punching her in the face. 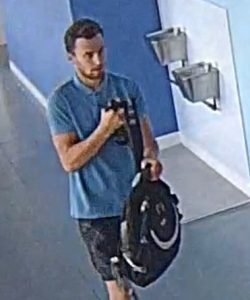 Sussex Police said: “Police are seeking to identify this man in connection with a theft and a robbery in Brighton.

“At about 7.30pm on Wednesday 24 May, the suspect entered a computer room at the University of Brighton, in Lewes Road, and stole an unattended rucksack which contained a laptop and headphones.

“Shortly afterwards, at about 7.45pm, a woman was walking along Lewes Road when she was approached by a man who demanded her phone.

“She handed it over before pushing him away, causing him to fall to the ground.

“The man is then reported to have got up and punched the victim in the face, at which point a passer-by intervened and managed to grab the rucksack which has been handed in to police.

“The suspect then ran off along Coombe Road.

“Police would like to speak to the man pictured in these images in connection with both incidents. 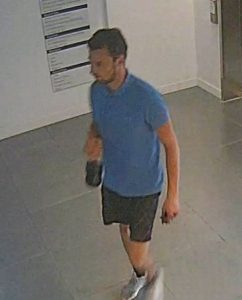 “Anyone who recognises him, or who saw what happened, is asked to report it online quoting serial 1453 of 24/05.