The sun shone on tens of thousands of people as they turned out for Brighton and Hove Pride.

Dozens of floats paraded along the seafront from Hove Lawns to the party in Preston Park, Brighton.

The event marked 50 years since the decriminalisation of homosexuality in England and Wales – it came later in Scotland and Northern Ireland.

The Princess of Wales’s Parachute Royal Regiment’s Parachute Display Team – known as the Tigers – started the parade with a freefall jump to deliver a rainbow flag.

The regiment, whose forerunners include the Royal Sussex Regiment, is celebrating its own anniversary this year, having been formed 25 years ago.

The streets of Brighton were packed with well-wishers as the parade went by, with the usual array of colourful floats, costumes and characters.

The party in the park included performances by the Pet Shop Boys, Years and Years, David Morales and Louisa Johnson.

Later the crowds continued the party in Kemp Town, spilling out on to the seafront, with others filling town centre pubs and bars. 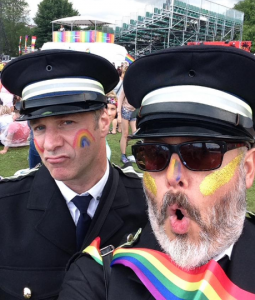 Here’s a video capturing the colour, sights and sounds of the parade and just a few of the many tweets.

Wonderful positivity & gratitude towards #Police at #Pride although the bloke between @DCCStephens & me didn’t look as happy as most pic.twitter.com/5AoBpaFxG0

#LGBTQ and Brighton?
What’s not to be proud of.
Happy Pride weekend, beautiful people.
Pearls, each & every one. #brightonpride2017