The first ever silent disco litter pick took place in Brighton yesterday, with a hundred people clearing more than a quarter of a tonne of rubbish from the beach.

The event was organised by the Pier 2 Pier Beach Clean and marked the start of the #StreetsAhead campaign by Cityclean and Hubbub UK. 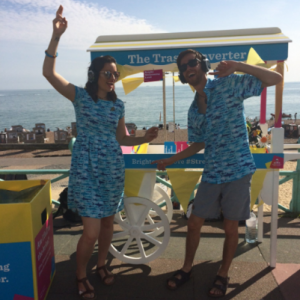 It aims to encourage residents, businesses and tourists to act together reduce the amount of litter in Brighton and Hove.

“It was recently predicted that by 2050 there could be more plastic in the ocean than fish and already, 35 per cent of fish off the coast of Brighton have plastic in their gut.

“The Pier 2 Pier Beach Clean wants to make Brighton and Hove part of the solution – not the problem.

“We’re so pleased that so many people got involved and were able to see just how much difference they can make in a short space of time – just by removing beach litter which could have easily made its way into the sea and harmed marine life.”

Among those taking part on Friday were local organisations such as the i360, Mooncup Ltd, Brighton Gin and Brighton University.

The Pier 2 Pier Beach Clean is a volunteer-run community group. It holds monthly beach clean events on Brighton Beach between the Palace Pier and the West Pier.

The group has now run four major clean ups and have collected more than 200kg of litter. 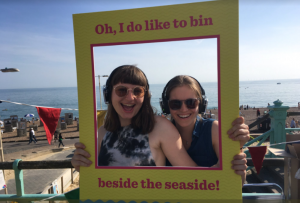 Find out more at https://www.facebook.com/groups/pier2pierbeachclean.

The Streets Ahead Campaign started yesterday (Friday 25 August) and the beach phase of the campaign will run this month and next.

The campaign is being run by Cityclean – part of Brighton and Hove City Council – and the environmental charity Hubbub UK.