Spanish people living and working in and around the Brighton and Hove area are planning a show of support for Catalans.

The demonstration follows the referendum on Catalan independence on Sunday (1 October) which was marked by violence as police tried to stop people from voting. 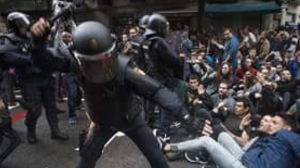 Members of a community group, Marea Granate, or Maroon Wave, said that they would be holding a demonstration of support outside Brighton Town Hall at 6pm today (Wednesday 4 October).

The group said: “We cannot stand silent in the face of the violence suffered recently in the Spanish state in Catalonia, sanctioned by the central government.

“We want to show our solidarity with Catalans who have seen their civil rights affected.

“At 6pm today a demo is planned for outside of Brighton Town Hall.

“This is a solidarity event in support of democratic rights to public assembly and active participation of citizens in decision-making and will also have speakers from local Spanish community group Marea Granate.

“We have requested the participation of the MPs from Brighton such as the Labour and the Green Party as we know they have recently made a statement against the repression in Catalonia.

“Marea Granate is a Spanish community organisation with bases in many countries around the world … to help to represent and support those from Spain living abroad.”

Almost 2,000 people from Spain or Spanish-speaking countries are believed to live in Brighton and Hove.