The new owners of St Aubyns School in Rottingdean say they are shocked by the blaze which destroyed a wooden hut and damaged the sport hall on Sunday. 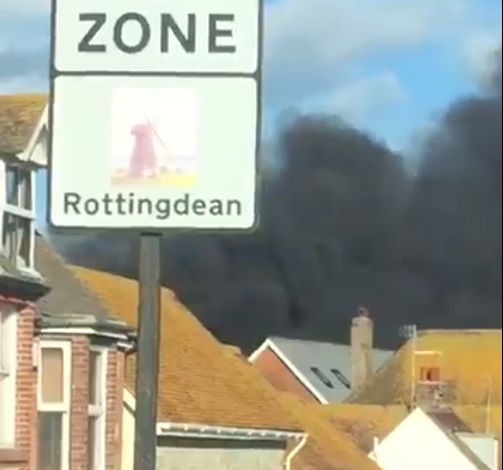 Police and fire are still investigating the cause of the blaze, which is thought to be suspicious – and owners Fairfax say that there have been frequent trespassing and security breaches at the site despite their best efforts.

The school closed in 2013, and its previous owners failed to get planning permission to develop the site, including demolishing some of the buildings.

Fairfax made two fresh applications in August, which are still under consideration.

“Fairfax took ownership of the St Aubyns School site in January 2017. Since this time there have been numerous instances of security breaches and vandalism despite Fairfax boarding up the site and committing staff to regularly site visits.

“Yesterday’s arson attack has come as a tremendous shock to everyone at Fairfax. We are extremely relieved to learn that no one was injured and are fully assisting the police and authorities with their investigations.

“A team has already been deployed to the site to guarantee that the remaining buildings are safe and do not present a hazard to the local community.

“The fire was contained to the gymnasium complex only and none of the listed buildings on the site were damaged.”

A police spokesman said: “Police and East Sussex Fire and Rescue Service responded to multiple calls of a fire at the former St Aubyns preparatory school in High Street, Rottingdean, at around 3.20pm on Sunday (22 October).

“Numerous police and fire units attended to deal with a blaze in derelict buildings at the rear of the school and resultant traffic congestion in the area. Motorists were asked to avoid the A259 coast road and diversions were put in place at the junction of Steyning Road and Newlands Road.

“A disused wooden hut was destroyed and partial damage was caused to a derelict sports hall. There were no injuries or any threat to neighbouring properties.

“Police are continuing to work with fire investigators to establish the cause of the fire, which is currently being treated as suspicious.

“Anyone with information is asked to contact police online or call 101 quoting serial 788 of 22/10.”