Sixty homes have been approved for the site of the old Sackville Hotel on Hove seafront.

The scheme, drawn up by the Hyde housing association and HGP Architects, includes 10 “affordable” homes – five for rent and five for shared ownership.

The scheme won the unanimous backing of the Brighton and Hove City Council Planning Committee this afternoon (Wednesday 8 November).

The committee had previously deferred dealing with the planning application after asking for more information.

Members wanted to understand more about the scheme’s viability – to work out how many affordable homes should be included.

Councillor Joe Miller, who proposed the deferral at a meeting in September, said that it had been worth putting off a decision as the application now included more affordable homes than previously.

And Councillor Clare Moonan praised the compromises made by the developer for the site in Kingsway, Hove.

The proposed building will be up to eight storeys high, with parking for 27 cars and 80 bikes on land covering just over a third of an acre.

Hyde will be expected to make a financial contribution of almost £300,000 to the council, including £60,000 towards local schools.

Councillor Lynda Hyde – no relation – praised the scheme including its green credentials.

Although Councillor Alan Robins said: “I knew the old Sackville Hotel building very well. It was a really beautiful building.

“It seems to me that this is a bit boring. I know it fills a hole and provides some homes.

“Rather than having something iconic and beautiful, we’ve come up with something a little bland.” 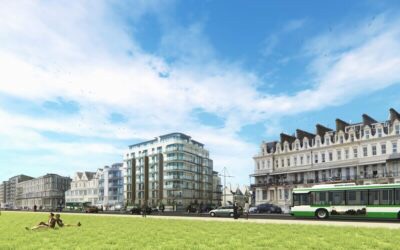 The old Sackville Hotel, on the corner of Sackville Gardens, collapsed in April 2006 during building work.

The 45-bed hotel, built just over a hundred years earlier, was deemed to be structurally unsafe and demolished shortly afterwards.

The new design won praise from some, including Councillor Penny Gilbey, who said that it was “so much better” than previous schemes for the site.

In the past a scheme for a row of townhouses won approval on appeal and a plan to build a 17-storey tower was withdrawn before being formally discussed.

Councillor Julie Cattell, who chairs the committee, said: “I think the design’s great. Let’s hope work will begin on this site as soon as possible.”

Hyde development director Tom Shaw said: “We are pleased that the development of 189 Kingsway has been approved and welcome the support for the quality of the design which will enhance and improve the Sackville Gardens Conservation Area of Hove and help to regenerate Hove seafront.”