Mr Johnson was given a tour of the lab where teaching and research is under way using robotics, advanced computing and other rapidly developing technologies.

The opening of the Future Technologies Labs comes on the day the government publishes its Industrial Strategy White Paper.

The white paper – or policy document – is the government’s blueprint for national success at a time of unprecedented technological change in the global workplace.

Mr Johnson – the youngest brother of Foreign Secretary Boris Johnson – met Sussex vice-chancellor Adam Tickell at the Falmer campus and was shown some of the lab’s work by teaching and research staff and students.

Sussex University said: “The state-of-the-art facilities, along with a raft of new degrees in robotics, autonomous vehicles and 5G, announced today, will enable Sussex students to become the workforce of the future, with the skills to boost productivity in critical industries for the UK, such as aerospace, pharmaceuticals, manufacturing, food and agriculture.”

Mr Johnson described Sussex as “a great research-intensive university”, vital to sustaining the jobs of the future which would be key to Britain’s economic growth.

He said that the government’s industrial strategy had a strong focus on future technologies, adding: “We want institutions such as Sussex to be at the forefront.”

He also praised the university’s emphasis in attracting female students and other under-represented groups, such as those from minority ethnic or disadvantaged backgrounds.

Mr Tickell said: “This cements the University of Sussex’s place as a regional economic powerhouse and highlights the vital role we can play in delivering the government’s industrial strategy by equipping the next generation with the skills and capabilities that businesses need to enhance productivity.

“Our new masters’ degrees launched today all include industrial placements and we are committed to matching the needs of industry with the education we offer. 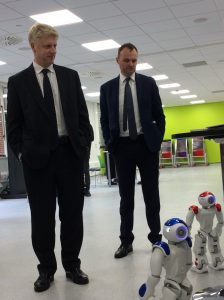 “Technologies such as drones, robotics, AI (artificial intelligence) and 5G are transforming virtually every aspect of modern life, from how we survey large structures to new methods of remote and minimally invasive surgery.

“This is an exciting and timely investment in upskilling our young generation, giving them practical expertise in the technologies that are critical now and in the future.”

The university said: “The investment in the university’s School of Engineering and Informatics has been jointly funded by the university and the government, via the Higher Education Funding Council for England (HEFCE).

“Robotics has been identified by the government as one of the UK’s ‘eight great technologies’ and a critical piece in plugging the nation’s engineering skills gap.

“According to Engineering UK, the UK’s annual shortfall of high-skilled workers has increased by 25 per cent to 69,000.”

Mr Tickell said: “The fast-changing world of work and society at large means we all need to invest for the future.

“This new £11 million facility does just that by investing in our students who will be the industrial designers, coders and innovators of tomorrow.

“The demand for expertise in these areas, and how to exploit their potential, far outstrips supply, offering our students an exciting and rewarding future in a wide range of established and rapidly developing industries.

“This is all about ensuring that we have the very best facilities to make sure our students can fully benefit from that expertise.”