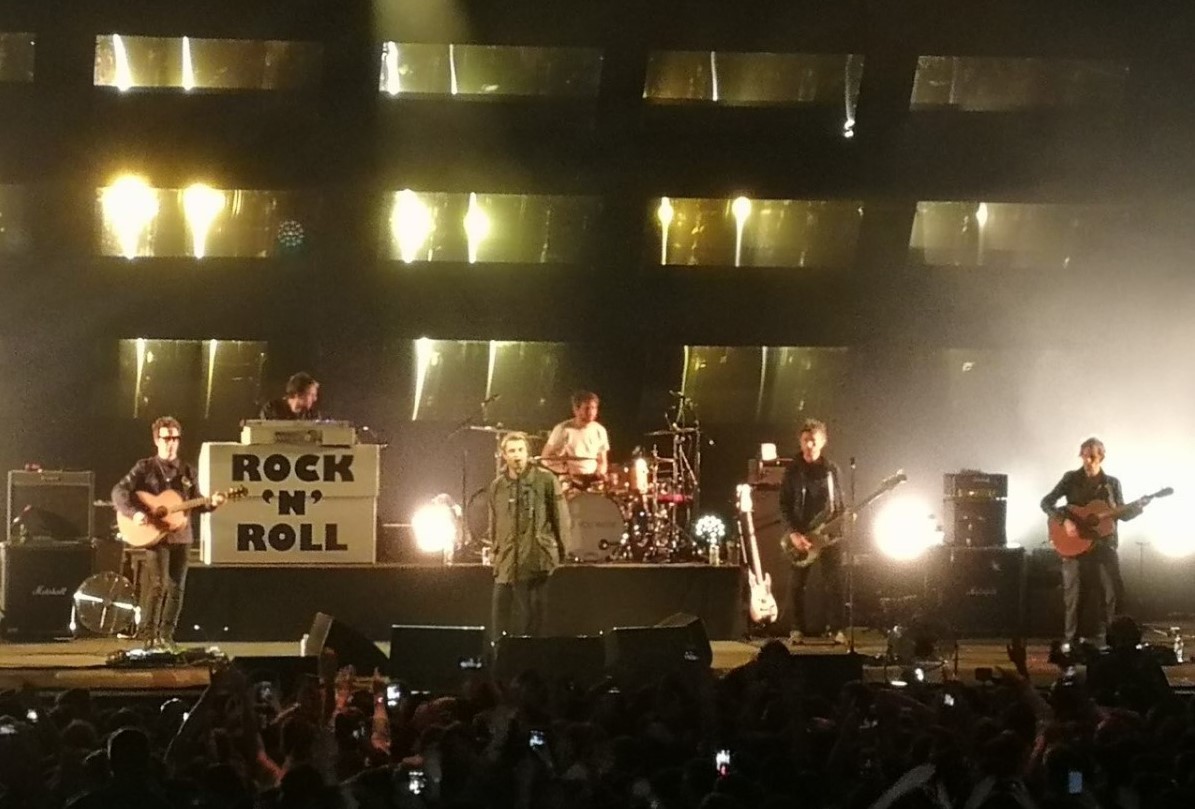 Former Oasis frontman, Liam Gallagher trounced into Brighton last night, as part of his first solo 9-date UK tour in support of his debut solo album ‘As You Were’, which was released on 6th October and flew straight in at No.1 in the Official Album Charts.

Truth be known, it actually sold more units than the rest of the Top 10 albums combined on it’s week of release! No doubt this was fuelled by the shear number of purchasing options that his punters could choose from: digital (standard and deluxe), CD (standard and deluxe) and vinyl (standard 12″ and limited edition coloured 12″ formats). A special box-set is also available which compiles a coloured 12″ vinyl of the album, an exclusive 7″ format of ‘For What It’s Worth’, a print designed by Klaus Voorman (the artist behind The Beatles ‘Revolver’ album cover) and additional collectors items.

This signalled that 45-year-old Liam is back at the height of his powers, as he wrote or co-wrote all the album tracks and his return has been nothing short of spectacular, from emotive scenes in Manchester to huge sing-a-longs at Glastonbury, while three new tracks ‘Wall of Glass’, ‘Chinatown’ and ‘ For What It’s Worth’ are already establishing themselves as towering anthems, delivered with Liam’s once-in-a-lifetime vocal.

Liam’s well documented bust-ups with ‘our kid’ (brother Noel Gallagher) and others down the years has seen everyone’s favourite gobshite Manc hit the headlines for all the wrong reasons, however tonight in Brighton, this surely wasn’t the case! 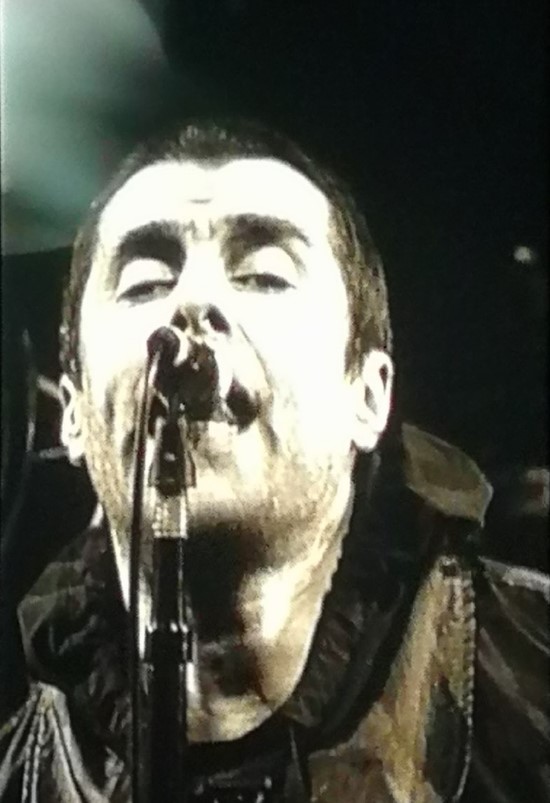 There was a large buzz around tonight’s event, with many ticket tout’s outside the venue offering their services and after the gig, the street outside was awash with many unofficial t-shirts and posters laid out on the ground. I wonder what Liam would have done if he came out and saw them? Obviously, the clothing wouldn’t be the same quality as Pretty Green!

For those of you that are unaware, Pretty Green (named after the opening song on The Jam’s 1980 ‘Sound Affects’ album) was founded in 2009 by Liam, who in that year moved on from Oasis to form Beady Eye. The ethos of Pretty Green is to reflect British street cultures influence on fashion here and worldwide, thus offering classic clothing with a modern twist. We have a branch in Dukes Lane in Brighton, not that far from tonight’s gig.

This evening was kicked off by the sound volume being cranked up when broadcasting ‘Cracking Up’ by The Jesus & Mary Chain, just prior to an intro tape recounting someone’s achievements of ‘first this’ and ‘first that’, which was quite entertaining if not rude in parts. Then on strolled three guys, Jack (vocals/guitar), Wayne (bass/vocals) and Rob (drums/vocals), known as Trampoline.

Behind these lads was draped Y Ddraig Goch (the Welch dragon flag) and judging by the title of their recent debut album ‘From Swansea to Hornsea’, I would correctly surmise that they are Welsh. Things started off rather well for them as a few rocky numbers were let rip, then the Pete Doherty self-destruct button was well and truly hit, as the singer Jack decided to give us a poem called ‘Ketamine’, which killed the atmosphere – there were boo’s. They followed up with a slow tune and then with an over-indulgent rock number called I think ‘Storm Heaven’. Wayne and Rob exited the stage to leave Jack to perform a solo of Oasis’s ‘Songbird’, which obviously won quite a number of the crowd back. I wonder how their recent set at Brighton’s Hope & Ruin went down, hopefully better?

Next up was Chelmsford’s finest 21-year-old Jordan Cardy aka Ratboy. Jordan and his three mates (Harry, Liam and Noah) brought a breath of fresh air to tonight’s proceedings with their blend of rappy-indie-rock. 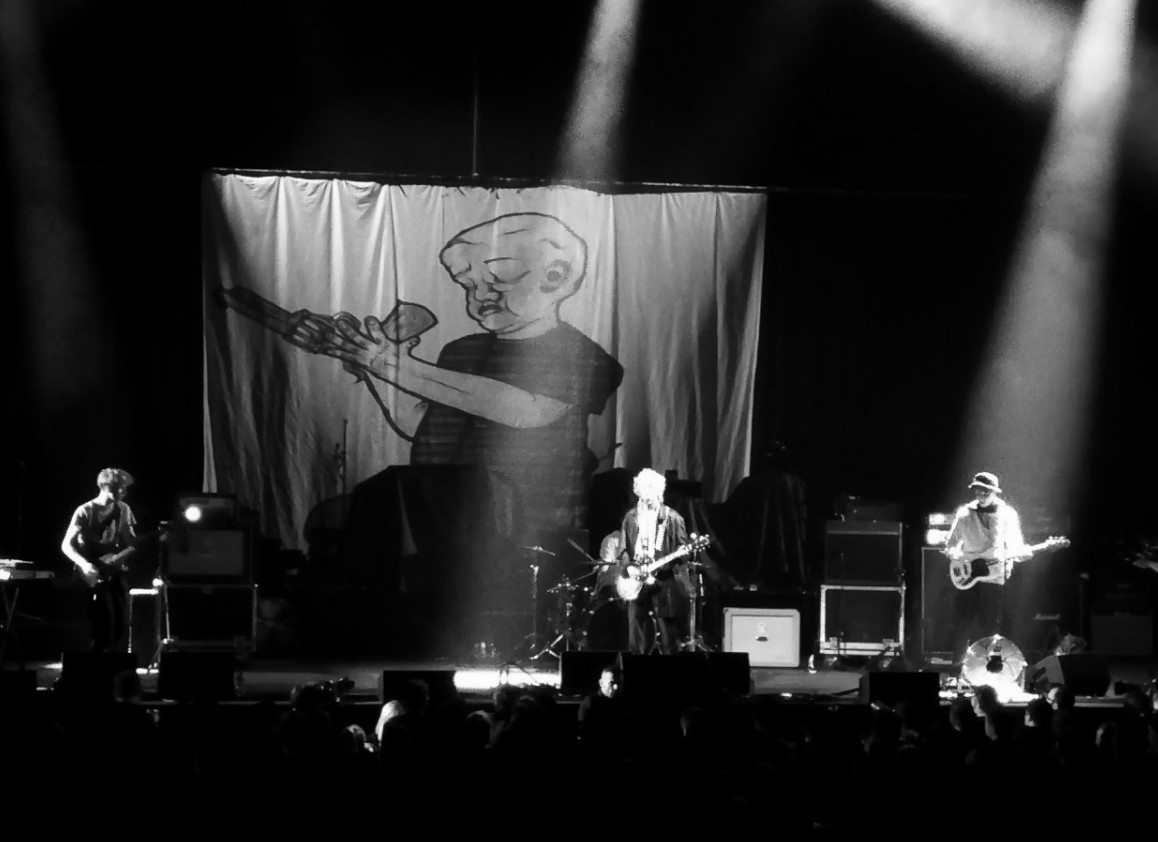 I first became aware of Ratboy last year when he won NME’s ‘Best New Artist’ award and this year he has launched his debut album ‘Scum’ and now a support slot on Liam Gallagher’s tour which will do him no harm at all. His sound is very ‘now’ indeed and I am pretty sure more and more people will climb on board.

This evening, the lads performed an all-too-short set that included ‘Knock Knock’, debut single ‘Sign On’ and current single ‘Revolution’. They had tape snippets in between tracks which was something quite unusual for a rock gig, but it worked – nice one! 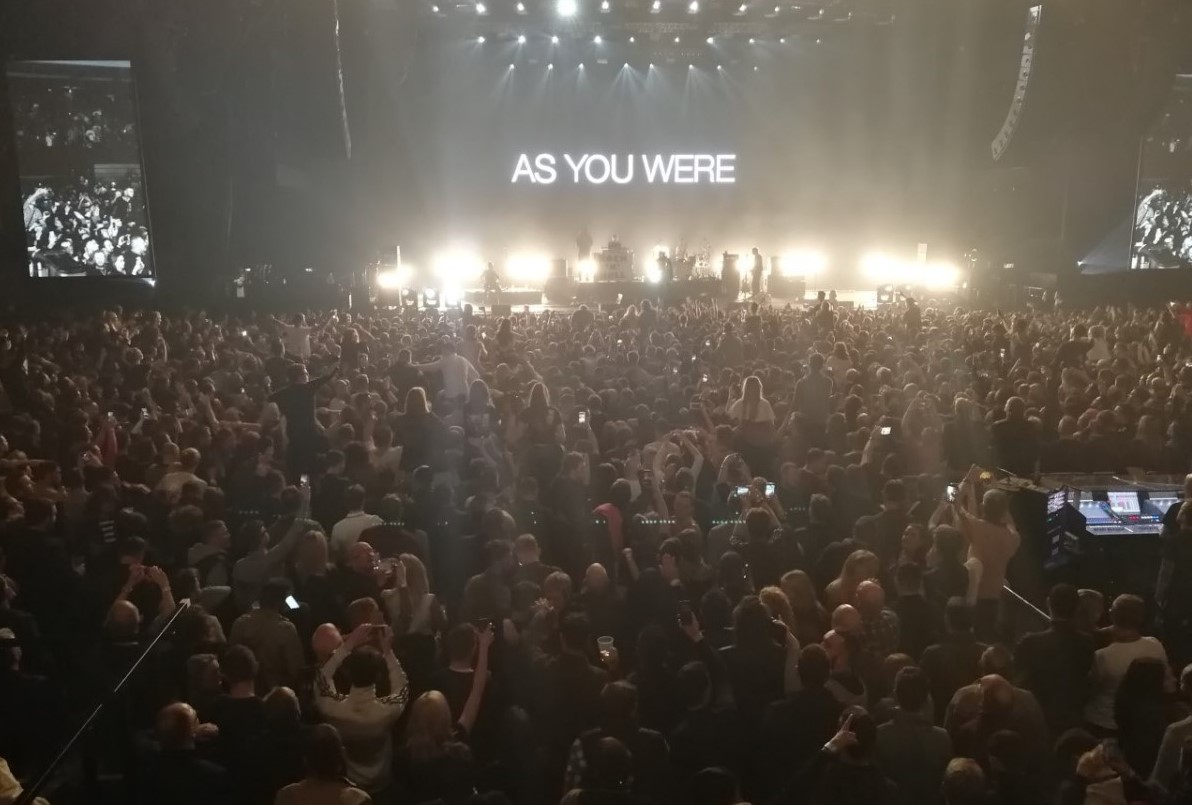 The crowd were by now getting nicely warmed up for Liam’s appearance but to push the euphoria even higher, the sound guys blasted out a sequence of winning tunes: ‘She Cracked’ by The Modern Lovers, ‘Kick Out The Jams’ by MC5 (and sampled by The KLF), ‘Bodies’ by The Sex Pistols, ‘New Rose’ by The Damned, ‘Town Called Malice’ by The Jam (who incidentally I saw perform their final concert here at the Brighton Centre just over 35 years ago on 11th December 1982) and finally ‘I am Resurrection’ by The Stone Roses – game on!

Cue intro tape of Oasis track ‘Fu**in’ In The Bushes’, the waft of weed (not from me!) and copious amounts of (unwanted) beer shampoo and we were away! 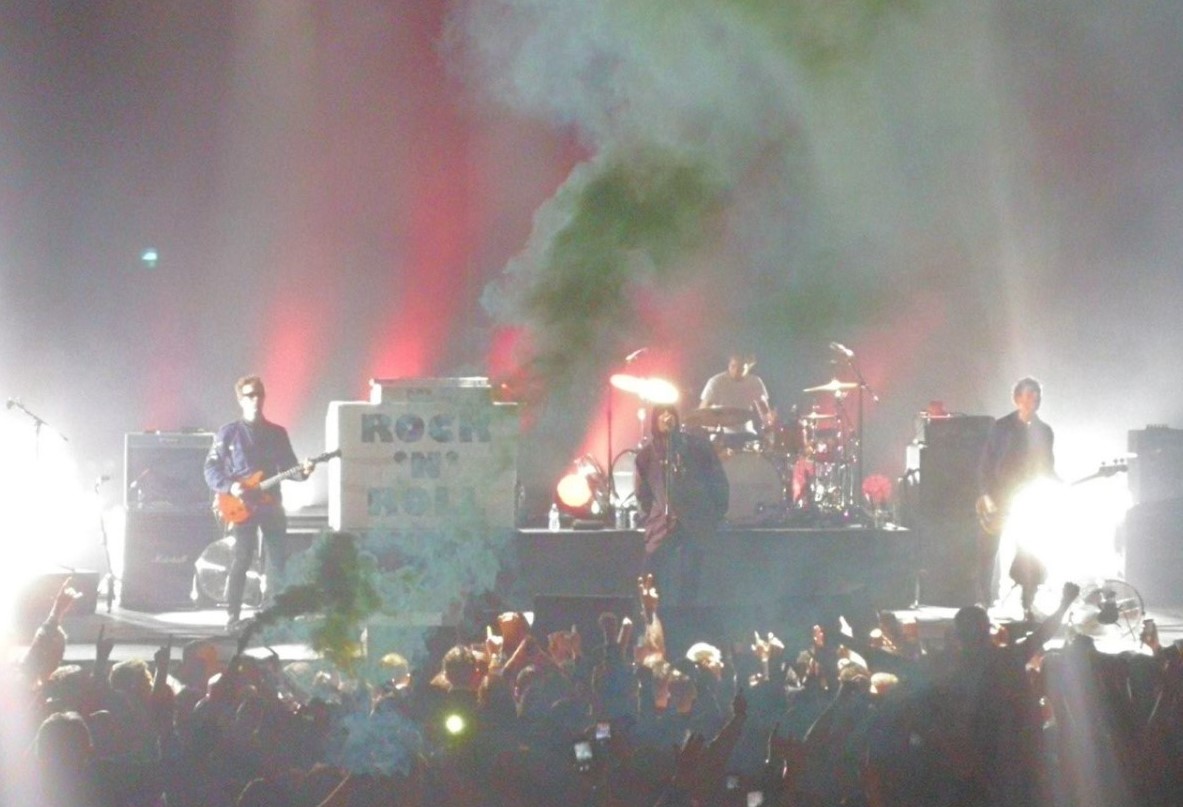 Right then, who’s the geezer that’s sneaked in a flare?

Liam and his band sure know how to put on a great rock event. They had two giant video screens either side of the stage with really decent lighting and they played a tight set. Half of which were Oasis numbers, including ‘Rock ‘n’ Roll Star’, ‘Morning Glory’, ‘Some Might Say’, ‘Supersonic’ and ‘Be Here Now’.

William John Paul Liam Gallagher seemed to be enjoying himself tonight and didn’t even taunt the Brighton faithful too much, not even really blagging too much about Manchester City’s 2-0 win over BHA back in August. Probably because we held on until the 70th minute.

He strutted around the stage with his usual geezer-swagger and then half way through put up his hoodie, which I think did make him look a bit like Dee Dee Ramone (RIP) as his hair was the same shape as the hoodie. 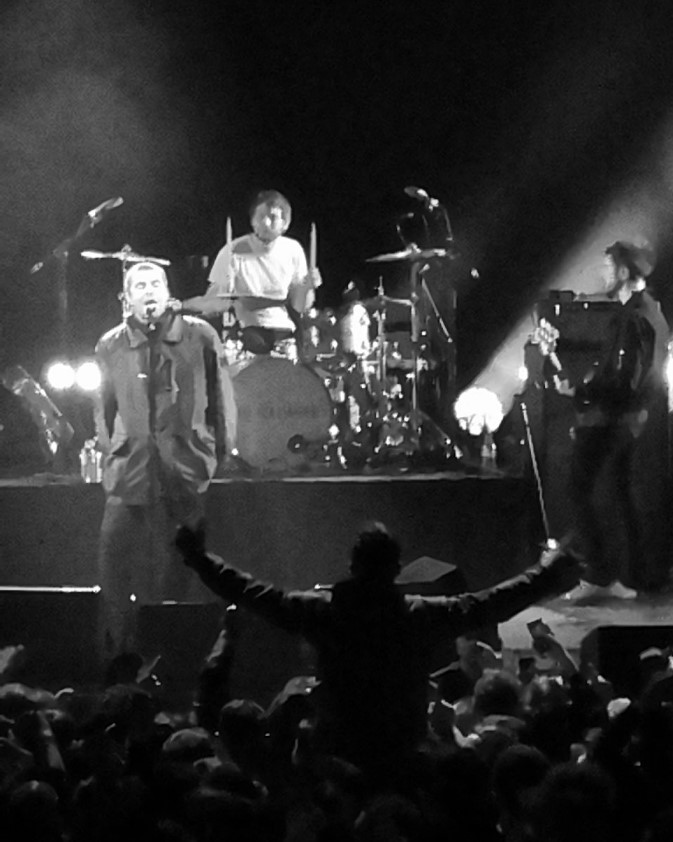 We were treated to an impressive 20 song set, eleven of which were Oasis hits (including a superb rendition of ‘Wonderwall’) and we luckily had two encores. Honestly half of the crowd had left the hall when the guys returned to the stage to perform a cover of ‘Natural Mystic’ (by Bob Marley, who I witnessed performing at the Brighton Centre back in 1980) and so the faithful came rushing back in for one final send off. That was it, a resounding success. I wonder how brother Noel will fair next year at the same venue? 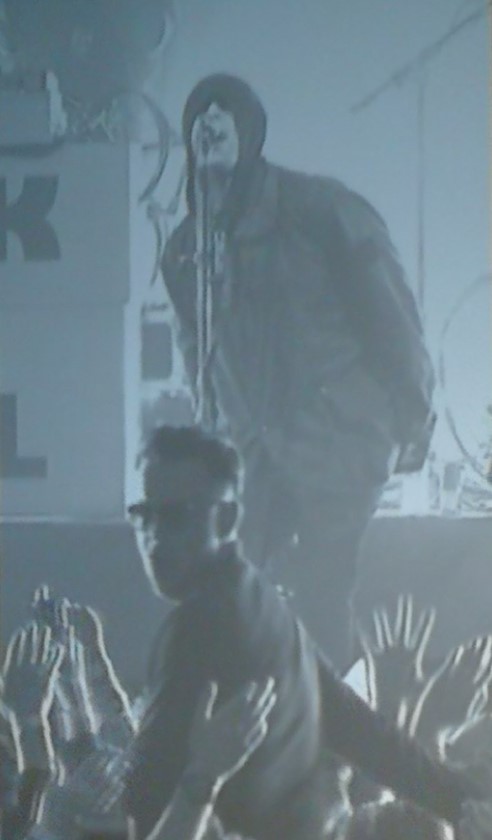 This looks like a it has the energy of a tv advert for sunglasses! 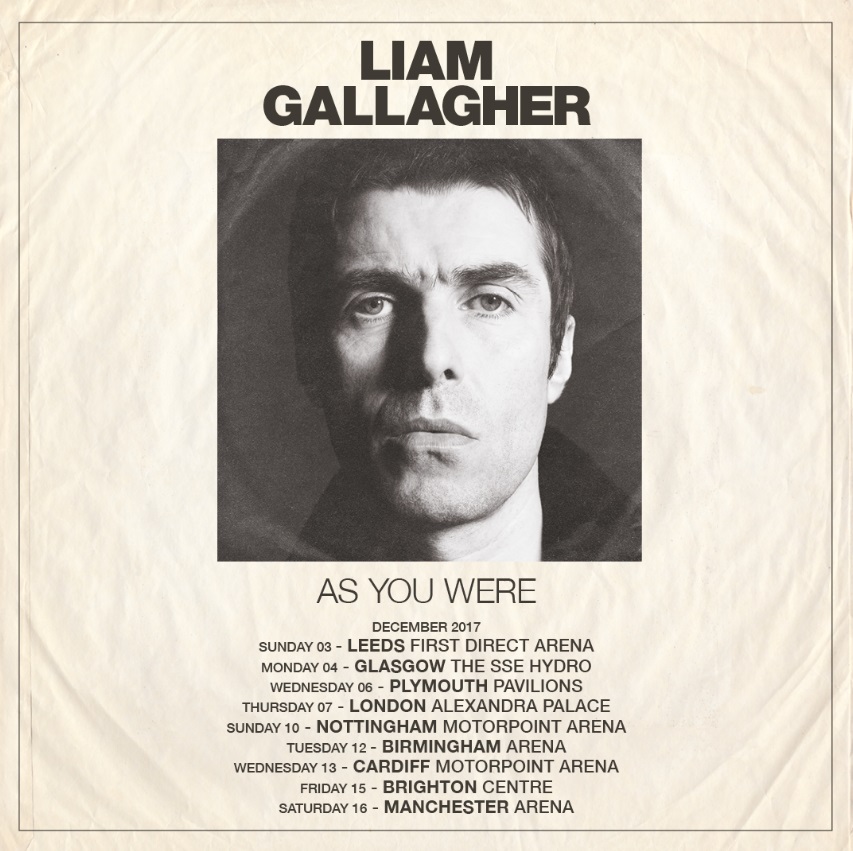