Smoking blamed for 1,100 deaths a year in Brighton and Hove

Smoking has been blamed for more than 1,100 deaths a year in Brighton and Hove, according to NHS bosses.

And more than 1,860 people a year were admitted to hospital as a result of smoking-related illnesses.

The estimates were published by Public Health England to coincide with its new TV advertising campaign encouraging smokers to quit.

A significant number of those will need treatment at the Royal Sussex County Hospital in Brighton before they die although many will be treated at other hospitals around the county.

The number of smoking-related hospital admissions each year was estimated to be more than 5,400 in East Sussex and more than 7,300 in West Sussex.

“Each year it kills 36,532 people in the south east and 64,684 people are admitted to hospital  with a smoking-related illness, which works out to be more than seven an hour.

“In Sussex and Surrey, the mortality figures are 12,599 and the number of people admitted to hospital with smoking-related illnesses 22,523, which works out to one person every 24 minutes.

“Our new TV ad shows how every cigarette sends a flood of poisonous chemicals through the bloodstream in seconds.

“We are urging every smoker in the south east to take advantage of the free Smokefree support and quit for good this new year.”

GP and medical journalist Dawn Harper said: “I see the damaging effects of smoking in my surgery almost every day.

“Tar from cigarettes causes damage to major organs, the bones and increases your risk of a range of cancers and diseases.”

Dr Harper added: “The good news is that no matter how long you’ve smoked, quitting can reduce your chances of developing cancer, heart and lung disease and other serious smoking-related illnesses.

“Some of the benefits are almost immediate, with improved energy and breathing within a matter of days.

“I know how difficult it is to stop but the important thing is to commit to trying again, no matter how many times you might have tried and failed in the past – it’s never too late.” 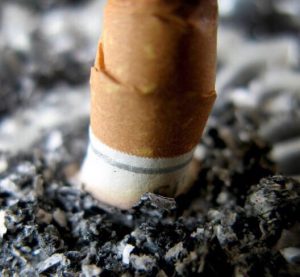 After seeing lab tests showing how quickly poisonous chemicals from smoking were absorbed by the body, the TV presenter, entrepreneur and lifelong smoker Hilary Devey said: “I’ve smoked at least 20 a day for over 40 years.

“Like many, I’ve been hooked on cigarettes and ignoring the damage.

“Even though I know the harm I’m doing, I’ve found it extremely difficult to quit for good. Even a stroke three years ago only led me to stop temporarily.

“Seeing the high levels of poisonous chemicals in my blood from these tests really hit home how dangerous continuing to smoke is – and for that reason, I’m done!

“I’m absolutely determined to try again this new year and I hope other smokers across the country will join me making full use of all the free help available at Smokefree.

“This time next year we could be celebrating one year smoke-free and feeling the benefits.”