A survey of family doctors in Brighton and Hove has flagged up concerns about social care and community health services.

The findings were presented this afternoon (Tuesday 6 March) to Brighton and Hove City Council’s Health and Wellbeing Board at Hove Town Hall.

Questions were asked about funding cuts to social care although it was suggested some criticisms being levelled at the council were misplaced. They should have been directed at the Brighton and Hove Clinical Commissioning Group (CCG) which is run by the doctors themselves.

Retired GP (general practitioner) Chris Tredgold said: “GPs in Brighton and Hove have told us that the lack of social care may result in unnecessary hospital admissions and delayed discharges.

“Demand for social care is rising but the budget to meet it is falling.

“We sent a survey to 124 GPs in Brighton and Hove – 47 responded. All but one had experienced patients having problems because of difficulties with social care provision.

“Over half had experienced these weekly, another third monthly. All but three had experienced patients being admitted to hospital unnecessarily because of limited social care resources – a fifth weekly, a half monthly.

“A large majority had experienced patients whose discharge had been delayed. For a quarter this had occurred weekly.”

“Their feeling of frustration is palpable – and, too, their feeling of shame that the system of which they feel a part should have failed their patients.

“The pressures on the NHS and social care are now so great that some GPs have said to us ‘at what point should care professionals declare the system is no longer safe or sustainable and resign?’

“The patients are suffering and it is probably the most vulnerable who are suffering the most, – the ones with the least voice to speak up.

“Some have been discharged without adequate social care. Some have been unable to get care at home and have reluctantly been admitted to hospital. 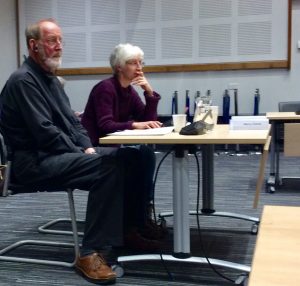 “In the worst instance there was no care for a retired teacher with cancer who wanted to die at home.

“He had to be admitted (to hospital). He died within 24 hours having spent most of that time on a trolley.

The council’s executive director of health and adult social care Rob Persey defended the local authority. He said: “The situation is challenging.”

Extra money was going into the budget for adult social care, he said, although there had previously been reductions. The reductions had been smaller locally than in some parts of the country.

And the wait from assessment to having a care package in place was no longer than 13 days, Mr Persey said.

He cited research by Healthwatch Brighton and Hove suggesting that GPs locally had many more patients than the national average, adding: “It’s a very serious situation.” 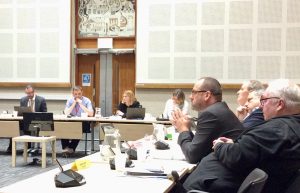 Members of the Health and Wellbeing Board listen to GPs’ concerns

Labour councillor Karen Barford, the lead member for adult social care, said: “I was horrified when I saw the survey.

“Some of this might be down to perceptions. Since 2015 the budget (for adult social care) in Brighton and Hove has risen.

“I was quite surprised by the information about there being delays around social care. Nobody has to wait longer than 13 days and that’s only in non-urgent cases.

“We don’t underestimate the scale of the task ahead.”

She urged the government to come up with a system for sustainable funding, with adult social care accounting for a bigger share of council spending than any other department.

Councillor Barford also said that there was a lot of confusion and that some of the delays were nothing to do with the council’s adult social care staff but were related to community health services.

Dr Supple added that this shouldn’t be a problem for patients to have to worry about, intimating that health and care professionals had to sort things out.

Daniel Yates, the Labour councillor who chairs the Health and Wellbeing Board, said: “CCGs were set up so that GPs would have power to commission the services they felt were needed.

“It’s ironic that GPs are coming to us complaining about services that they’re responsible for commissioning.

“That’s no criticism. It’s down to the complexity of the system.”

He said that there was less bed blocking – or fewer “delayed transfers of care” from hospitals – attributable to the council than in many other areas.

David Liley, who chairs Healthwatch Brighton and Hove, said that his organisation had been carrying out research in local hospitals.

The aim of the research was to try to understand why people who didn’t need to be in hospital had chosen to go there rather than somewhere more appropriate.