A lookout was looking at social media on his mobile phone just before a collision which left three fishermen dead, an official report said today (Thursday 8 March). 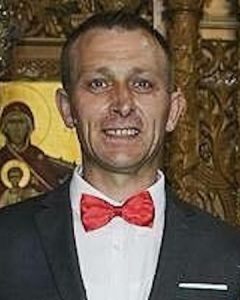 The only survivor was Elvis Cojocariu, a fellow Romanian from London, who was pulled from the sea suffering from hypothermia after five hours in the water. He was spotted clinging to a buoy.

A report by the Marine Accident Investigation Branch said that the lone lookout in the scallop dredging vessel Vertrouwen “allowed himself to become distracted by using his mobile phone and working on a laptop computer”.

He was filling out a log entry on his computer which should have been completed before setting off from Shoreham Harbour. 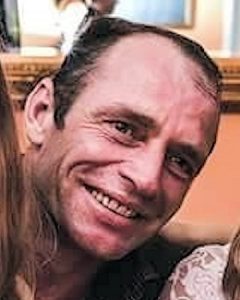 The report also found that the fishermen were not properly equipped or prepared. For example, they had no distress flares or fog horn. The report said: “The three sea anglers drowned because they were not wearing lifejackets or buoyancy aids and were unable to raise an alarm.”

They went out with rods and lines to fish for mackerel in Mitch Ilie’s boat James 2 a few hours before the collision which happened just before 12.30am on Sunday 6 August last summer.

The Vertrouwen, owned by MacDuff Shellfish, didn’t actually hit the James 2 in the collision.

But the wash from the dredger swamped the smaller boat and it sank in less than two minutes. 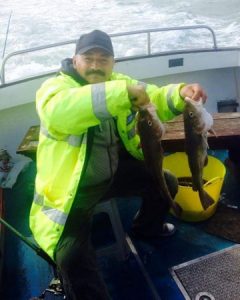 Neither vessel was damaged by the impact but James 2 was swamped by Vertrouwen’s wash and sank.

Three of the men on board the motor cruiser drowned. A fourth was rescued from the water five hours later by a passing fishing vessel.

Vertrouwen had just left port and was on passage to Grimsby. James 2 was drifting with the wind and tide while the four men on board were rod fishing for mackerel.

The collision occurred because Vertrouwen’s lone watchkeeper did not see James 2 either visually or by radar and by the time the sea anglers realised they were in danger of being run down, they were unable to get out of the way.

The three sea anglers drowned because they were not wearing lifejackets or buoyancy aids and were unable to raise an alarm. 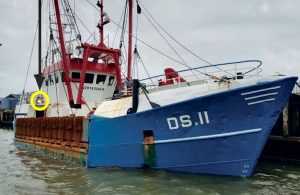 The investigation found that neither vessel was keeping a proper lookout.

Vertrouwen’s watchkeeper allowed himself to become distracted by using his mobile phone and working on a laptop computer. The sea anglers on board James 2 were focused on fishing.

That night, visibility was very good and the sea was calm but James 2 might not have been visible from Vertrouwen’s wheelhouse because the motor cruiser was not showing a masthead light and sternlight or an all-round white light.

James 2 was almost stationary but was presenting a strong echo on the port authority’s radar and Vertrouwen had two newly installed radars that were operating on the six-mile range scale.

Vertrouwen was displaying the correct navigation lights for a vessel of its size but, in addition, its forward-facing dredge deck floodlights on both sides of the vessel were switched on.

Also, just prior to the collision, and for a while afterwards, the skipper was engaged with his mobile phone using social media.

At the time of the collision he was using a laptop facing aft to compose his e-log departure report. 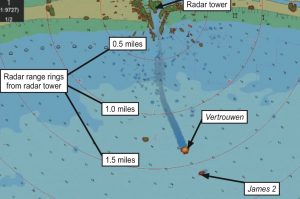 The investigation report concluded that

• Neither vessel was maintaining a proper lookout. The lone watchkeeper on board Vertrouwen was distracted immediately prior to and during the collision. The sea anglers were focused on enjoying a social evening night fishing and did not keep a lookout.

• James 2 was presenting a good radar echo and should have been identifable on Vertrouwen’s radar screens. However, Vertrouwen’s skipper was not systematically checking the radar picture. Further, James 2 would have presented a small, stationary close by target that might have been hard to detect on a six-mile range scale.

• The brightness of Vertrouwen’s illuminated deck floodlights would have impaired the lone watchkeeper’s night vision and, when observed from ahead, would have made its navigation lights less distinguishable to other vessels.

• The sea anglers’ chances of survival would have been significantly improved had they been able to raise the alarm and been wearing lifejackets or buoyancy aids.

• an effective lookout was not being kept on either vessel

• none of the sea anglers on James 2 were wearing lifejackets

1. Maintaining a safe navigational watch is critical to the avoidance of accidents at sea. In its Marine Guidance Note (MGN) 313(F), the Maritime and Coastguard Agency (MCA) emphasized, to fishing vessel operators, the importance of keeping a proper lookout and warned of the dangers associated with lone watchkeeping and distractions. In particular, distractions such as mobile phones, computers and televisions in the wheelhouse should not be allowed to interfere with the keeping of a proper and effective lookout.

2. Radars are an effective aid to navigation that can supplement a visual lookout. However, to be effective, the selection of appropriate range scale and the use of target plotting are critical.

3. At night, deck lights will create backscatter from deck equipment and housings that can impair a lookout’s night vision. They can also mask navigation lights and so confuse observers from other vessels. Deck working lights should only be shown when absolutely necessary, and should be switched off at all other times.

4. The completion of the mandatory e-log departure report should be undertaken prior to the vessel sailing. Working on computers in the wheelhouse can be a distraction from keeping a proper lookout and should be discouraged on board.