Brighton and Hove mayor thanks supporters after busy year

After a year in office outgoing Brighton and Hove mayor, Labour councillor Mo Marsh, has averaged more than one engagement a day.

During her mayoral year, which finishes on Thursday 17 May, Councillor Marsh carried out more than 387 engagements.

Of these 52 – or one a week – were events or receptions in the Mayor’s Parlour, 25 involved faith groups or communities,  11 involved sport or sporting activities,  53 were traditional or heritage events,  45 were meetings,  29 involved the arts or creative communities, 40 were charity, fundraising or volunteer events,  20 involved aspects of health, age or well-being,  32 involved young people, 17 supported the economy and  63 were in support of neighbourhoods, inclusion, communities and equalities.

During the past year more than £45,000 has been raised for the mayor’s five charities, the Martlets Hospice, Albion in the Community, RISE, the Sussex Heart Charity and the Clock Tower Sanctuary.

Proceeds from the Brighton to Brussels bike ride have so far contributed more than £24,000 of the total raised to date. 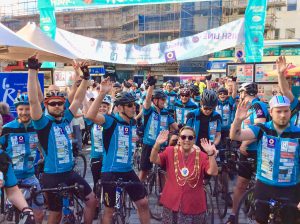 Conservative councillor Dee Simson, the current deputy mayor, is expected to take over as mayor from Thursday.

Green councillor Alex Phillips is expected to take on the role of deputy mayor.

The mayor thanked Father Robert Norbury for his work as chaplain
and his support throughout the year.

She thanked Councillor Simson for deputising at many events and for her support and flexibility.

And she thanked Robert Brown – a leading figure in the community in her Mouslecoomb and Bevendean ward – for his support as her mayoral consort.