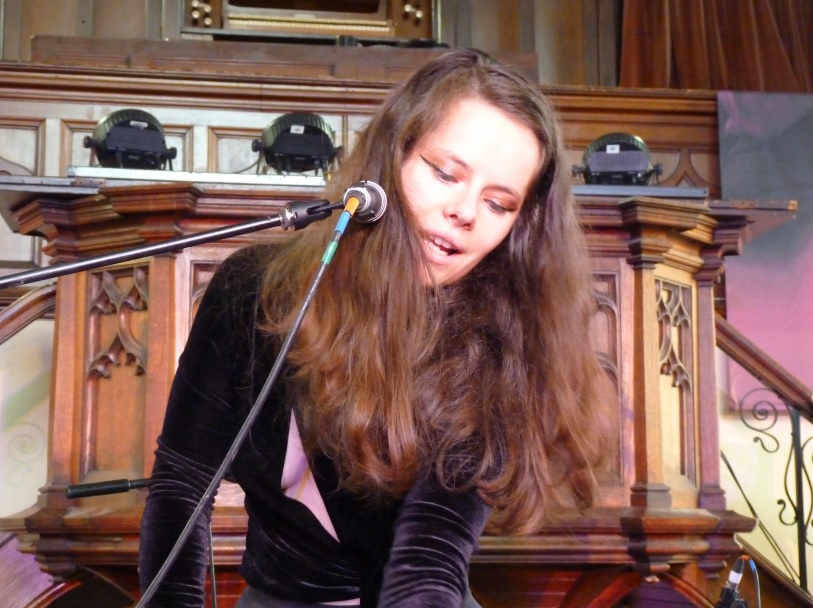 Here we go, Day 2 of Europe’s biggest new music event – The Great Escape. The Brighton & Hove Music Team brings you a further 10 concert reports from this fab second days proceedings, so sit back and enjoy… 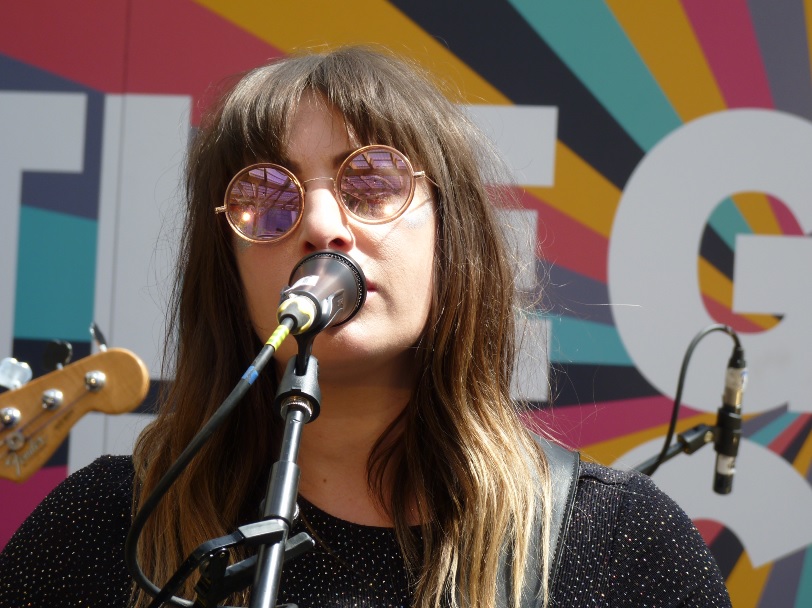 We were lucky to have seen Cosmic Strip perform only a month earlier at the Green Door Store, located under Brighton’s main railway station and the TGE line-up has changed slightly, as they were a five piece instead of the previous 6 piece, as the synth guy wasn’t there and the dude on bass has morphed into a lady. Glad to report that Alice’s terrific looking pink guitar is still in attendance.

I had only recently discovered them, when I came across their excellent synthy-shoegaze epic ‘Echo Chamber’ tune, which bodes well for the future as it sits nicely in amongst the songs performed in the sunshine at Jubilee Square this afternoon. NL 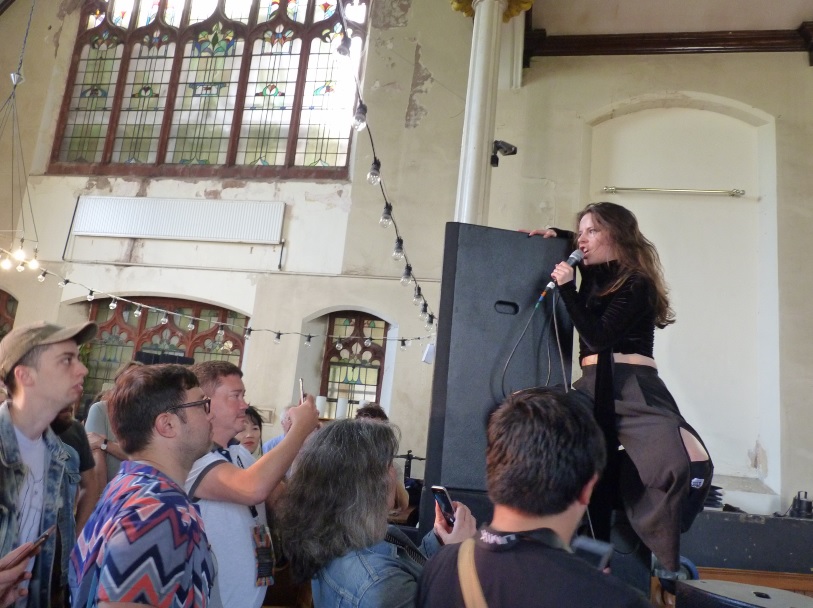 Now here’s a funny one, everyone at The Great Escape will refer to this act as Happy Meals, however, on the day of the event they changed their name to Free Love. A much better name if not ideal in timing. So now they are currently Free Love (FKA Happy Meals) – got it? OK? Right move on…..

Free Love are the Glasgow-based duo of Suzanne Rodden and Lewis Cook and they specialise in minimalist Italo/Euro disco. Not only that, but they’ve hit on the terrific notion of Suzanne singing in French and voilá their electronic beats and smooth uplifting synth grooves take on a new sexy fantasy for the listeners – miles more interesting than actually just teaching French.

I had actually checked out these guys music online beforehand (as I do all of the acts that I am able to) and watched a 32 minute live studio session that they recorded on YouTube – twice! I loved it, those sounds were borderline hypnotic and should sit very nicely within our ecclesiastical One Church surroundings me thinks.

Then surprise of all surprises, Suzanne was possessed by demons or something as she headed out from behind her electronic box of tricks and climbed the speakers and (let’s face it) erotically posed at the front of stage and then briskly made her way through in and out of the unsuspecting crowd, who all really enjoyed it, but were cautious not to stand on her mic lead, which was long enough for Suzanne to make it right across the interior of the church building. Meanwhile Lewis is still holding the fort as though nothing is going on and we were still dancing!

Well what can one really say about all these shenanigans, other than, we are going to see this again, and we did. However, this WAS the best performance that I witnessed at this year’s TGE. NL 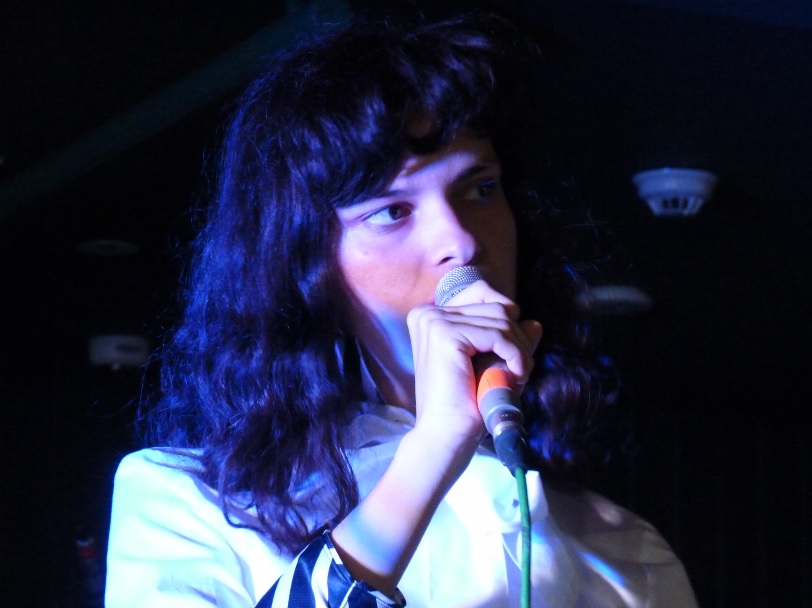 Audiobooks were one of the surprise package of the whole TGE for us. We weren’t expecting their look or sound to be honest. If you can imagine The Flying Lizards meets Bjork meets Let’s Eat Grandma, then you get the idea that this duo are quirky. We love quirky! We love Audiobooks! We love their random comical lyrics and jaunty synth rhythms. Their track ‘Swansea’ (which hopefully will see the light of day by the end of the year) will bring a laugh/smile to anyone’s face. They have just released their 4 track ‘Gothenburg EP’ and ‘Pebbles’ from said EP is a remarkable piece of music and deserves to be picked up and used in countless motion pictures! NL 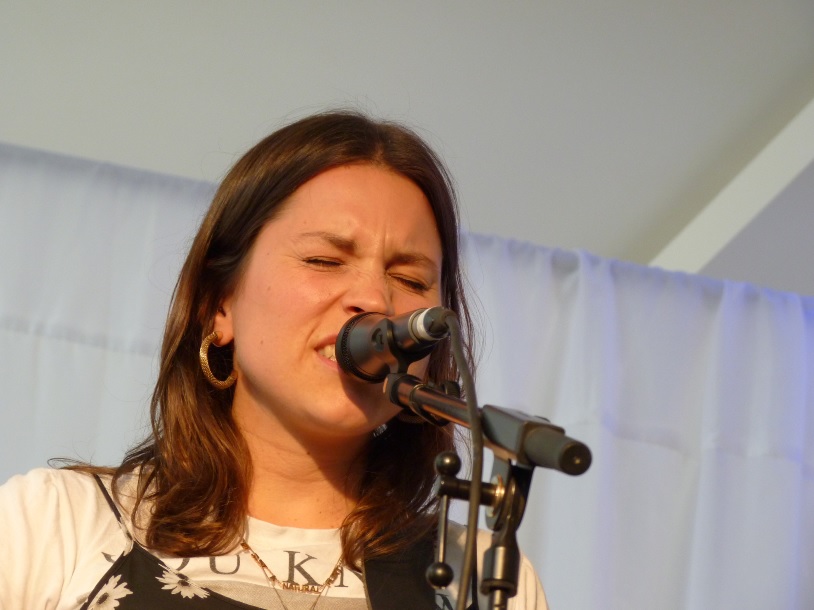 Another new Great Escape venue, the Harbour Hotel on Brighton seafront hosted a delightful performance from London-based Norwegian singer EERA. Usually accompanied by a full band (which we witnessed on a previous Great Escape at Patterns), she had been added to the artistes roster at short notice, so it was just her and her acoustic guitar delivering a stripped-back set.

This was definitely a downshift of tempo on the day for us, but EERA’s mesmerising and gentle vocal were an absolute delight. Think PJ Harvey, Beth Gibbons et al and you’d probably be in the right ballpark. There is a lot of introspection in her songs, but they are beautifully delivered with a candid and charming honesty. Stand out track for me was the stunning ‘Reflection of Youth’.

A September European tour is planned and if you like the aforementioned musical influences, I suggest getting a tour date in your diary. MF 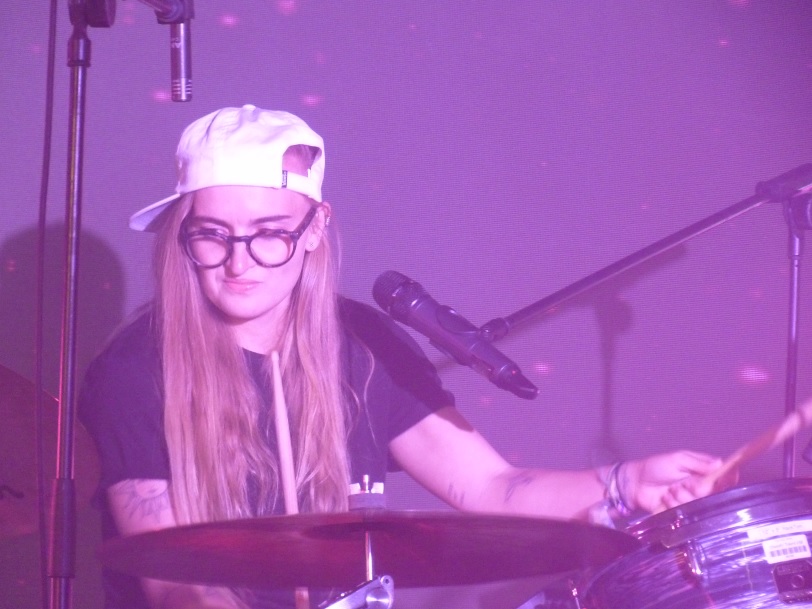 G Flip (Georgia Flipo) has come a very long way in such a short space of time as tonight’s packed Beach Club performance is only her fifteenth ever gig.

The Melbourne singer, producer and multi-instrumentalist fell in love with the drums as a kid and travelled the US as a touring drummer in her early 20’s. Never one to sit still, Georgia then locked herself in her bedroom studio for all of 2017 and taught herself how to write and produce her own songs.

While incubating her new project, Georgia created a round LCD screen for the front of her hand-made kick drum, known as ‘Je Ro Mo’ named as a tribute to her late drum teacher Jenny Rose Morrish. The drum cleverly displays any imagery, video or content that Georgia can dream up and this was put to good use during our gig.

The standout track on the night for me was her modern chart-friendly catchy shimmering pop tune ‘Right Here’. Synths and drums a great combination for me. NL 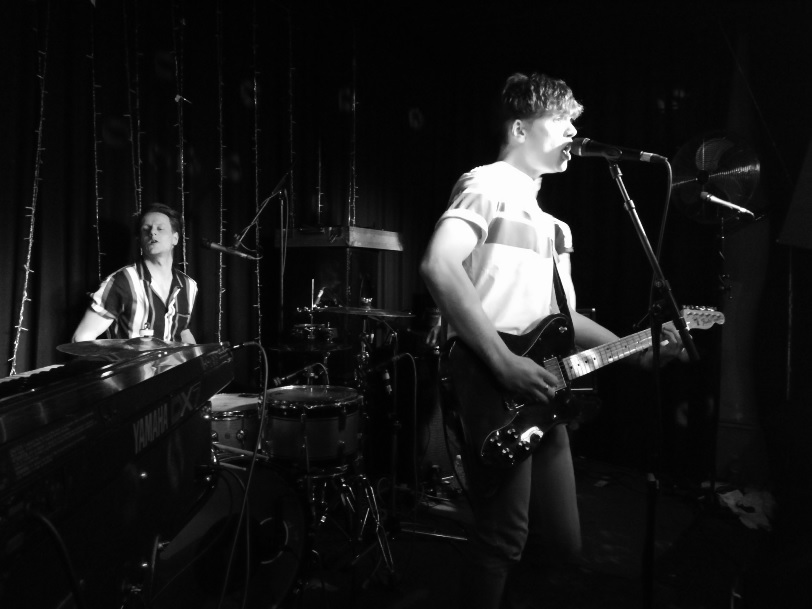 Jamie Delaney, Lenny Rout, Edd Paul and Johnny Vox make up the 4-piece Brit Wave band from East London known as Shiners, who managed to entertain a packed Prince Albert crowd. These guys could be considered to be in the mold of acts like Blur. The Shiners lads grew up listening to their parent’s punk and new wave records, while at the height of Brit Pop. As a result of this, they have learned to write catchy pop songs drenched in post-punk angular guitars, driving bass with late 60’s/early 70’s keys and punchy drums. Songwriter Jamie Delaney knows how to take pristine melody and gleefully smash it to bits. NL 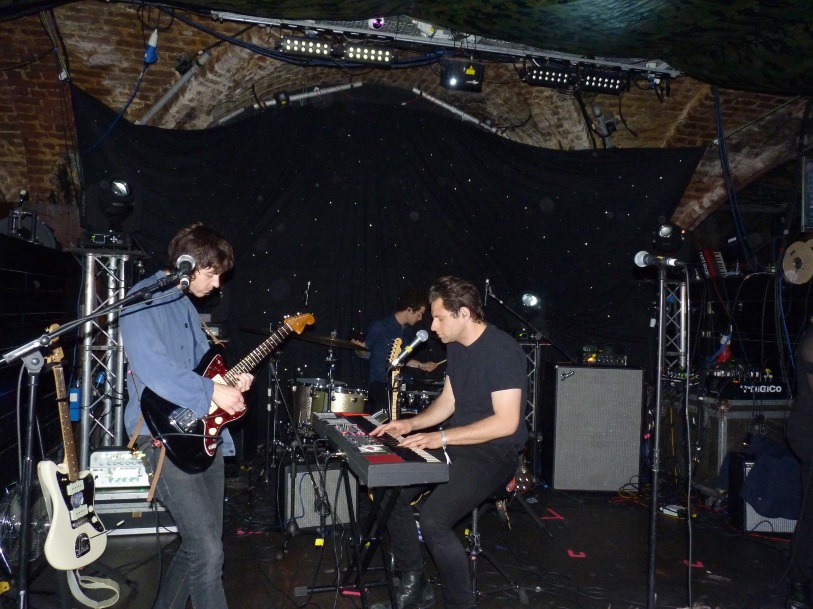 Hailing from Los Angeles and signed to Columbia records, Lo Moon definitely seemed to have the credentials to be quite a draw, and so it proved.

‘This is it’ was another stand out track on the night as they ably showcased their polished album. Lo Moon are a band very much on an upward path and you certainly have to respect what they are doing in trying to break the European market. MF 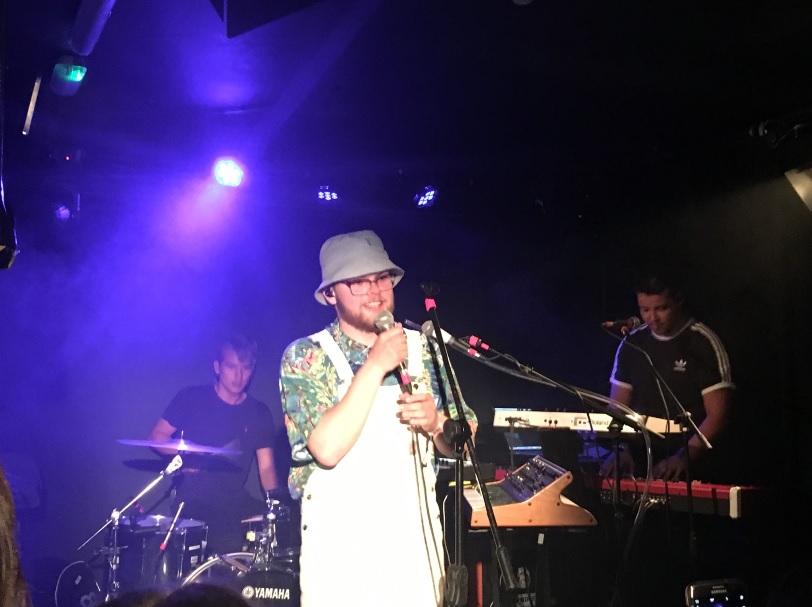 Nineteen year-old Copenhagen based Kops and his two band-mates delivered an entertaining half-hour of distinctive alternative synth pop. Their big sound complimented his distinctive and sometimes talk-box enhanced voice perfectly, which made for a very enjoyable set. Check out his tracks ‘Sorry Not Sorry’ and ‘Takes 1 2 know 1’ – both excellent. Oh, and he had very unusual dress sense – nice hat though! MF 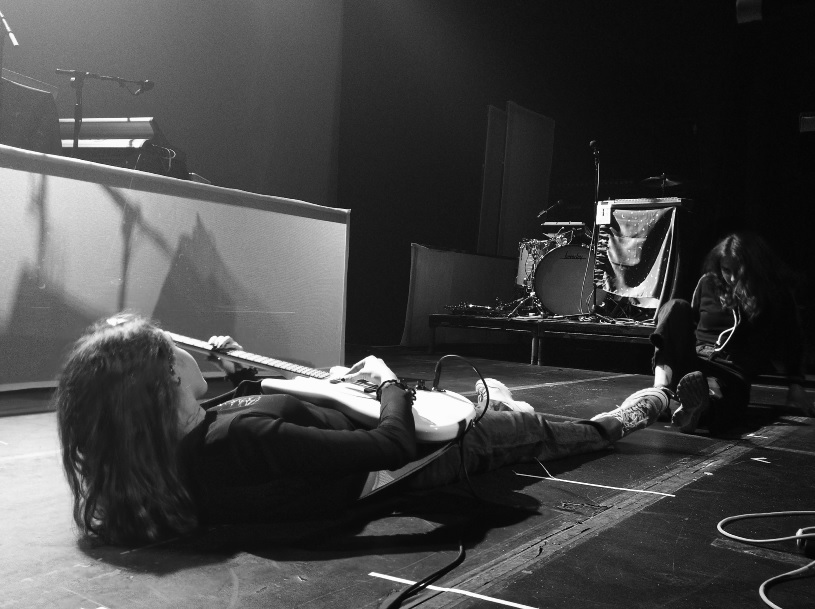 The highly talented multi-instrumentalists Rosa Walton and Jenny Hollingworth have been friends since they were four years old and undoubtedly have a strong friendship bond and clearly think alike, so it’s no surprise that their experimental alt-pop band Let’s Eat Grandma came into being in 2013.

The wildly imaginative young ladies do think outside of the box when it comes to their writing and performing, as there really isn’t anyone around who you could adequately be able to compare them with.

We managed to see them perform twice before at a previous Great Escape, prior to the release of their debut album ‘I, Gemini’ in 2016 and they were absolutely fantastic. So I partly knew what to expect this time around – handslaps, laying on the floor, switching keyboards etc and thankfully they did play my favourite track ‘Deep Six Textbook’ from the album. The Old Market crowd were treated to several new compositions from their forthcoming (29th June) second album ‘I’m All Ears’, including their finale, the epic ‘Donnie Darko’ (which will close this forthcoming album too). These girls are still in their teens and yet to have come up with so many varying styles of songs themselves is a rare talent indeed. This was easily one of my Top 5 favourite performances at TGE. NL 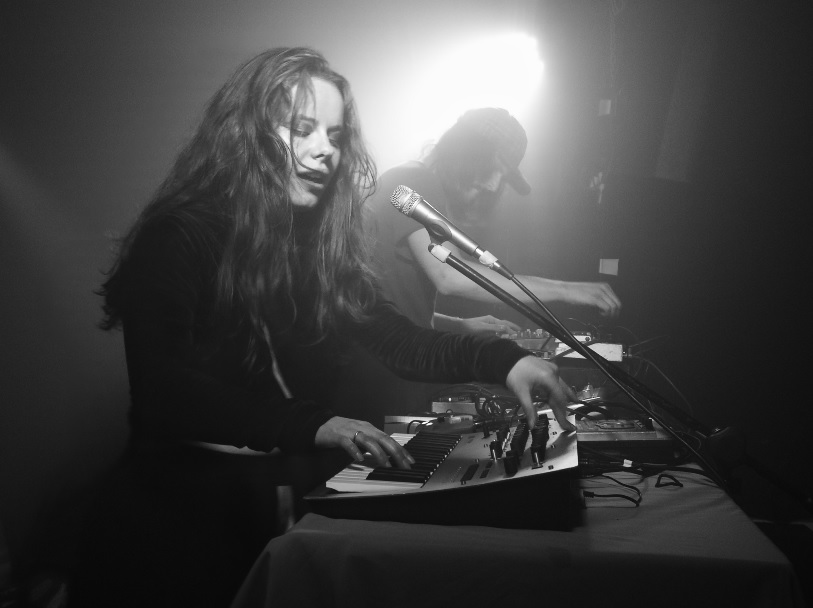 We witnessed the same performance as earlier on in the day, but the Komedia Studio Bar didn’t do their show as much justice as compared to the vast space from the One Church, plus we knew what was coming. Again a great performance, but not as good as earlier, through no fault of Free Love. NL