Hundreds of people crowded around a memorial on the Downs to remember the sacrifice of Indian soldiers who served and lost their lives in the First World War. 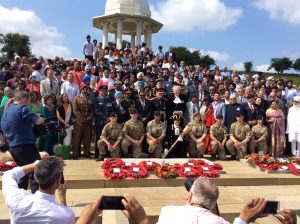 The annual pilgrimage to the Chattri

While many came from Brighton and Hove and the surrounding area for the moving ceremony, others made the pilgrimage from London and across the Home Counties.

In the centenary year of the war’s end, tributes were once again paid to those who died in Brighton having been evacuated there after being injured in action on the Western Front.

Among those laying wreaths at the annual memorial service at the Chattri were the Lord Lieutenant of East Sussex Peter Field, High Sheriff Major-General John Moore-Bick and the Indian High Commissioner YK Sinha.

They were joined by the Marquess of Abergavenny Christopher Nevill, the mayor of Brighton and Hove Councillor Dee Simson, council leader Councillor Daniel Yates and chief executive Geoff Raw.

The Lord Lieutenant said: “It is 100 years this year that hostilities ceased in the First World War.”
He said that soldiers from united India fought side by side with English soldiers and laid down their lives.

“We should never forget,” he said, those who stood with us – and we are reminded today of how multicultural we have become.

In Brighton, in particular, he said, people have long been keen to break down barriers.

Ending a passionate reply to the High Commissioner, the Lord Lieutenant said: “We will come back here year on year and we will remember them.”

Fifty-three Hindu and Sikh soldiers were cremated at the site of the Chattri – on downland just north of Patcham – and their ashes scattered at sea.

The bodies of 19 Muslim soldiers who died were taken to Woking to a burial ground close to Britain’s oldest mosque. 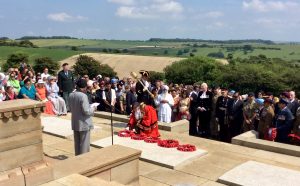 The story of the Indian soldiers in Brighton is told on the Chattri Memorial website and on the Royal Pavilion website.

The memorial event organiser Davinder Dhillon was recognised by the Prime Minister last year when she honoured him with a Point of Light award.

His small army of volunteers laid on Indian food afterwards at Dorothy Stringer School, provided by one of Britain’s oldest Indian restaurants, Punjab, of Covent Garden.