A multimillion-pound build-to-rent scheme is being planned for one of the biggest brownfield sites in Hove.

The developer Moda Living set out its vision for the Sackville trading estate and the neighbouring old coal yard in a presentation to neighbours at the weekend.

The company is hoping to build hundreds of homes with a continental-style concierge service and car club membership as well as fitness facilities such as gyms and swimming pools.

Tenancies would be for a minimum of three years and the mix looks likely to include dozens of people who are currently on the council’s housing waiting list.

Moda’s planning director James Blakey said: “We don’t sell. We rent. But we are a lifestyle not a landlord.”

The company was formed four years ago from a merger of two family businesses, the Caddick Group PLC and the Brooks family’s Generate Land Ltd.

The business has funding of £1.3 billion, including the backing of private equity firm Apache Capital Partners, and finalised the purchase of the Sackville Road site just over a month ago.

Moda is behind other build-to-rent projects in Birmingham, Edinburgh, Glasgow, Leeds, Liverpool and Manchester, with 6,000 apartments in the pipeline.

Tomorrow (Tuesday 10 July) Moda has a meeting with the district valuer to discuss what proportion of tenants will be entitled to “affordable housing” – or discounted rents – in Hove.

Mr Blakey told members of the Hove Station Neighbourhood Forum on Saturday (7 July): “We make a commitment for affordable housing on the site – and it’s tenure blind.”

He said that Moda was a forerunner in the build-to-rent revolution and added: “We would like to be on site starting to deliver this within 15 to 18 months and finished within two and a half years.“

The scheme would generate 20 to 25 full-time jobs on site after completion, Mr Blakey said, and they would include people working in the gym, pool, car clubs, etc. 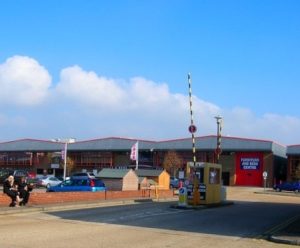 The entrance to the Sackville trading estate in Hove

Moda’s plans have emerged within weeks of members of Brighton and Hove City Council agreeing a build-to-rent scheme with Legal and General. About 200 homes are planned on the site of the Longley industrial estate, in New England Street, Brighton.

According to the company’s most recent accounts, Moda had an annual turnover of £21.9 million in the year to the end of last August, down from £27.4 million in 2016.

Elsewhere, the company recently agreed a partnership with Uber to incentivise Moda Living residents to give up their car park spaces in return for free private hire journeys.

Moda is aiming to submit a planning application for the nine-acre Sackville Road and coal yard site in about October and in the meantime is embarking on a pre-application consultation exercise, including with neighbours.