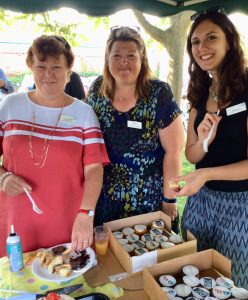 Staff and patients came together on Friday 6 July to enjoy a barbecue, inter-ward bake off competition and an interactive drumming workshop lead by Odi from Synergy Creative.

To mark the joint anniversaries, ward clerk Maria Byrne made a celebration cake which was shared by staff and patients.

All five wards also took part in the bake off competition with Brunswick Ward, the dementia unit, crowned the winners for their chocolate doughnut cake.

The hospital, which is run by Sussex Partnership NHS Foundation Trust, provides mental health inpatient and community services in Brighton and Hove.

The purpose-built hospital opened on Thursday 18 June 1998 and was designed to be spacious and airy. This was a stark contrast to the narrow, dormitory style wards that patients and staff had been used to.

Mill View is now home to five wards serving adults of all ages as well as providing a base for community teams.

“It was a revelation at the time for patients to have individual rooms rather than dorms. There was the old joke, ‘how do you knock on a curtain?’

“In our older buildings, patients had little privacy, community areas were dominated by smoking rooms and the layouts tended to be a warren of corridors which felt unsafe.”

The new building offered individual bedrooms and quiet spaces for staff and patients to step away from the busyness of the ward as well as activity rooms for group work. 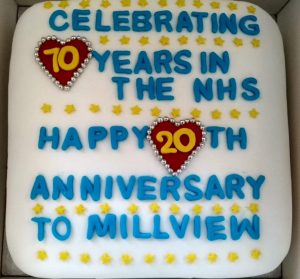 Community rehabilitation manager Ian McLuckie was a ward manager at Freshfield in East Brighton when the new hospital opened.

He said: “At first, patients were split between here and the old site at Brighton General.

“Once people started to get better they moved there and, of course, they didn’t want to go to such an old building after being here.

“So, it was good when the extension was completed and all our inpatient care was in one place. It meant a much better experience for patients and easier for staff to work together.

“Mill View’s 20th anniversary definitely shouldn’t go unrecognised. Having a building with proper facilities where people can be treated in one place has made a huge difference to our community and the people we serve.”