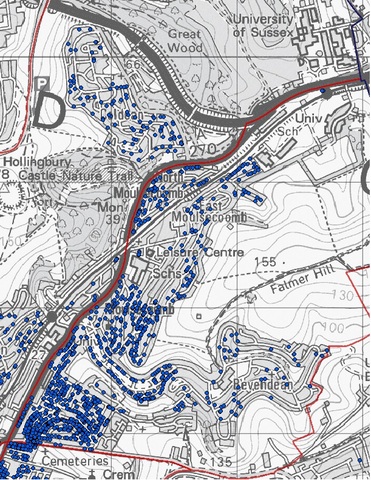 Councillors reluctantly gave permission for the conversions at 58 Staplefield Drive in Moulsecoomb,  96 Auckland Drive in Bevendean and 12 Twyford Road in Coldean.

During discussions at planning committee on Wednesday 18 July, planning officers showed where each home appeared on a map in relation to other houses of multiple occupancy (HMOs) in the area.

Labour Councillor for East Brighton, Nancy Platts said: “There is a general increase in the number of HMOs now and it is a problem.

“This takes us in the wrong direction. We needs to free up family homes.

The three properties are all in areas protected by article four, which means no more than 10 per cent of homes within 50 metres can be HMOs.

Moulscoomb and Bevendean Labour Councillor Anne Meadows pointed out six houses along Auckland Drive are already HMOs, adding her concern about the loss of family homes

Fellow Moulscoomb and Bevendean Labour Councillor Daniel Yates cited noise, inadequate parking and the impact on schools due to the loss of family homes in his letter of objection.

Hollingdean and Stanmer Councillors Michael Inkpin-Leissner and Tracey Hill opposed the plans to turn the Twyford Road house from three to six bedrooms.

Councillor Hill wrote: “It is absolutely essential that if this were to be approved, the number of occupants be limited by condition and permitted development rights suspended.

“There are numerous other examples, such as in Hawkhurst Road, where there was a planning application very similar to this.

“As soon as it was approved the bulldozers moved in and the property was completely gutted inside and a full width loft conversion and rear extension done to remodel it for nine rooms.

“This has been done with no permission in place and has generated considerable impact on neighbours and ill feeling.

All three were given planning permission, with Councillor Platts the only councillor who voted against each application.

However, all three were approved on condition that no future extension, enlargement or alteration is allowed.