Four arrested during drugs bust at The Level in Brighton

Four people have been arrested during a drugs bust at The Level in Brighton, Sussex Police said.

The force said: “A man and three teenagers were arrested during a drugs operation at The Level in Brighton over two days. 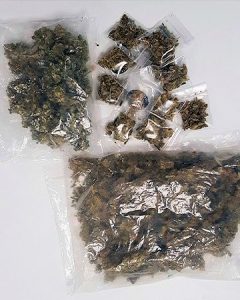 Cannabis seized at The Level in Brighton

“They were questioned and released under investigation.

“On Friday (17 August) a 23-year-old Brighton man was arrested after he ran from police officers through the children’s play area at The Level.

“He was detained on suspicion of possession with intent to supply cannabis after a large quantity of the drug worth several hundreds of pounds was seized along with cash and other drugs paraphernalia.

“He was also arrested on suspicion of possession of heroin.

“He has also been released under investigation.”

“We are also trying to identify drug users to direct them to agencies who can support them.

“If anyone suspects drug dealing is going on or has any information about it please contact us.

“You can report suspicious behaviour or drug dealing at our website or ring 101.”