Conservationists want to save a garage from being replaced by a two-bedroom house.

The garage in Holland Mews, Hove, is described as one of the last original coach houses in the street off Holland Road. 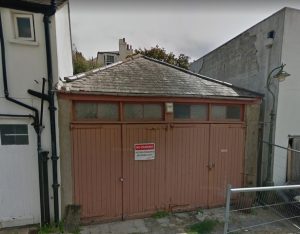 The Brunswick Town Association and the Conservation Advisory Group oppose the proposed demolition of the old garage.

The Conservation Advisory Group said that no effort had been shown in the conversion of “this fine example of equestrian architecture”.

The garage is not listed but it sits behind 29 Landsdowne Place, which has a grade II listing.

Research by the Brighton and Hove City Council Heritage Team found that a mews building existed on the site in 1866, which was linked to the Landsdowne Place house.

However, the front of the current building dates from the 1920s or ’30s.

The Heritage Team said: “It retains, if anything, only the original (1860s) rear and one side wall, which are not in any way unusual and are likely to exist in numerous other mews houses in this street and others near by.

“All the street frontage and roof is likely to be 1920s-30s so the building does not retain its original appearance or fabric.”

A previous application in 2017 for a three-bedroom house with dormer windows in the roof was refused.

In 2016 approval was given for a two-storey, two-bedroom house on the plot.

The current application for a two-bedroomed house includes dormer windows, allowing for the possibility of a third bedroom in the loft.

A report the council’s Planning Committee recommends granting planning permission at a meeting at Hove Town Hall next Wednesday (7 November). The meeting, which is open to the public, is due to start at 2pm.