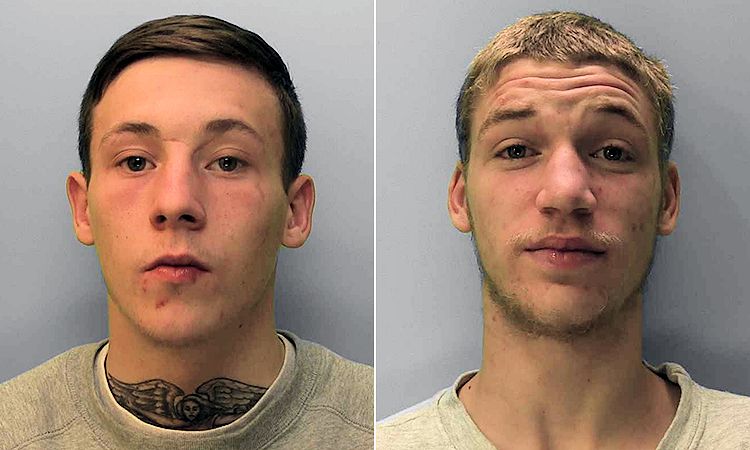 Two men have been jailed for a vicious attack on a man as he walked back from a funeral which left him with metal plates in his jaw.

But they were found guilty after a trial at Lewes Crown Court and were each sentenced to nine years in prison last Wednesday (31 October).

The court heard that the pair were “spoiling for a fight” as they walked along Olive Road in Hove on the evening of Friday 28 April last year.

They started an argument with a man and his cousin who were returning home from a funeral.

They punched their 36-year-old victim to the ground and then kicked him in the face breaking his jaw in several places.

He has undergone four operations and has metal plates in his jaw.

The court was told that the attack on him had shattered his confidence – and his cousin, who was also threatened by the men, was so traumatised she had left her job as a nurse.

A 17-year-old Hove girl, who cannot be named for legal reasons and who was with the pair when they carried out the assault, was also charged with affray and causing GBH with intent.

She denied both offences and was found guilty of affray but not guilty of causing GBH.

She was sentenced to 60 hours of unpaid work and a 12-month youth rehabilitation order.

Three witnesses who stopped and intervened during the attack were praised by the judge for their actions and recommended for £250 awards from the High Sheriff.

Detective Constable Rachel Piggott said: “This was an extremely violent attack on an innocent man walking home from a funeral.

“Gunn and Randall launched a vicious assault on their defenceless victim which has affected him physically and mentally.

“They have showed no remorse throughout and by denying the offence put their victim through the ordeal of having to give evidence.

“However, the jury did not believe them and they are now off the streets and behind bars.”