Chilled out Sunday evening at The Rialto with Haley 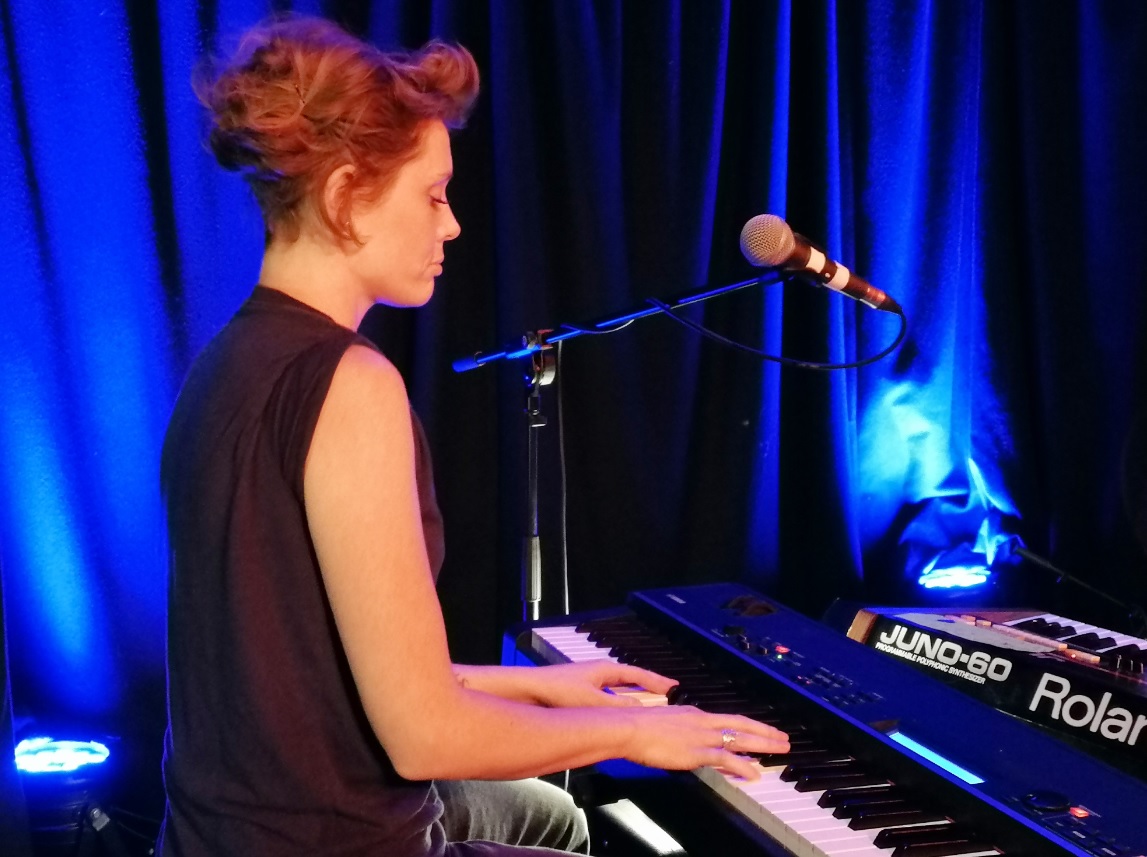 God I love Brighton. It’s a privilege having been born here and lived in and around the City all of my life. Yes I know that every city and town has its issues from time to time, but in the main Brighton is THE place to be. 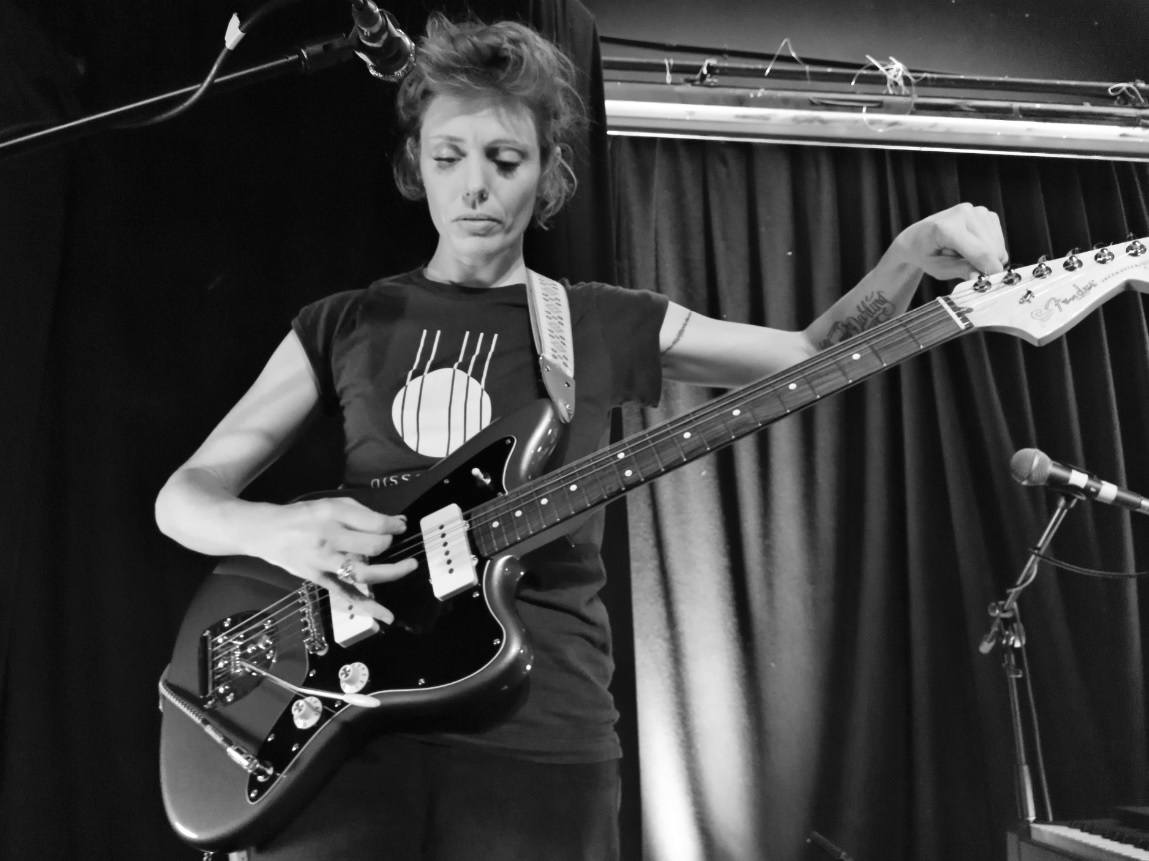 We often take it for granted just how lucky we are. There is a whole host of ingredients bubbling away in the melting pot each and every day that makes Brighton so incredibly vibrant and a magnet for such a cosmopolitan mix of people. I got the distinct feeling that tonight’s headlining artist HALEY (FKA Haley Bonar) has fallen in love with the city.

HALEY this evening performed at the atmospheric Rialto Theatre in Brighton to promote her distinctly different album ‘Pleasureland’, which came out last month (October). There is no doubt that she was in a reflective mood as this was the final night of the tour before she returns home to the United States where she resides (although she was born in Brandon, Manitoba in Canada). 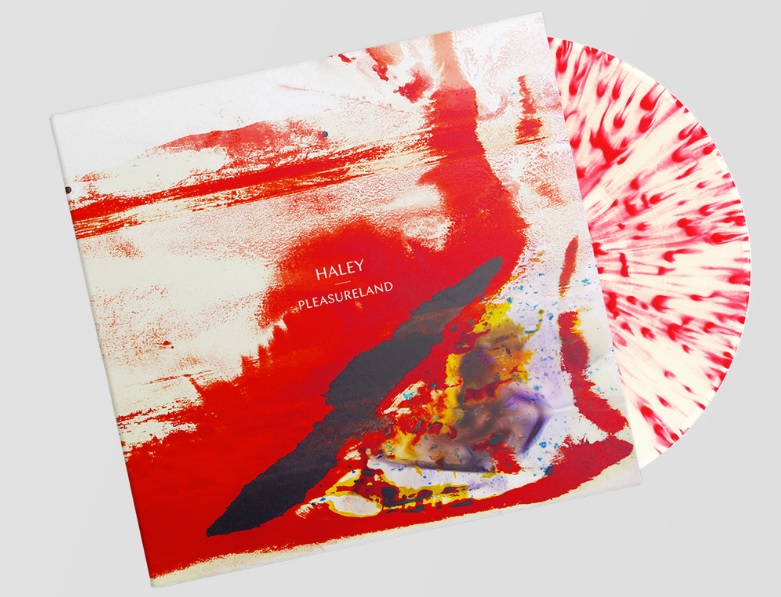 During the concert she even asked us about house prices down here, which as we know aren’t cheap, but she is clearly very disillusioned with the way that she perceives Donald Trump is running her adoptive land. She informed us that her new ‘Pleasureland’ album was created as a place of peace in order to escape from the political landscape in the US. So much so, there are no words on the album, she lets the music express her feelings. In fact, HALEY chose ‘International Women’s Day 2017’ to announce that she would officially adopt her mother’s maiden name (McCallum, a Scottish name meaning “a person of peace”). 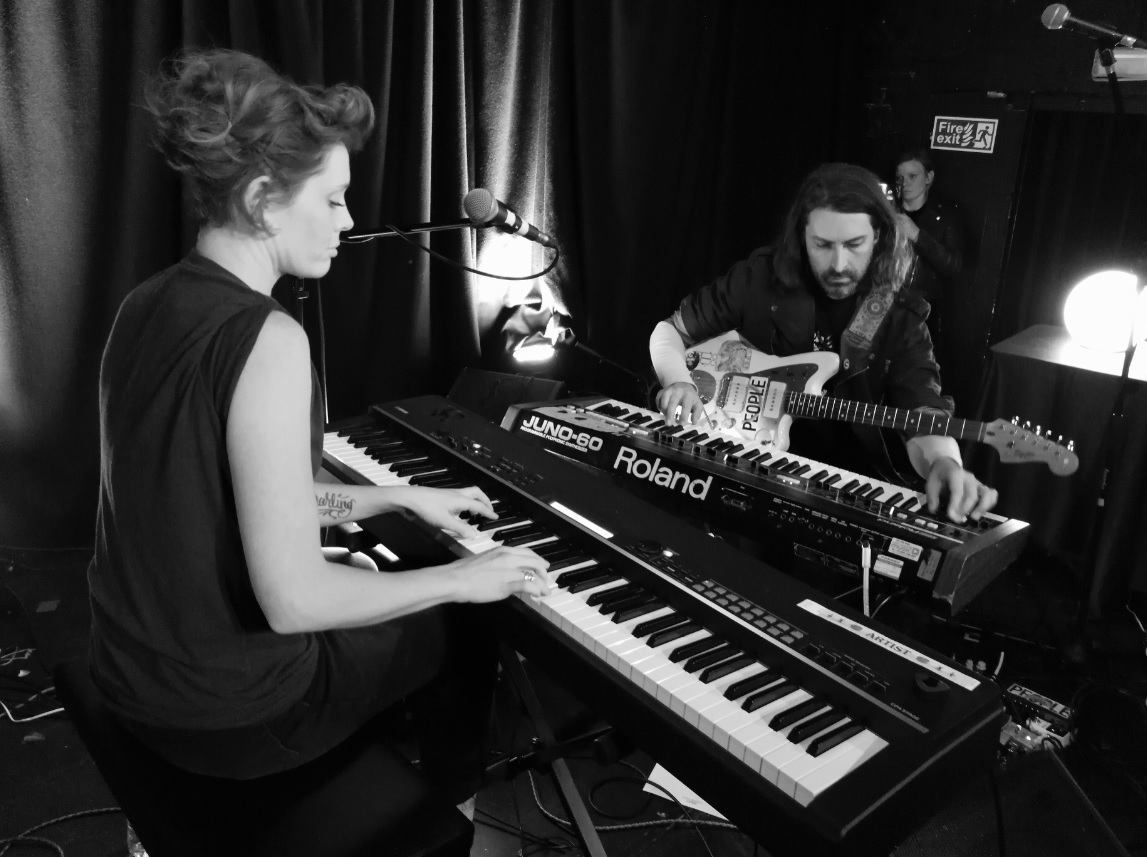 I would suggest that although HALEY has a great sense of humour as shown at our show, she is actually a sensitive and possibly even slightly fragile soul (not that there is anything bad about that!) who is clearly in-tune with the goings on in the world around her, particularly as she is a caring mother, so she obviously worries about the future that her daughter Clementine will inherit.

HALEY has even taken to writing music for Clementine and I noted during the gig that she was sporting a new ‘digital soundwave’ tattoo on her left arm which references a conversation that HALEY was having with Clementine when her daughter was four years old. The sound wave is also featured on ‘Next Time (For C)’ found on the ‘Pleasureland’ album. Also, no-one can miss the love Haley has for Clementine as below the soundwave tattoo, there can be found the words ‘Oh My Dahling’…Clementine. 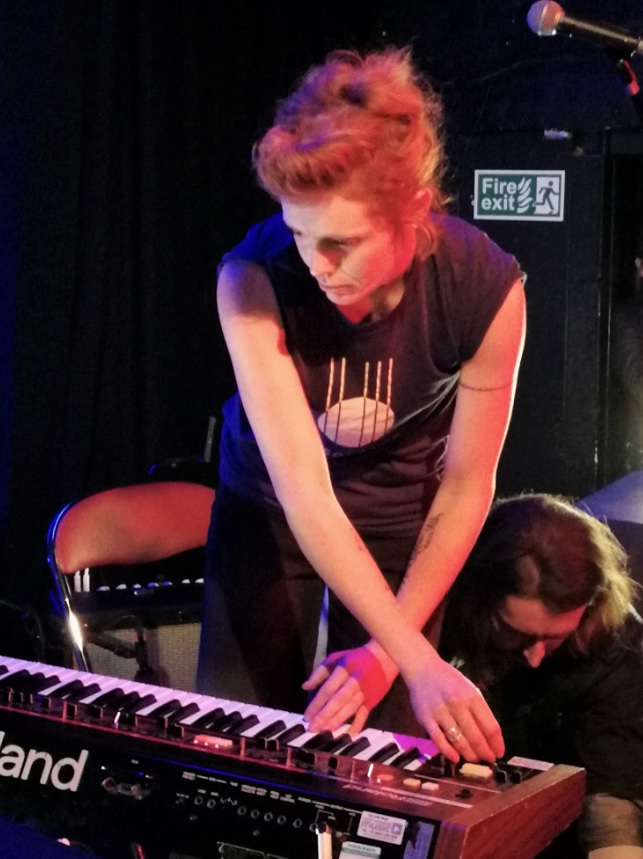 The audience at The Rialto were treated to a mixed set from HALEY and her musical companion Jeremy, as the concert started with five mesmeric instrumental piano tracks from the new album, before she picked up her guitar, found her voice and started rockin’ the joint much to the delight of the audience, finally returning back to the keyboard for three more delightful tunes. The more familiar HALEY sound featured on the next seven guitar tracks and finally a stunning encore of three tunes including the unplugged ‘Blue Diamonds Fall’ which reminded me very much of Nirvana’s ‘In Bloom’. See the setlist below for full listing. 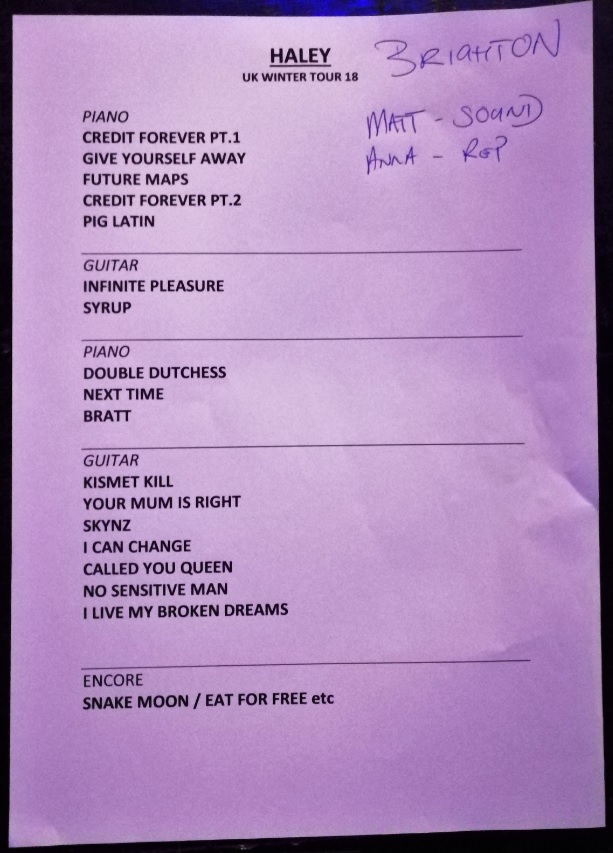 So what did HALEY think of Brighton? Well, she posted this on social media: “Magical city by the sea, Brighton pier/windy hair”. HALEY also expressed “Brighton on a Sunday is a subdued, swift current- the sea wind was extra wild, we played a fun and energised show to a standing club audience. Some bopped along and some were reserved and some were confused and some sang all the words”. HALEY added “Goodnight Brighton- thank you as always for your gritty sweetness, and the best goddam falafel wrap I’ve ever had at a place called Newroz”. 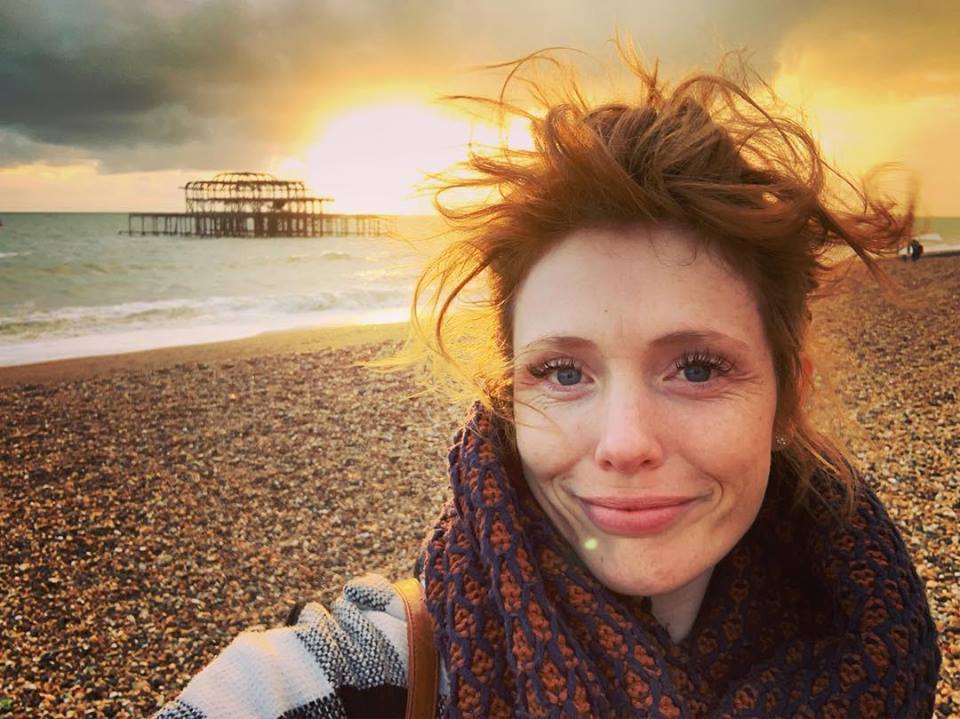 So if indeed she does decide to move to Brighton, I suspect that it won’t be far from Newroz in Preston Street! Clearly, HALEY enjoys performing in Brighton as she played the Green Door Store on 21st October 2016 and then at the Komedia on 27th March 2017, where she performed ‘Whole Wide World’ by Wreckless Eric.

Also on the bill tonight were Kacey Johansing and Tiger Lion. 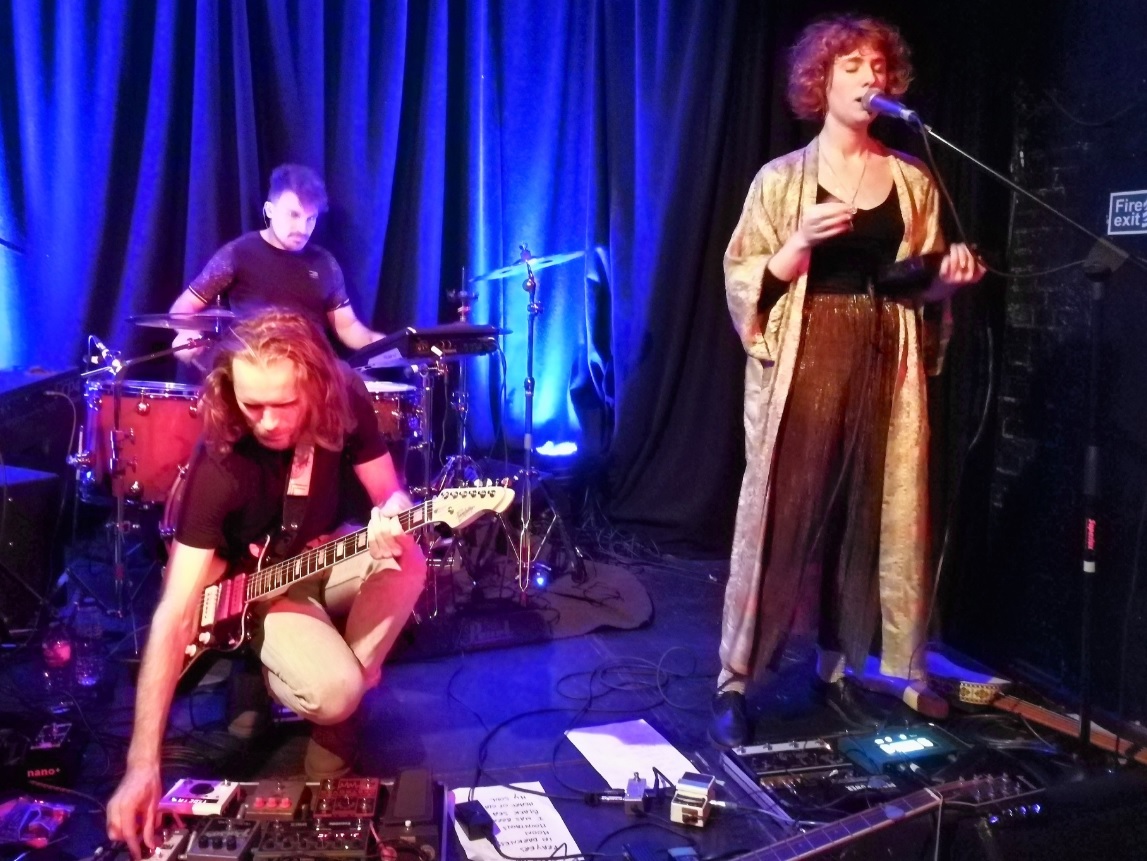 First up were Tiger Lion, who are a (mainly) French trio now based in North London, but have previously lived in Brighton. They are fronted by writer and visual artist, Clementine Blue with guitarist Geoffrey Papin and drummer Dan Breaden.

This evening, the charismatic Clementine was on vocal and guitar duty, but she also produced and played her favourite instrument the bouzouki. This is a pleasant-sounding instrument that is popular in Greece and was brought there in the 1900’s by Greek immigrants from Turkey. It quickly became the central instrument to the Rebetiko genre and its music branches. 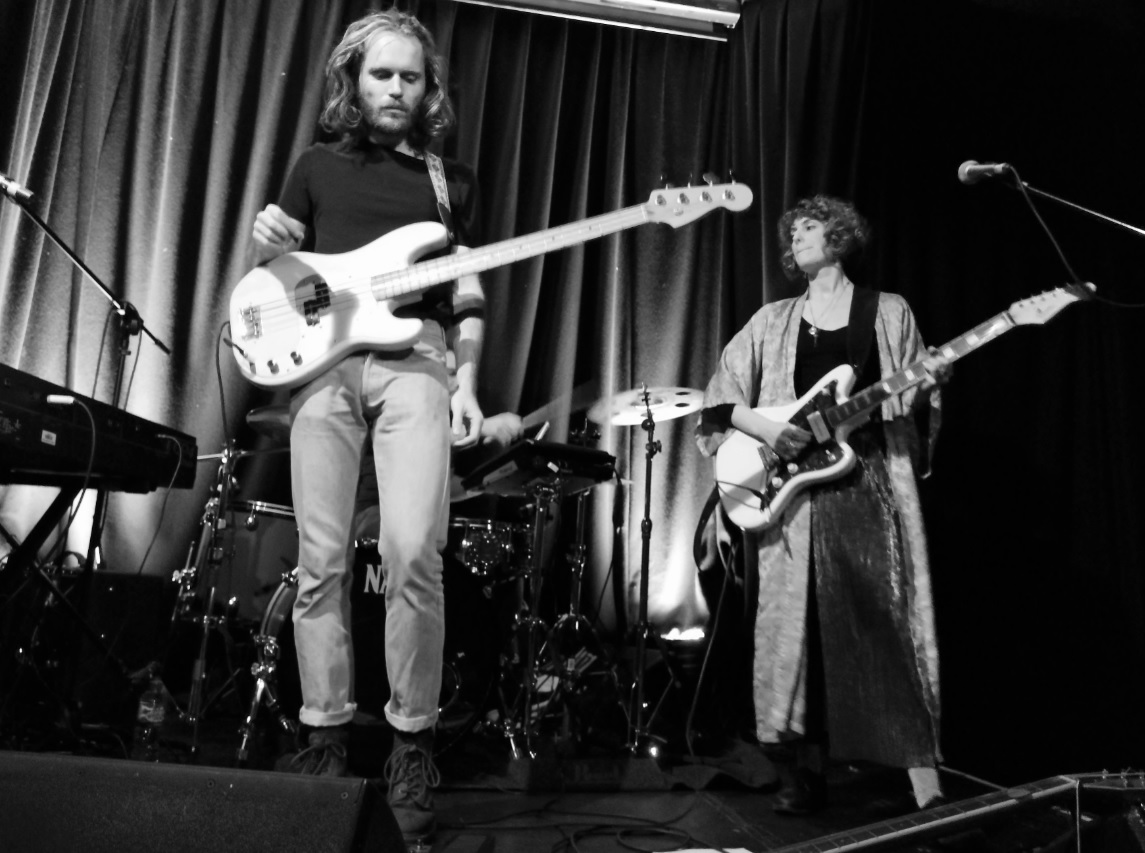 Last month, Tiger Lion launched ‘Black Sea’ in a remarkable bid to capture that perfectly imperfect dream-pop sound. This sadly was their final (and best) track of the evening, it was totally captivating, as captivating as Clementine’s eyes. Sadly, due to time restraints, their set was cut short by two tracks, however, if tonight’s performance is a sign of things to come from the band, then I’d love to see them again and would urge them to return to Brighton very soon. Tiger Lion would be the perfect band to play in The Great Escape in May. 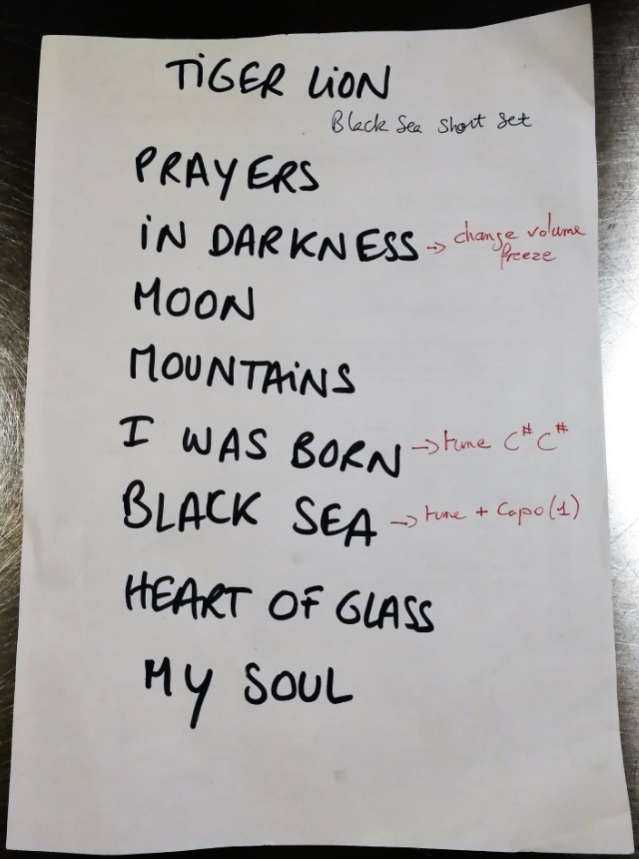 Tiger Lion’s setlist, although they didn’t get time for ‘Heart Of Glass’ and ‘My Soul’

Talking of which, a little bird tells me that Kacey Johansing will more than likely be on that bill. 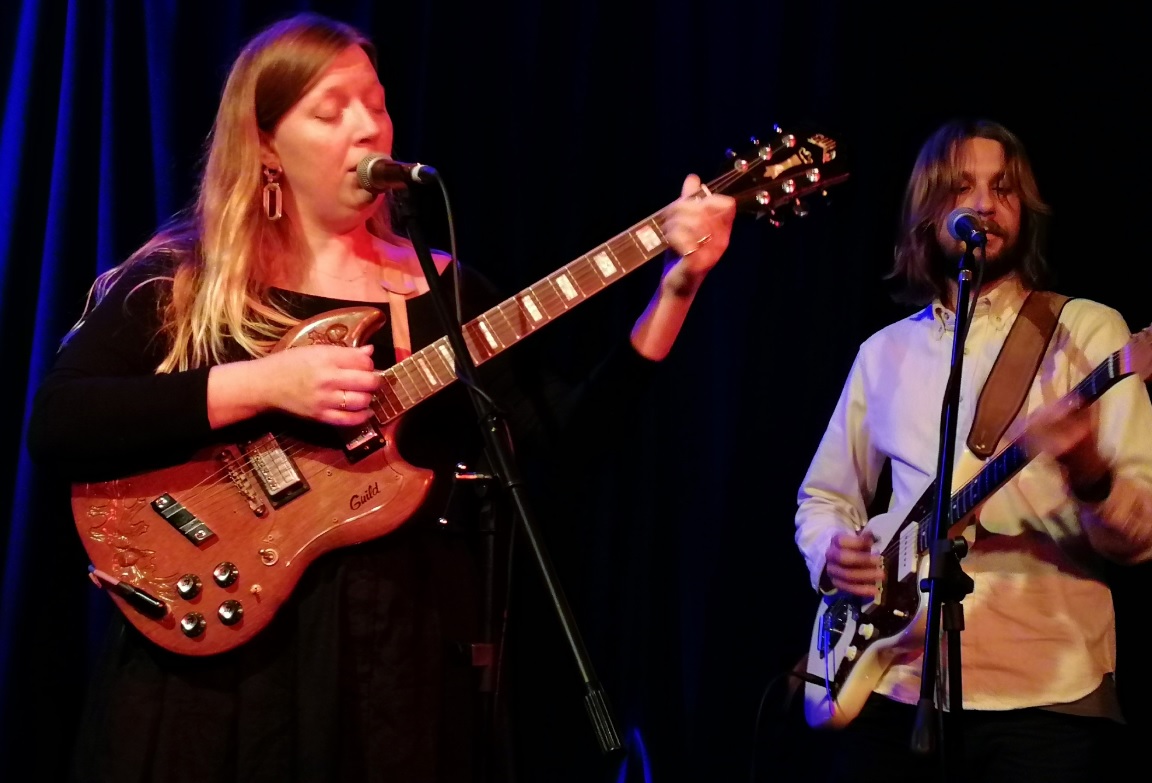 Kacey was here tonight at The Rialto with her colleague to perform compositions from her latest album ‘The Hiding’ which came out in June on Night Bloom Records.

American musician Kacey Johansing creates songs with meandering melodies, lush harmonies and moody aural landscapes, by weaving together elements of folk, jazz, pop and classical music, with her soulful, honeyed voice. Thankfully Kacey made it all the way through to the end of the Rialto set, as halfway through the previous night’s performance in Manchester, her voice disappeared. My colleague commented that her vocals on couple of tracks reminded him of Hope Sandoval’s bewitching voice. Hope was the singer of cult 90’s alt-psychedelic duo Mazzy Star. There were also elements of Stevie Nicks. 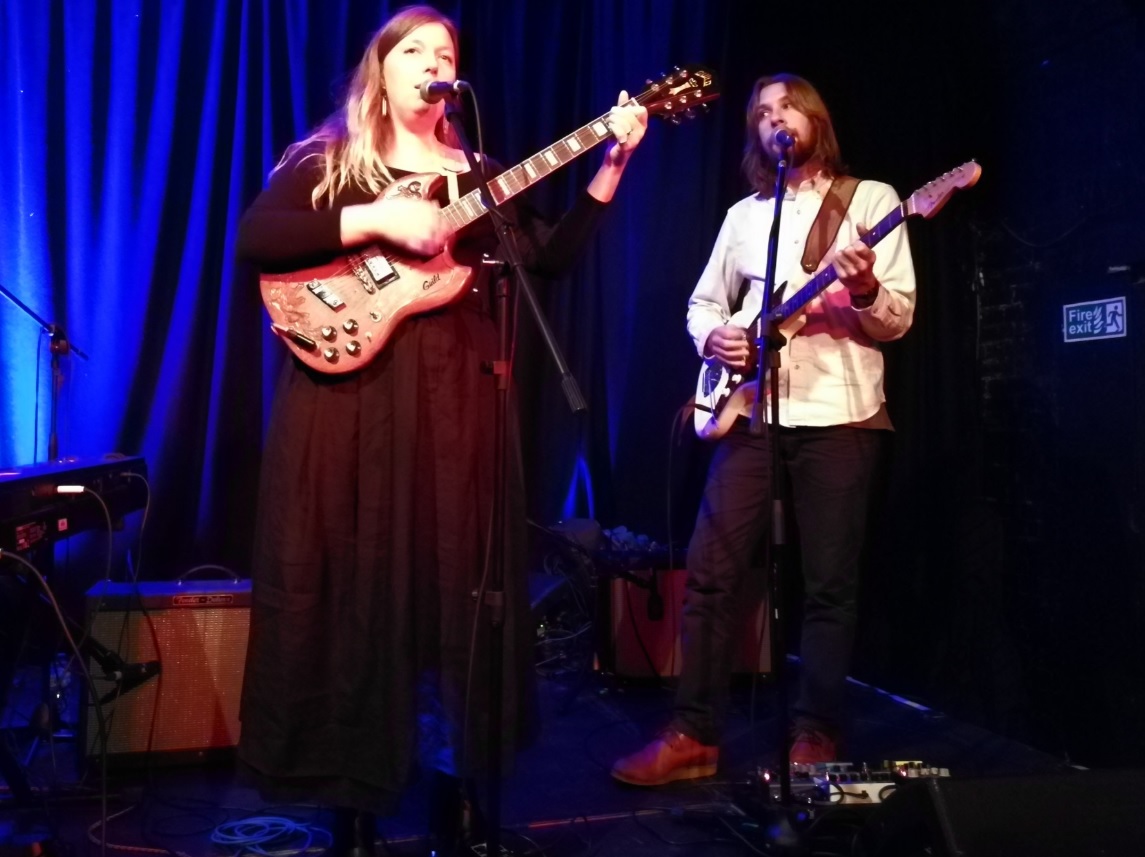 After the show, Kacey informed me that she is a fan of Fleetwood Mac, so there is no doubt where her influence lies. 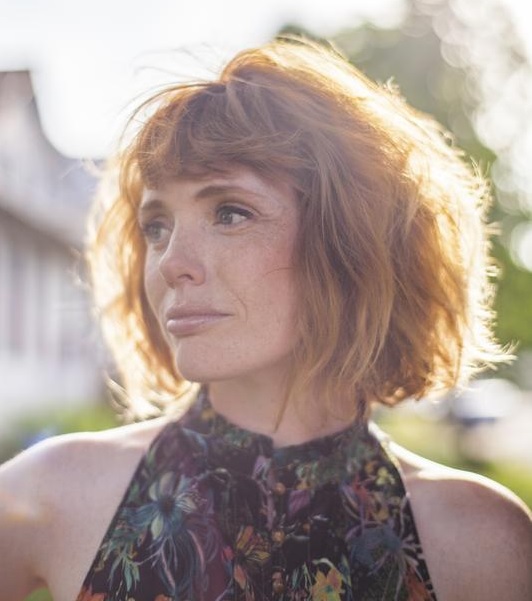 She was first discovered by Low’s Alan Sparhawk who spotted her at a local open mic club in Duluth, Minnesota and was so impressed he immediately invited her to join them on tour. This is how, a week later, nineteen-year-old HALEY was transformed from college student to ambitious dropout, crammed into a Honda Civic with a guitar and a drummer for company, touring the US opening for Low.

In the decade since HALEY has released a succession of recordings, each of which have garnered more praise than the last, and has seen her collaborate with the likes of Andrew Bird (with whom Haley occasionally plays live) and Justin Vernon (who contributed guest vocals to the ‘Last War’ album).

Her ‘Impossible Dream’ album picked up wild acclaim from the UK music press, followed by two sold out UK tours, and her debut appearance on ‘Later… with Jools Holland’ and she now performs and releases under the moniker Haley, the first fruits of which were the single ‘Bratt’, released for Record Store Day 2018. 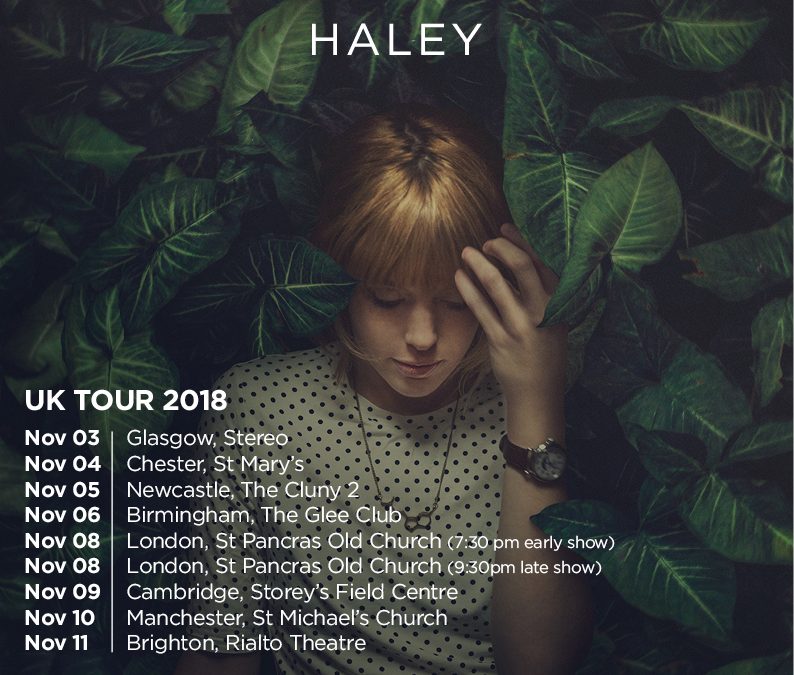 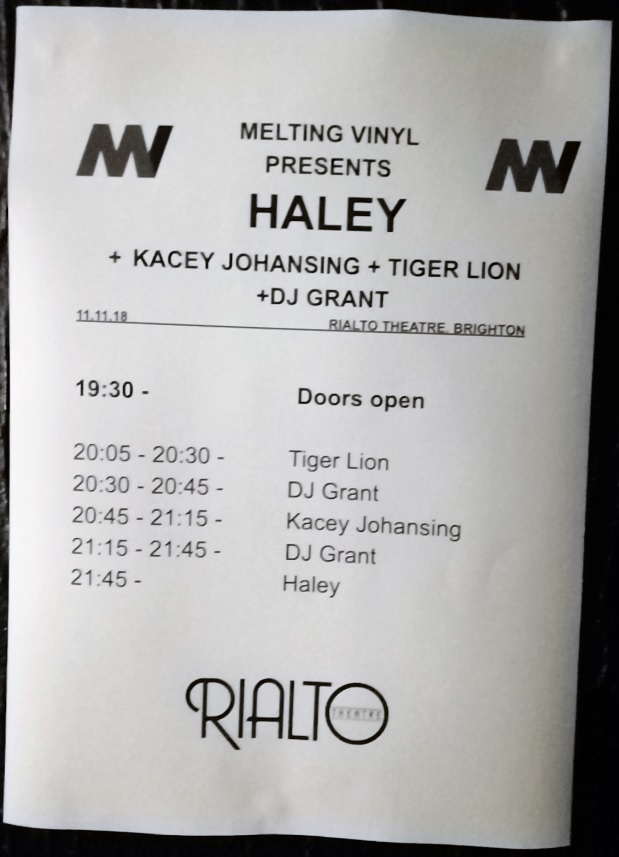