The Fish Brothers’ guitarist Dan Woods, who was also a renowned artist and founding member of Attila the Stockbroker’s Barnstormer, has died at his Brighton home aged 61 following a long illness.

Mr Woods studied art and illustration at Brighton Polytechnic, gaining his degree in 1979. He became known internationally for illustrating fantasy and folk tales, while larger-scale works were often on display in exhibitions, galleries and Brighton’s Old Police Cells Museum. 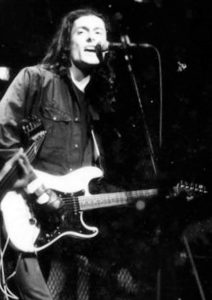 His skills as a guitarist and vocalist saw him play in bands such as Cleaners From Venus and Captain Sensible’s Family Butcher, also producing a number of album covers, cartoons and T-shirt designs for famous artists.

Mr Woods became a seminal member of The Fish Brothers, touring across the UK and Europe supporting The Levellers and releasing three studio albums and a number of singles and EPs.

He later joined with fellow Fish Brothers MM McGhee and Martin Fish to become part of Attila the Stockbroker’s band Barnstormer, touring extensively across Europe and releasing a number of albums.

Mr Fish, 51, said: “Boy did we have some good times – the Fish on tour with the Levellers up and down the UK, us all together with Barnstormer touring Germany every which way. The fortnightly duos in front of the fire at the Prince Albert. All that beer, all those fags, all that fun. I put on all the weight and he got all the girls. I’ll miss him terribly.”

Mr McGhee, 49, said: “When Dan and I went to Germany with Captain Sensible it was the first time I’d toured abroad and little did I know Dan and I would spend the next 30-odd years together sleeping in the same room, travelling in the same van and trying to outdo each other on stage.

“I cherished every bit of time we spent together, which was a lot. He helped bring laughter and fun to thousands of people at thousands of gigs.”

Fish Brothers and former Barnstormer bassist David Beaken, 39, also known as Baby David, said: “Over the last 20 years I can’t think of a serious problem I had or decision I had to make where I haven’t sat down with Dan and talked it through over a pint of Guinness. Dan was always there, he always had time for people.”

Mr Woods’s funeral will take place at 2pm on Wednesday 23 January at Woodvale Crematorium with the wake held at the Prince Albert, in Trafalgar Street, Brighton, a regular Fish Brothers gig venue.