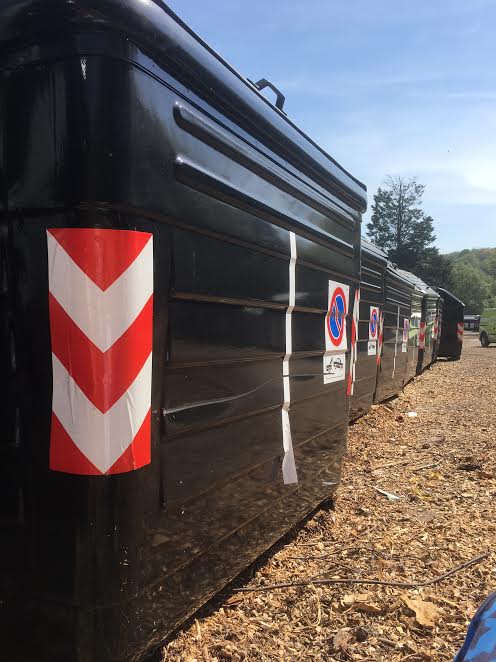 Colour-coded communal bins are set to be rolled out across Brighton and Hove following a trial which led to better recycling rates.

A communal bin recycling trial carried out from August to October 2018 in the Montpelier area of the city was designed to reduce levels of contamination.

All 1,791 households in the area received a leaflet about the trial in advance.

Bins in the trial area showed at least a five per cent reduction in contamination rate compared with other communal bins.

Other areas of the same round had 18 per cent contamination whereas the changed area had 13 per cent, with some bins down to six per cent.

Changes made during the trial included locking the bins with padlocks to prevent people lifting the lids for large items, removing brushes from the opening of the mixed recycling bins and adding no glass stickers on these.

During a drop-in public consultation session more than two thirds of people who came along side the updated signs helped them understand what they could recycle.

More than half of people surveyed in the trial area did not know they could recycle metal jar lids or aerosols – while a third wrongly thought you can recycle tetra-pak cartons and plastic pots tubs and trays through the council’s scheme.

As well as rolling out the colour-coded bins – or putting coloured lids on existing black bins – other steps CityClean is taking to improve recycling rates include a long-term education campaign and litter bin recycling.

He said: “Any of us who have had kids know they can come home and embarrass and pressurise us into changing our ways.”

“We are no longer creating as much recycling. The way we are measuring recycling is a blunt instrument.”

Green Councillor Leo Littman asked if recycling was being burnt due to contamination or lack of capacity, as cited in recent press articles.

In response, assistant director city environment Rachel Chasseaud said it was an issue with one specific round where workers had decided to collect recycling in black bags.

She said: “The contamination occurred with the best intentions of staff.

“At that level it became too much for Veolia to cope with. It wasn’t a case of capacity it was those loads being contaminated.

“We shouldn’t see that problem again.”