A security camera filmed a phone thief in action at an off-licence in Hove. 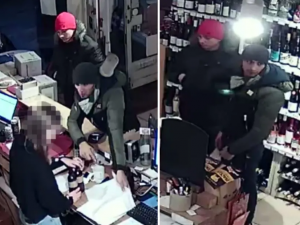 Sussex Police published pictures of the suspect and his accomplice today (Monday 25 February) and issued an appeal for help identifying them.

The force said: “Police have released CCTV images of two men sought in connection with a theft in Hove.

“At about 5.50pm on Monday 4 February they entered Quaff wine merchants in Portland Road and distracted a member of staff with a sheet of paper which they held over the counter.

“During this, they stole a phone which was on the counter under the piece of paper.

“If you recognise the men, or have any further information about the incident, please report it online or call 101, quoting serial 542 of 05/02.