We waited 489 days to see Professor Brian Cox in Brighton 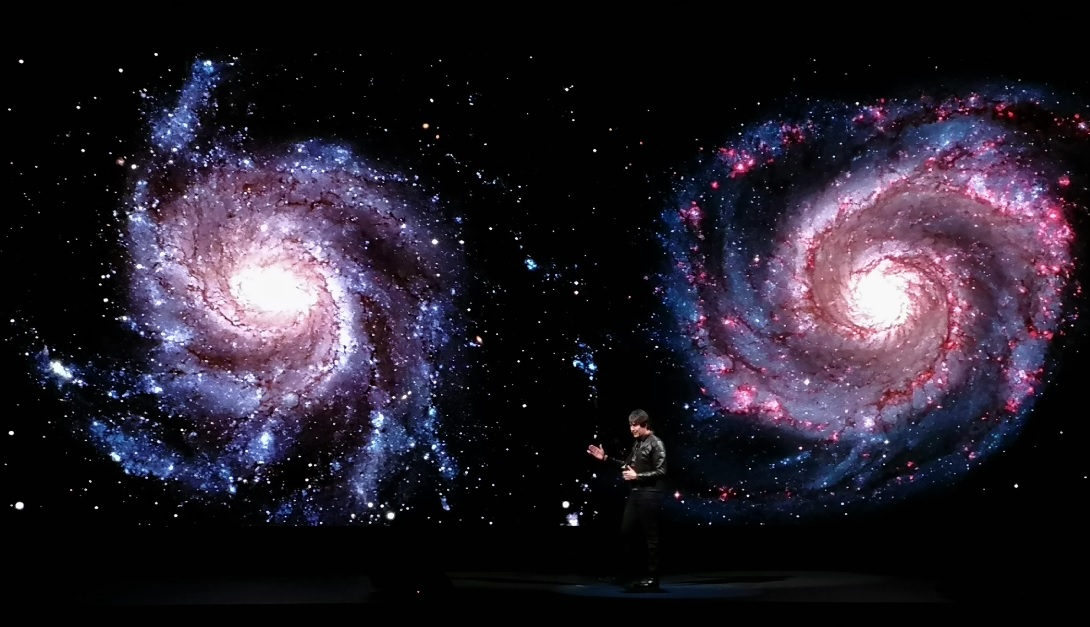 Finally the wait was over! It was announced on 25th October 2017 that Professor Brian Cox OBE would be coming to the Brighton Centre in 489 days time with his new ‘Universal: Adventures In Space And Time’ show as part of his world tour.

Was it worth the wait? 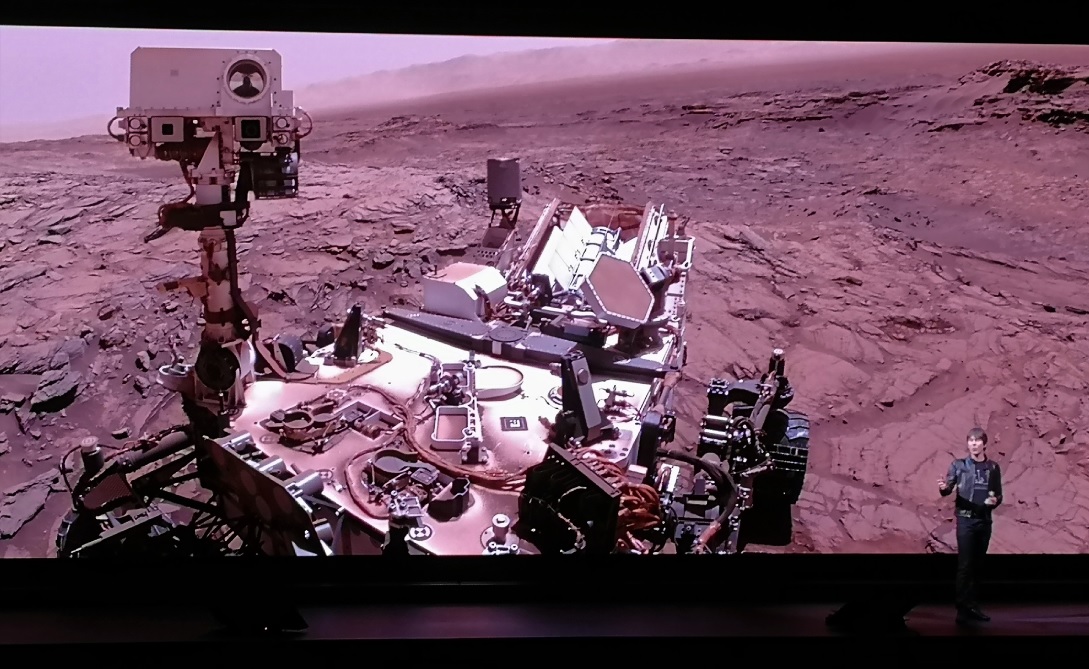 To be totally honest, although I have three box sets of his awe inspiring work in my DVD collection – ‘Wonders Of The Solar System’ (2010), ‘Wonders Of The Universe’ (2011) and ‘Wonders Of Life’ (2013) – I had no idea exactly how popular he was until this evening. He had totally sold out the Brighton Centre.

It was understandably an all seating event and I know that the capacity for concerts at the venue is 4,500 people, but Prof Cox stated twice during the evenings ‘lecture’, (which could not be a lecture according to him because of the price of the tickets – more on that shortly) that there were 3,500 people inside the venue. I had better not disagree figures with the eminent physicist had I? As no doubt he is correct. 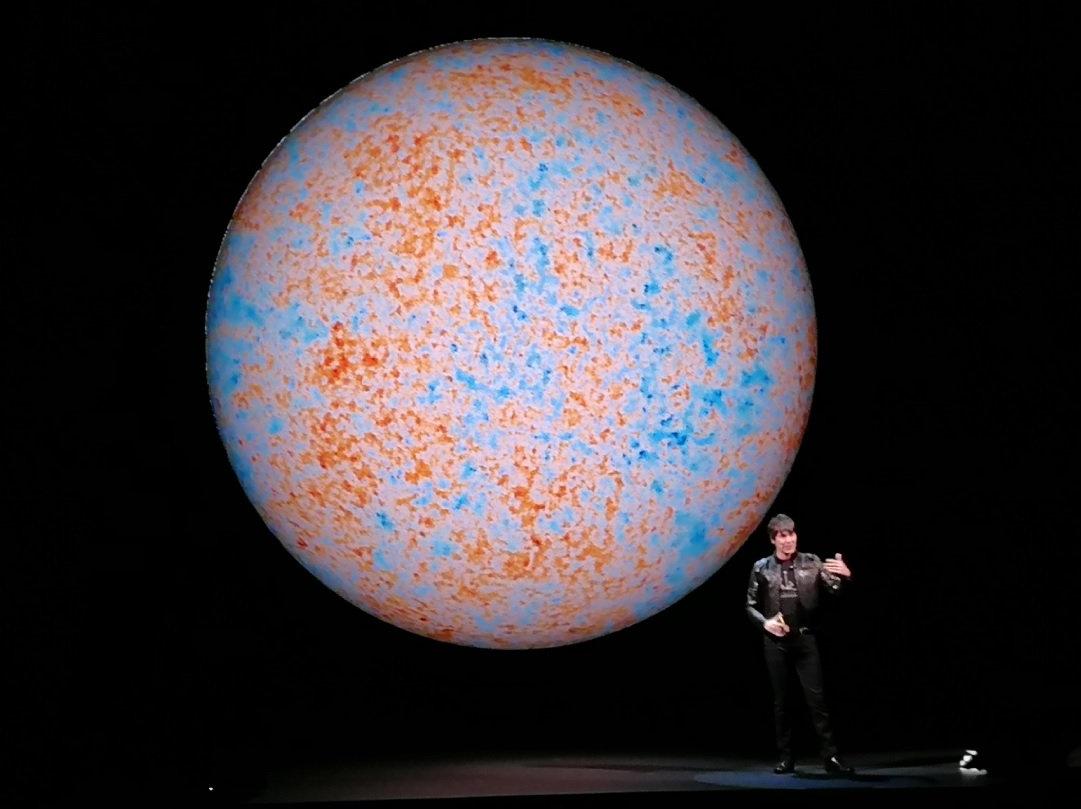 So, anyway, he has sold out the venue this evening, but demand has been so high that he has been forced to book a further two dates at the same venue on Saturday 14th and Sunday 15th September 2019. At this moment in time there are just a few tickets left for the Saturday date and Sunday is selling fast too. If you sadly missed the ‘performance’, and really wanted to attend, then here’s your chance. 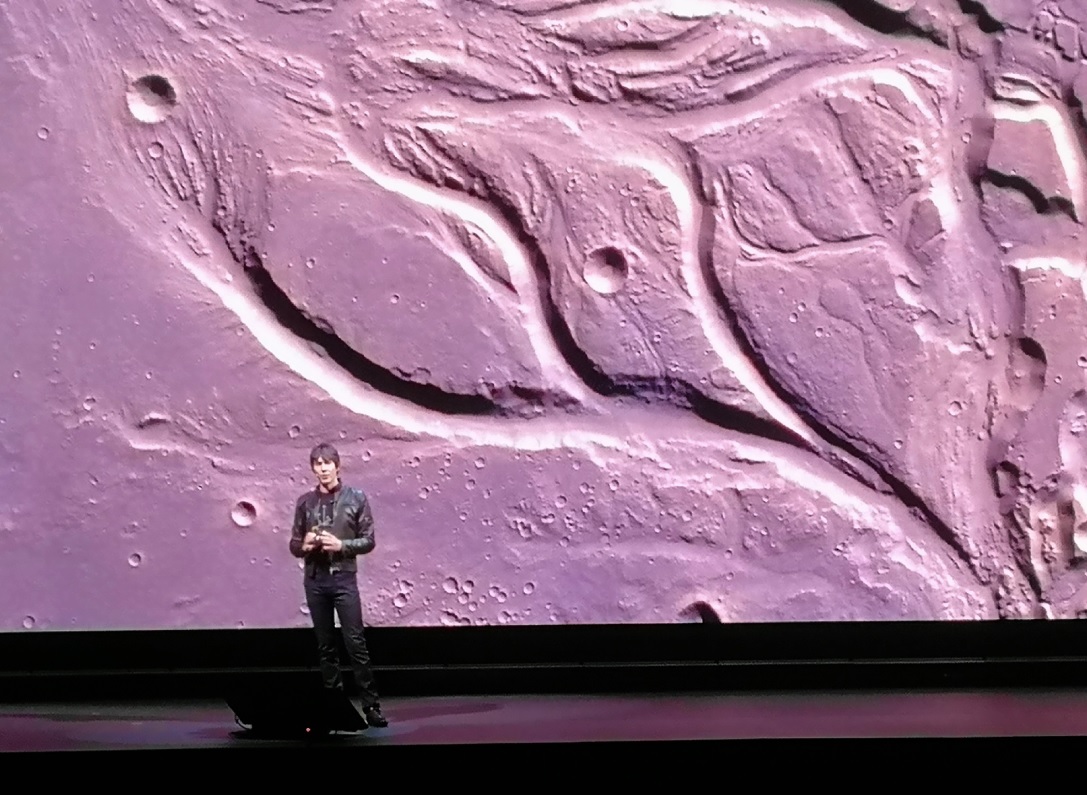 I have now become aware that he had previously set two Guinness World Record titles with his last sell-out live UK and Ireland tour. But I wouldn’t be surprised if he surpasses himself with this current ‘Universal: Adventures In Space And Time’ tour and he is heading off around the world with it. He will be calling into the USA and Canada in April and May with 21 dates, then he’s off to Hong Kong, Singapore, New Zealand and Australia in June for 11 performances. He will return to the UK in September for an additional 11 dates (having already appeared at 18 UK venues in February 2019) and then in October he will be doing the final 8 shows in Scandinavia, finishing off with a decent view of the Northern Lights at Longyearbyen on Spitsbergen Island, in Norway’s Svalbard archipelago. I have never heard of such an event taking place there before. Hats off to him.

Back in Brighton, I would like to emphasize exactly how big a business this tour is. Brian told us that there were 3,500 people in attendance and the ticket prices are £39 each, so that would give you a figure of £136,500 on entry prices alone. Then you can add the various merchandise that people were purchasing, such as I myself bought a programme for £10. (Now this is a milestone for Prof Cox as I haven’t purchased a concert programme since about 1985! But I couldn’t let the opportunity pass of learning more!). Other people were buying the decent Universal t-shirts in red/green/blue for £25 each, or sweatshirts for £40 or even a mug for £10, not to mention the various books on offer and wait for it….there’s even a 3.9% beer called ‘Cosmic Brew’ that’s apparently ‘out of this world’, that people could further go on and order! So this invaluable tour is big business and many thousands of learned people are thankfully giving their support.

Prof Cox was this evening taking the audience (whose ages ranged from around 8 years old to 78 years old!) to the edge of our current understanding about the origin and evolution of our Solar System and the Universe. He was offering us a fascinating insight into the workings of nature at the most fundamental level. Whether you were an avid science reader or a total novice, Professor Cox was proposing challenging ideas and making them accessible to all. It’s here that I must say that, if you weren’t totally concentrating for all of the first hour of the show and then after a 20 minute break, the following hour of the show, then it’s likely that you wouldn’t be getting the full benefit of Brian’s knowledge. The man’s a cool dude as he loves Joy Division (well done lad!) and he certainly knows a vast amount of information, so much so, that my eldest son who attended the show with me, was wondering whether he actually has a photographic memory. However, we were at times treading a thin line of being blinded by science, but then Robin Ince would take to the stage and liven up the mood.

The award-winning comedian Ince is actually the co-host of the BBC Radio 4 comedy and popular science series ‘The Infinite Monkey Cage’ along with Prof Cox, so they were a good double act, with Ince overseeing an audience Q&A, and thus giving fans the chance to ask any questions they had via the usage of modern technology and thus making tonight’s show rather unique. I was pleased that Ince had selected the questions from his iPad that had been raised by tonight’s younger members of the audience. I can recall at least 4 of them being from the 10-14 bracket and they were valid questions too.

It was evident that Ince was a family man and lent towards asking Cox the questions from the future guardians of our planet. Ince recounted a time when he and his son would go off into the woods and over a period of time, they would construct a den. He read us his poem about this, entitled ‘Is This Our Final Den?’. It has some resonance with myself sitting there with my child (who is actually now 20) as I too can remember fond days out just like that and you are wondering during the passage of time, that will this be the last time that you ever do something together as you child was growing up and you wanted to hold onto that childhood as long as possible. 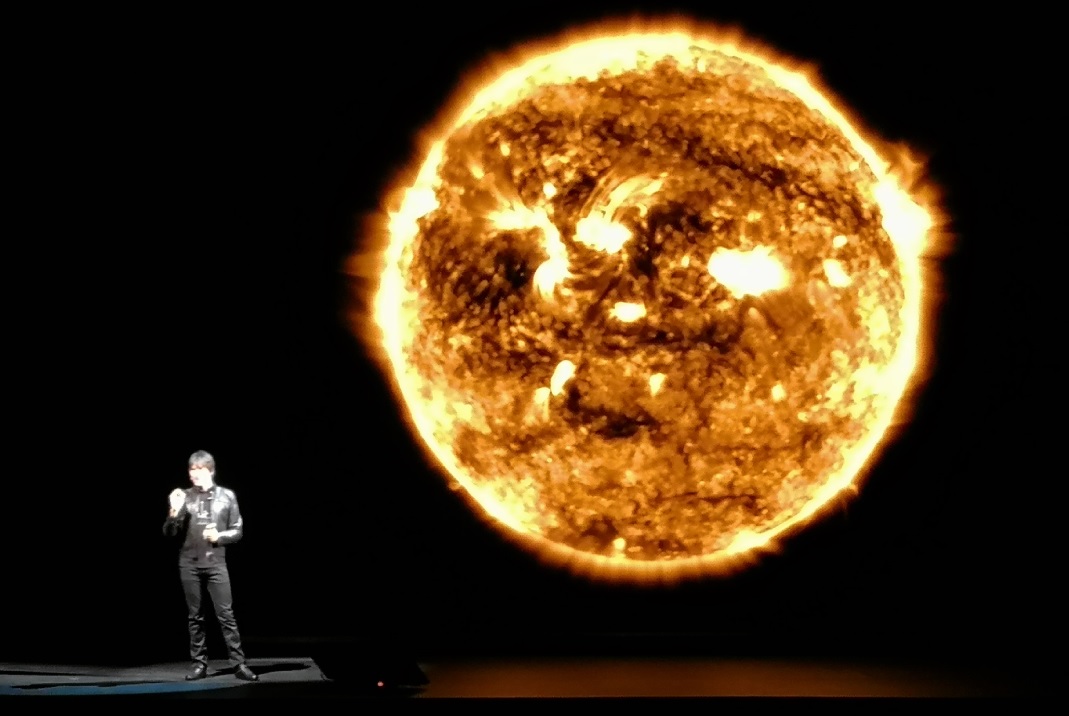 And so along that theme Cox was exploring the space time theory as well as the vast, possibly infinite universe and our place within it from Earth to the edges of the cosmos. This was successfully delivered with the assistance of a giant crystal clear backdrop that Cox could control with remote that he held in his hand. The images of galaxies, stars, planets and the cosmos taken from Hubble Space Telescope and so on, were just stunning and the accompanying soundtrack went hand-in-hand with it. But sadly no Joy Division.

Both my son and myself found it really interesting when Cox was discussing about the concepts in the blockbuster movie ‘Interstellar’, which is my sons favourite ever film as well as for myself being right up there, behind ‘Bladerunner’.

You have to concentrate when Cox is explaining the information to us lesser mortals, but don’t get me wrong, he’s not a big head, he’s a rather grounded bloke really, but with his head in the stars….and other galaxies. 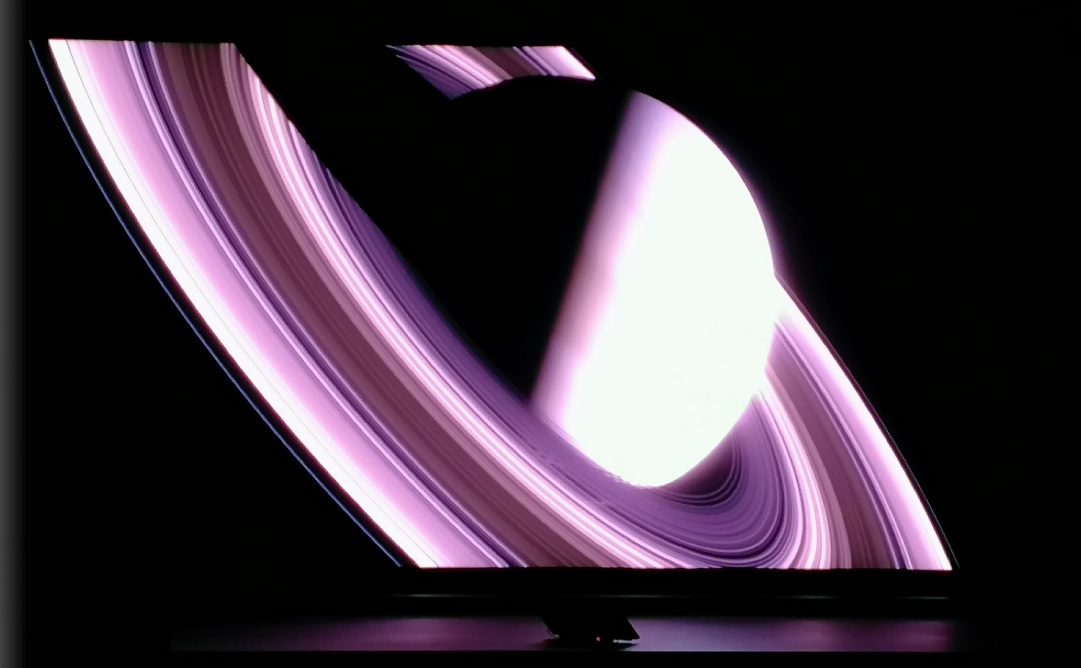 In conclusion, the whole point of the evening was educate the masses to look after our fragile planet above us all. Above family and self. We only have one planet and one chance during this life, so let’s not mess it up!

If this is your idea for a wonderful enlightening evening out, then I would strongly suggest that you purchase your tickets for Professor Brian Cox’s Universal Global Tour at the Brighton Centre on Saturday 14th and Sunday 15th September 2019. Grab them HERE.

If you have two and a half hours free, then you should chill out and watch THIS. 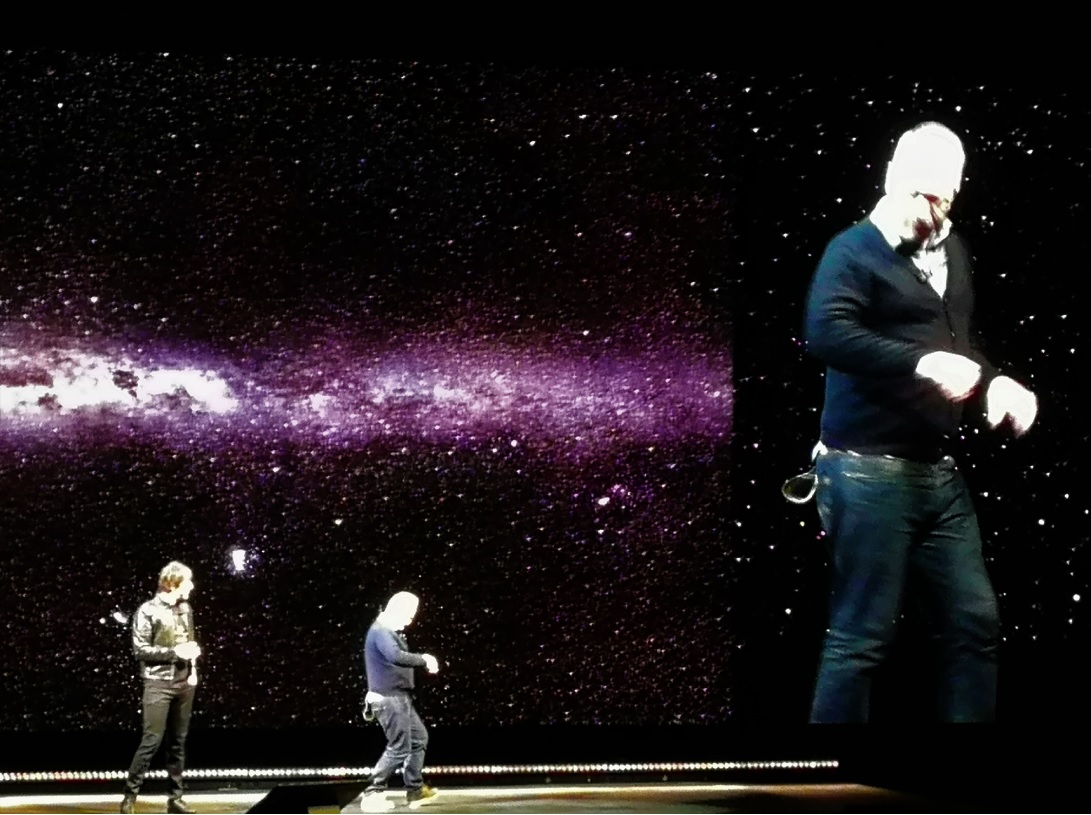 As a broadcaster, he has presented a number of highly acclaimed science programmes for the BBC, boosting the popularity of subjects such as astronomy and physics and garnering a host of accolades, including two Royal Television Society awards and a Peabody Award for ‘Wonders Of The Solar System’.

He has also authored a series of best-selling books, including the widely acclaimed ‘Human Universe’ and the recently released ‘Universal: A Guide To The Cosmos’, and is recognised as the foremost communicator for all things scientific.

His critically acclaimed BBC series, ‘Forces Of Nature’, aired in 2016 whilst he recently once again co-hosted ‘Stargazing Live’. He holds two Guinness World Record titles for a science tour for his total sell-out debut tour, which began in 2016 and saw over 150,000 attend in total, including a sell-out show at The SSE Arena, Wembley. Oh and errr he likes Joy Division! Did I say that? 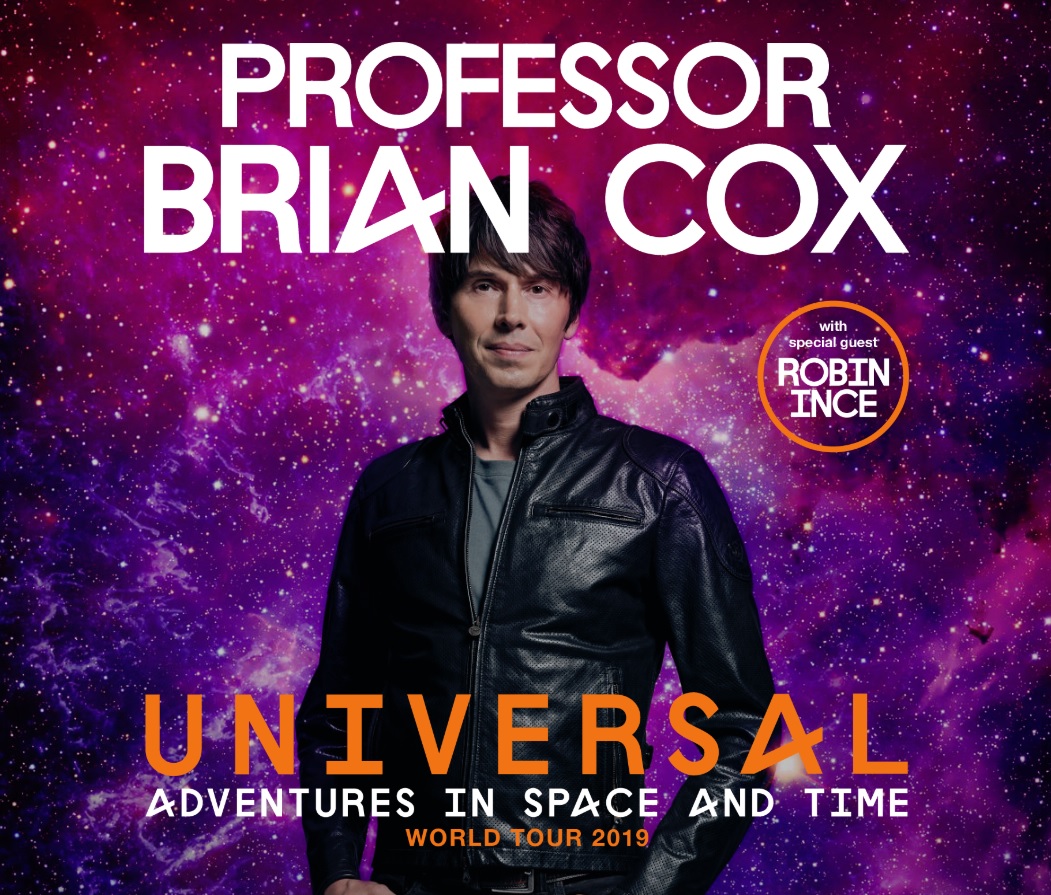